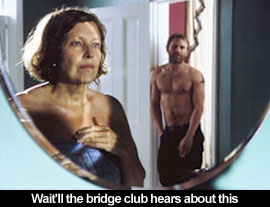 by Bill Chambers The latest from Roger Michell, The Mother seems die-cut for Stephen Frears (it was scripted by Hanif Kureishi, author of Frears's My Beautiful Laundrette and Sammy and Rosie Get Laid), and one can imagine it having attracted Ken Loach or Mike Leigh with only minor tweaks. If we're not exactly stuck with Michell, he's florid in a way that Frears is not and in a way The Mother does not call for; the movie's look, though attractive in and of itself, is a syntax error. From the three Michell pictures I've seen (Titanic Town (which I barely remember), Notting Hill (which I like), and Changing Lanes (which I really like)), the director's specialty seems to be equalizing peculiar material through dynamic imagery, thus imbuing it with commercial appeal. It's a phenomenal talent, but one that betrays him on The Mother by making glib the film's subject matter. In Michell's hands, a relatively working-class set of characters becomes incongruously bourgeois through sensuous camera moves and catalogue-ready tableaux accentuated by not only walls of Kubrickian white, but also a decidedly 'upscale' piano score.

The remarkable Anne Reid, a veteran of British TV (as is most of the cast), assumes the Jeremy Irons role in this inverted Damage playing May, a grandmother widowed in an early scene by the sudden if audience-anticipated passing of husband Toots (Peter Vaughan). Refusing to return to an empty home, May is alternately hosted by her two grown, passive-aggressive children, Bobby (Steven Mackintosh) and Paula (Cathryn Bradshaw), the latter of whom is involved with Darren (chameleonic Daniel Craig, previously seen in Road to Perdition and Sylvia), the married carpenter building an observatory in the house of the former. May, endeavouring to decipher her daughter's masochistic streak (which includes, in May's opinion, Paula's creative-writing aspirations), confronts Darren about Paula, only to find him irresistible herself.

That dangerous liaisons ensue between May and Darren is both predictable and inscrutable. Half the reason we go along with it is that infidelity is a cinematic institution, but rationalizing an action is not the same as justifying it. The Mother is so savvy-looking that second-guessing it feels petty, at least in the moment, yet Michell's modernist gaze undeniably demolecularizes these people: While May, et al contradict themselves like we do, their motivations are nigh inaccessible without the window into the soul of the hoi polloi that a neo-realist aesthetic provides. Darren enters into an affair with May wearing too many blinders; at the risk of sounding insensitive, Reid doesn't exactly radiate sensuality, but the movie lacks even the grit to infuse Darren's sexual bravado with pity. Craig is stuck essaying a love machine--the kind that doubles as an objet d'art. And what to make of the film's coda, in which May's comeuppance is depicted from her literal point-of-view? With form and function being at odds throughout The Mother, Michell's shift to a subjective camera is maddeningly presumptuous at best. He has to hijack an identification with her. Originally published: July 7, 2004.