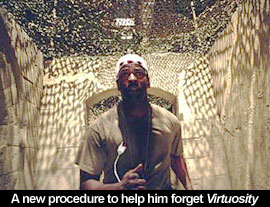 To be confronted with a redux of one of the quintessential McCarthy paranoia flicks in this day and age speaks volumes to the depth of the schism in our society and the terrible breadth of our mistrust in the government. The idea is that our neighbours could be our enemies and that our leadership could be working towards purposes other than our well-being--fears that make sense in a world that saw as a reality a dozen men living ordinary suburban lives board airplanes willed to crash into symbols of our financial and political autonomy. In a way, The Manchurian Candidate is a product of a United States that has had the Red Scare borne out to be true--and the Cold War threat of sudden Armageddon made real.

The world in which Gulf War I vet Ben Marco (Denzel Washington) exists is one where twenty-four hour news channels feed a constant stream of mundane atrocity into the hearts and minds of the American people. New locations are being bombed into precision rubble by the United States with no justification offered either the citizenry or the world community, and a generation of lost boys has come home from the war with psychic scars and un-scratchable itches. Marco starts having a dream, not of a garden party, but of a bunker in which he and his compatriots are wired up and inseminated with the delusion that wet blanket Raymond Shaw (Liev Schreiber) is the kindest, gentlest, most courageous man they've ever met.

Now a senator tabbed as the youthful vice presidential running mate for a stentorian Democrat (an honour lubed by his oily New York senator mom, Eleanor (Meryl Streep)), Shaw himself seems to be troubled by visions and self-doubt. His lingering infatuation with Jocelyn (Vera Farmiga), a distant fling and the daughter of Senator Thomas Jordan (Jon Voight), has been transformed from the healthy summer romance of Frankenheimer's The Manchurian Candidate into an unhealthy and pathetic fixation. That element of the arrested is the tragedy that drives The Manchurian Candidate 2004: it's obvious in the sad relationship between Shaw and his mother, and clarified in the inability of anyone in Shaw's company, Marco included, to continue in their lives successful and self-satisfied.

In our introduction to Marco, he's addressing a group of Boy Scouts about Shaw's Medal of Honor when one of the audience members asks him if he ever regrets that his own life has taken a less notable course. The arrival of PFC Al Melvin (Jeffrey Wright) in Marco's life, armed as Melvin is with the kind of madman's journal that Se7en made fashionable, convinces Marco to try to contact Shaw and unravel the secret of a few lost days for their patrol on the border of Kuwait. We're deep in the territory of Jacob's Ladder here (and Jacob's Ladder is a superior film in most respects, mainly thanks to its lack of contemporary politicism), but the comparison holds in their atmospheres, both pervasive with a close, consumptive dread. The idea that the accoutrements with which we decorate our accomplishments (medals, merit badges, tales of valour, and other illusions of purity and patriotism) are fraught with perceptual errors and holes in memories is a sticky one. It suggests that all the lies that constitute our lives sometimes lead to delusions of the worst kind. And it suggests that it may be futile to ever believe that we have enough information to know who's the puppet--or who's pulling the strings.

Listen to the news broadcasts and the background chatter as Marco pursues Shaw and their shared secret; Demme, making his best, most anxious film since Swimming to Cambodia, layers every shot of The Manchurian Candidate with suggestions that America in the new millennium is a paranoid nightmare. Unusually smart and palpably tense, the picture only really fails in a few of its narrative details. The role of Marco's love interest, Rosie (Kimberly Elise), is needlessly obscure (the whole last act, in fact, is so complicated that I suspect the filmmakers got lost, too), the functions of Melvin and Senator Jordan are truncated and too baldly plot-moving, and for everything that Jocelyn means to the fabric of the piece and to Shaw's character, she's too much the cipher. Nevertheless, The Manchurian Candidate is a fine document of this period in time, marking returns to relevance for Demme and Washington. Although I doubt that it'll have the longevity of Frankenheimer's piece, at least in terms of time-capsules of wounded nations, it's--shockingly--almost as fascinating. Originally published: July 30, 2004.