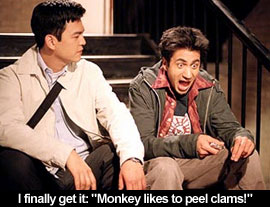 by Walter Chaw Danny Leiner's Dude, Where's My Car isn't as bad as you'd think and his Harold & Kumar Go to White Castle is probably a good deal better than you have any right to expect. It begins as any number of gross-out frat-boy comedies do, with a white guy picking on a quiet Asian dude--and then it makes the interesting decision to stay with the quiet Asian dude (Korean actor John Cho (Harold)) and his roommate, East Indian Kumar (Kal Penn), as they embark on a quest to kill marijuana munchies at the revered White Castle hamburger chain. It's about, as Harold says at one point, the feeling of a man getting what he really wants. A simple enough statement (certainly a simple enough basis for a picture--some would say too simple), but it speaks volumes of our culture that it's so unusual that Harold and Kumar are not only not merely racial shorthand caricatures, but also just young men.

Yet there's nothing heavy-handed about the politics of the piece. The picture treats race and racism like old news--it's like George Michael: we know it exists, but what's the point of dwelling? A group of Aryan extreme athlete dimwits share Harold and Kumar's endless, occasionally surreal night, aggravating convenience store owners and generally making a nuisance of themselves. They're the source, along with a pack of Neanderthal Garden State patrolmen, of the bulk of the racism within the film, and they're seen more as buffoons than as representatives of the White ruling class. Calling an Asian guy "Apu" or "Mr. Miyagi," the picture suggests, is a case of dimwits not understanding that Apu and Mr. Miyagi are already racial in-jokes, re-assimilated into a post-modern ironic self-regard. A final image of ink line drawings that recreate pidgin political cartoons from the late-nineteenth century provides one of the loudest laughs of the film. The wonder of it is that it allows every member of the audience to recognize just how quaint and unforgivable this kind of ignorance is in the twenty-first century.

Looking to score some pot, the pair makes a stop at Princeton, where a young Korean woman (Siu Ta) infatuated with Harold holds court over the school's hopelessly déclassé Far East Club. As Kumar hustles a pair of British cuties (the treatment of women in the picture is fairly appalling, it must be said, another convention begging to be submarined in some distaff version of this film), Harold wrestles with the difficulty of being a "Twinkie" (yellow on the outside, white in the middle) amongst purebloods. It's as uncomfortable and hilarious as a run-in with Kumar's all-doctor family; Harold & Kumar Go to White Castle is a farce, for sure, but it's more Marx Brothers than Three Stooges in that it irritates society's racial soft spots with mischievous fingers rather than taloned ones. The movie takes shots at some white folks for fulfilling the hillbilly stereotype while marking its yellow folks as fulfilling their own set of stereotypes--and through it all runs a subplot about Harold's crush on his beautiful neighbour (Paula Garcés) and the obsession they share for Sixteen Candles, without a word spared for Long Duck Dong.

For as broad as the comedy is and as low as its targets can be, the picture's skewed ingenuity in a fantasy scene involving a huge bag of ganja and, later, an escaped cheetah, peg Harold & Kumar Go to White Castle as something of an instant counter-cultural classic. Also worth mentioning is a cameo by Neil Patrick Harris as himself that, taken with his cameos in flicks like Starship Troopers and Undercover Brother, establishes the erstwhile Doogie Howser as having more of a shelf-life and sense of humour about himself than fellow creepily precocious child star Haley Joel Osment. I don't know if it's a revolution, but it's a step in the right direction. Funny, too. Originally published: July 30, 2004.