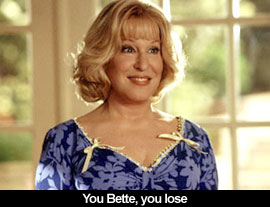 by Walter Chaw At one time Jim Henson's right hand, Frank Oz is the index finger that you close your book around when you get up to answer the door. An afterthought of a place-holder of a director, his cameo as the evidence officer in The Blues Brothers ("One prophylactic...one soiled") is as succinct a statement as any of the man's non-Muppet contributions to the films he directs. His visual style flat, his rapport with non-plush actors non-existent, Oz instinctively arranges everything as he would puppets on a soundstage: sightlines clear, movement in straight lines, and coverage that establishes the marvel of place but no sense that living things exist there. He's not a bad choice at first glance, then, for the second adaptation of Ira Levin's paranoia classic The Stepford Wives (already a mediocre camp classic 1975 movie starring Katharine Ross), the saga of a lovely young woman who discovers, Rosemary's Baby-like (another Levin source), that her husband is kind of a pig and her exclusive suburban neighbourhood is populated by vacuous femme-bots imagined as ideal wife-replacements by their pigs of husbands. Like the first film, an impossibly lovely woman is cast as the empowered lead to lend the premise a little more ironic horror, but Nicole Kidman, unlike Ross, is already an automaton and has been cast as such in films like To Die For and Eyes Wide Shut. The greatest special effect in Kidman's career is her sometime ability to simulate warmth--something that's not required in The Stepford Wives, and so again it would seem as though her involvement in this project makes a great deal of sense. Because of this, it's sort of amazing how genuinely bad are the results.

Joanna Eberhart (Kidman) is a carnivorous television executive with Crispin Glover's haircut and a scary preoccupation with enunciation who, in the opening reel, ruins the life of an unassuming Omaha man (Mike White) with one of her reality shows and finds herself fired so that her studio can avoid litigation--shades of the Jenny Jones scandal from a few years back and realization, simultaneously, that the satire of reality television is a day late and a few dollars short and utterly toothless as a consequence. (The idea that a couple would be flown to an island and surrounded by professional prostitutes has already been explored in everything from "Temptation Island" to "Survivor"; it's the Golden Rule corrupted to: "He who has the gold, makes other people monkeys for it.") With Joanna installed as the villain of the piece, the intent of the picture is immediately muddled when she and nebbish hubby Walter (Matthew Broderick, Ferris Bueller playing Cameron Frye with some regularity now) move to Stepford, CT to restart their lives. (Their children, it should be noted, are an afterthought in their marriage and the same in the film.) It's not long before Joanna makes friends with dinosaur feminist author Bobbi (Bette Midler, who has the only memorable lines in the film, both involving pine cones) and flaming queen Roger (Roger Bart), and the happy trio proceed to uncover the awful secret of their idyllic universe: that, shockingly, Faith Hill is an android bimbo.

A legendarily troubled production rumoured to still be shooting alternate endings and filler scenes as recently as a month prior to its release, The Stepford Wives shows the strain of its hurried birth in its gracelessness and confusion. It punishes men for being intimidated by castrating women who wield their power with malice, evidenced by the "turnabout is fair play" ending scarcely better a punchline than the originally-shot deus ex machina and no less simpering. The picture can't decide whether the titular replicants are robots (as suggested by one of its trailer-spoiled images of a bald plastic Kidman opening her black eyes) or just the women surgically altered and embedded with mood-altering microchips as the new conclusion demands, and it can't figure out how to end without taking a few minutes to let Kidman vamp in her curiously sexless way.  Thus it's a feminist message about men being bad tied to a post-feminist message about powerful women being neo-men (and bad), while giving the arch-villain (not Christopher Walken--who, once again, is only funny for the fact of him) a speech about the evils of blonde nymphets, hoping that no one notices that said villain's idea of paradise appears to make all women blonde nymphets.

There is no cause indicted in the eager-not-to-offend The Stepford Wives. Even Joanna's half-heartedly vilified reality-TV programs are the means by which gay hero Roger recognizes and admires Joanna. It's that matter/anti-matter quandary of a politically correct satire in which a homosexual man is first equated as just as silly as the domestic Stepford goddesses and then "turned" by conversion into a bow-tie-wearing member of the Grand Old Party. It hates its gays and it hates its conservatives (since it's another DreamWorks misfire, it makes sure to mention that it hates Disney most of all), hates its men and hates its women, and in the end it wants to forgive it all in a scene that lays the blame on the doorstep of Martha Stewart and the desire for a better world where everyone is created equally vapid. The sole irony of the film is that it's a Stepford Wife itself: scrubbed clean of controversy, stupid and servile, and only really ugly for the details and rationale behind its creation and the fact of its existence. Expectations for it already low, The Stepford Wives digs deep and surprises with its ineptitude anyhow, dooming it to the fate that the studio's equally underwhelming Shrek 2 deserved. Originally published: June 11, 2004.