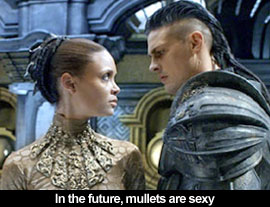 by Walter Chaw David Twohy constructs films from ideas and images borrowed from the well of archetype--Shakespeare ("Julius Caesar" and "Macbeth" in particular), Greek theatre and mythology, Joseph Campbell by way of George Lucas and Steven Spielberg--and he sometimes does so at the expense of transitional scenes or traditional narrative sense. There's a gestalt to his work, if not much linearity, sparing no time for niceties like how a character arms himself, or how such nifty details as the hero's ability to navigate like a biological sextant comes into play, but in the case of Twohy and, in particular, The Chronicles of Riddick, the gestalt is enough. The picture is a survey of George Lucas's original Star Wars trilogy, of all four Alien films, of dashes of Jeunet and Caro's French phantasms, and of David Lynch's Dune, with--and I mean this in a good way--just a smidge of Flash Gordon factored in: a parade of black leather-clad grotesqueries inhabit a lushly imagined future (breaking records for lumber usage in its Vancouver construction) in a film that attempts to tell old stories in a new way and, for the most part, succeeds with an agreeable level of whiz-bang. Occasionally it succeeds brilliantly, as in a late shot of its anti-hero Riddick (Vin Diesel) slumped on a Giger throne before throngs of rubber jack-suited storm troopers, which stimulates not just for the audacity of its scale, but also for the comparisons it summons to the "Orestiea" and "Titus Andronicus."

Five years have passed since the end of Pitch Black (this film's predecessor), and outlaw Riddick is being hunted down by a universe of mercenaries, Han Solo-like. Seeking to resolve his bounty, Riddick travels to the source of it on a planet called Helion Prime, confronting there an air elemental (Judi Dench) and an Imam (Keith David, reprising his Pitch Black role) who hold out hope that Riddick, the last of a species of muscle-bound übermenschen, can save them from a Borg-like scourge of religious fanatics led by the sixth Lord Marshal (Colm Feore) on an annihilating quest to find "The Underverse." The names of the characters and planets (Crematoria, Vaaco) are charmingly cheesy, but what impresses are the ideas that fuel the special effects: a "carbonite" chamber where a quintet of empaths dissect Riddick's memory; a planet that has a daytime temperature of over seven-hundred degrees; an image of an ephemeral creature chained by an organic-ugly chain; and, best yet, a mutation of flesh that functions as a mad permutation of a bloodhound, Cory McAbee's Bodysuit character from The American Astronaut, and a fishbowl.

Using snippets that sound a lot like György Ligeti's Requiem, Atmospheres, Lux Aeterna, Twohy demonstrates a knowledge and reverence of genre that makes The Chronicles of Riddick play like a fabulously outfitted boy's adventure serial. It trades in attitudes of virility and villainy--a moment where Riddick is sentenced to "mind regression" inspires not ironic titters so much as awestruck, deliciously childish apprehension. At the core of it, however, there's a theme about orphans coming of emotional age and the importance of the relationship between fathers and their daughters. For as sprawling and borderline incoherent as some of the picture is, there is, because of this (and owing to Twohy's honouring of the hero's journey), never the sense that the film is about to leap off the rails. It's the slavish devotion to deep immersion (Linus Roach as a reluctant "Purifier" almost steals the show in a small speech recalling Rutger Hauer's at the end of Blade Runner) draped over a sometimes-familiar frame that makes of The Chronicles of Riddick a superlative entertainment.

Like Pitch Black, it's a genre exercise that reminds us that genre films have been unfairly relegated to the cultural ghetto--a smart, funny, and exciting piece that, while certainly flawed (the last film to cant the camera this much was Battlefield Earth), doesn't once condescend to be ordinary. The film elicits the kind of chills I used to regularly get as I sat rapt before big-budget science-fiction spectacles, long before I realized they were mostly out to separate me from my wallet. The Chronicles of Riddick's shortcomings all seem a result of mad ambition: it's incalculably refreshing to see a picture that works this hard to exceed expectation. That it accomplishes this more often than not is reason to get excited. Originally published: June 11, 2004.