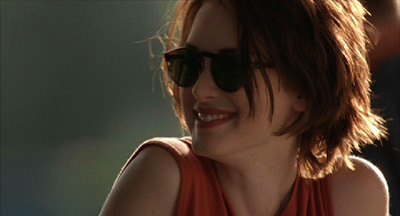 by Bill Chambers If Some Kind of Wonderful is just an inverted Pretty in Pink, then Reality Bites is Some Kind of Wonderful inverted back again, with a proud young woman positioned at the apex of a love triangle and flanked by suitors from opposite poles of class who share a sincere affection for their mutual inamorata. More than conceivable that screenwriter Helen Childress was influenced by these John Hughes productions (whether or not she consciously chose to emulate them), it's probable: Childress was of breakfast-club age when they were released, and as any child of the '80s will tell you, they were too reverent of teenage travails to inspire much in the way of hipster backlash. (While some have speculated that Ferris Bueller is Hughes through the looking glass, the speech from that eponymous film in which a secretary canonizes Ferris--"The sportos, the motorheads, geeks, sluts, bloods, waistoids, dweebies, dickheads...they all adore him: they think he's a righteous dude"--suggests that Ferris is nothing less than the personification of Hughes's cottage industry.) What's interesting is that Reality Bites' loyalty to a proven formula only traps it in the same adolescent mindset it purports to preach against ("grow up" is a major refrain): If it were about the consequences of our heroine's choice of mate instead of about the choice itself once more, it might've satisfied Hughes's maturing constituency on a deeper level.

After graduating as valedictorian of her film school, Laney (a luscious Winona Ryder) gets a job assisting unctuous morning-show host Grant Gubler (John Mahoney) but moonlights as an amateur documentarian, compulsively videotaping the goings-on of roommates Vickie (Janeane Garofalo) and Troy (Ethan Hawke) and gay fourth-wheel Sammy (Steve Zahn, a dead ringer in character for "Party of Five"'s Mitchell Anderson). Troy, a neo-beatnik, and Laney, fashionably activist (she refuses to order from Domino's because they support Operation Rescue), live a lie of friendship that's given a shot of sodium pentothal by Laney's car-crash meet-cute with Michael (Ben Stiller, also this film's director), an executive for the MTV clone "In Your Face." On collegiate turf, doltish Michael would be no competition for Laney's feelings against the quick-witted Troy, whose aloofness is easily romanticized, but in the "real world" (ever too bounce-lit by cinematographer Emmanuel Lubezki to seem a shock to the system), Michael's stable career and emotional availability even the score.

Universal is pretending that Reality Bites matters by commemorating its tenth birthday on DVD, although synergy also factors into things, what with the disc's release falling in the same month as the theatrical bow of Dodgeball and Along Came Polly's DVD premiere. (Stiller dominates all three pictures.) But reviving the film is not a bad idea from a sociohistorical perspective: Humbled by the previous decade's grotesque materialism, Nineties filmmakers generally felt like they were living down the Eighties and made a concerted effort to protect their product from dating itself*, but Reality Bites, with its Hughesian affectations, at least strives to be seminal--only Cameron Crowe's Singles, the Brady Bunch movies (which star Stiller's future wife, Christine Taylor), and the excrescent Empire Records so unabashedly embrace their pre-Internet moment. (The French title for Reality Bites translates as '90s Generation.) And who better to provide currency than Stiller, whose acute perception of popular culture imposed a "best before" date on large portions of "The Ben Stiller Show"--the earliest incarnation of which happened to air on MTV, thus shedding light on the idiosyncratic feel of scenes depicting Michael in the workplace.

Stiller's cancelled sketch shows betray a mastery of aesthetic parody, so it's no surprise that the best parts of Reality Bites tend to zero in on a target, usually some facet of MTV programming; the closing credits of the film are interrupted by a burlesque of the typical Troy-Laney interaction that divines, with formidable accuracy, the network's fate as the Squaresville home of ostensibly trendsetting fare like "My Guide to Becoming a Rock Star" and a deplorable modernization of Wuthering Heights. As all the great satirists are seers, one could say it's with this skit that Stiller became something more caustic than a caricature artist, and certainly this is borne out by his next two films as director, The Cable Guy and Zoolander, both of which bit the hand that was to feed them by regarding anyone weaned on the glass teat with contempt. Reality Bites' lampoonery is relatively merciful--and yet, Stiller's pronounced evolution into a more subversive social commentator retroactively undermines the film's drama. When U2's "All I Want Is You," the most emotionally pornographic '80s song The Smiths didn't record, crops up married to a montage in which Laney decides to literally and figuratively pursue her true love, the verklempt will ask: Did Stiller arrive at this prefabrication organically (the race to catch a loved one is almost a genre imperative), or is he mocking me?

THE DVD
As intensely likable as Reality Bites is (the impromptu dance to "My Sharona" in a mini-mart is irresistably daffy), within the DVD's section of seven deleted scenes (the commentary track and featurette indicate additional omissions still in the vault) lurks a richer, if darker, movie with less of a studio glaze. According to video intros courtesy of Stiller and Childress, pacing led to the unceremonious removal of a charming dialogue between Laney and Troy meant to take place on either the night of their graduation ceremony or shortly thereafter, while Michael receives a touching send-off in a sequence apparently cut due to sound problems, though it's plausible that Michael simply had the misfortune of being played by the self-deprecating Stiller, as suggested by the humiliating resolution to Michael's story arc in the final cut. I agree with the decision to lift a pair of sequences concerning Laney's alcoholic sister, brilliantly essayed by Childress's sister Patricia though she may be: the uncompromising (or "heavy-handed," to borrow Stiller's assessment) nature of this rehab-set subplot clashes with the film's poppy façade. The final three elisions are minor in length but crucial in function as they solve the sudden appearance of a Gap uniform on Laney and therefore complete her transition into a responsible adult. (She's too narcissistic to accept a McJob in the finished film.) I suppose we shouldn't mistake Stiller's wistful second-guessing of his editorial decisions for remorse, but cleaning them up (they look like they were derived from a VHS dub of the workprint) and reintegrating them into Reality Bites via seamless branching is a missed opportunity that had the potential to boost the film's reputation.

The disc's supplementary material continues to nourish with the homespun "Reality Bites: Retrospective" (30 mins.), featuring Stiller, Childress, producers Stacy Sher and Michael Shamberg, Zahn, Hawke (gaunt now), Garofalo (blonde now), and Ryder (orange now). Directed by Alan Griswold, it coasts on the candour of its interviewees, from Garofalo's breach-of-protocol outing of the other actresses up for the role of Vickie (Parker Posey, Anne Heche, Gwyneth Paltrow) to Hawke's admission that his career was in the toilet circa Reality Bites. We learn that Shamberg initiated the project with the goal of siring the next Big Chill--which, as far as confessions go, isn't as outrageous as the one Stiller makes in his film-length yakker with Childress that he encouraged a liberal amount of cribbing from Warren Beatty's Reds during the fine-tuning of the screenplay. Blessed with excellent memories, Stiller and Childress--present for every day of principal photography at Stiller's behest (and sometimes her chagrin)--recall the shoot in vivid detail, whether it be the order in which scenes were filmed or the mood of the set on a particular day. Childress tests our patience by overstating the Bohemianism of Reality Bites ("I can't believe it's a studio film!"), but her palpable chemistry with Stiller yields a highly listenable yak-track.

"Lisa Loeb: Stay" (6 mins.) separately interviews Hawke and singer Lisa Loeb (glamorous now) about the latter's soundtrack ditty "Stay (I Missed You)." Loeb covers a lot of ground in a short space, such as the song's autobiographical roots, her initial discomfort with appearing in "Stay"'s iconic, Hawke-helmed video (also on board) sans guitar, and her desire to appease fans by always performing it live. (Hawke has comparatively little to offer.) Though the disc recycles the supple 1.85:1 anamorphic widescreen transfer and Dolby Digital 5.1 mix of the film's previous DVD release, improvements in encoding procedures since 1998 render this new presentation definitive. Because Reality Bites played digitally-equipped moviehouses exclusively in DTS, the absence of DTS audio is something of a disappointment, but the DD alternative is unexpectedly dynamic--Michael's airbag goes off with the force of a cannon blast. Forced commercials for Field of Dreams, Along Came Polly, Eurotrip, and the Reality Bites 10th Anniversary soundtrack CD, the trailer for Reality Bites, and a reel advertising "Cool 80's (sic) Shows" (i.e. "The A Team", "Knight Rider", "Magnum P.I", and "Quantum Leap") now available on DVD round out the platter. Originally published: June 7, 2004.

This probably explains why so many of the best American films of the Nineties are either period pieces (Goodfellas, The Ice Storm) or purposefully timeless (Edward Scissorhands, Se7en), because there was no identity to deny. return