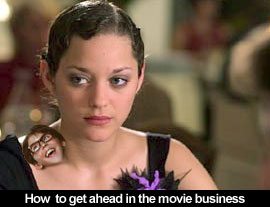 by Walter Chaw Former animator Yann Samuell's Love Me If You Dare (Jeux d'enfants) is painfully, dedicatedly unwatchable. It's vile and perverse in a puerile way that bears no discernable fruit. For a romantic comedy, it's conspicuously lacking in romance and comedy, and for a dark, satirical look at the Hobbesian baseness of human love and nature, it's astonishingly childish. The picture is the equivalent of a little boy eating a worm to impress the little girl he has a crush on: a tireless series of schoolyard transgressions portrayed in the whip-pan jack-in-the-box way of Jean-Pierre Jeunet's Amélie that shares with that film a strong thread of misanthropic mischief, but reveals itself the classless poseur in its constant keening for attention. Love Me If You Dare is so awful that its constant "hip" references to George Lucas films not only somehow make Kevin Smith seem current again, but also suggest of all things a rom-com directed by the clown-prince of Skywalker Ranch himself. There's an idea gnawing in my head that the reason this picture was so popular in France has something to do with a failure to translate the satirical dimensions of a film that succeeds so spectacularly in alienating its audience, yet, like Roberto Benigni's Pinocchio (the Italian version of which Jonathan Rosenbaum proclaimed one of the best films of 2002), whatever's happened in transit has handily transformed any rewarding subtext into a rising din.

Eight-year-old Julien (Thibault Verhaeghe) receives a metal can from his cancer-ridden mother (Emmanuelle Grönvold) and uses it to engage eight-year-old Sophie (Joséphine Lebas-Joly) in a game of "dares," the successful completion of each obnoxious challenge (piss on the rug in the principal's office, I dare you) results in the transfer of the tin grail. Their lives are otherwise miserable, what with Julien the child of a whimsically abusive, non-communicative father (Gérard Watkins) and a soon-to-be-dead mother and Sophie being Polish and all, and their little game becomes all-consuming and, ultimately, fatal. The two children play doctor, sleep in the same bed together, then ten years pass in one edit and Julien (Guillaume Canet) and Sophie (Marion Cotillard), still in that same bed, presumably never having consummated their creepy love affair, suddenly have it dawn on them that after sailing oceans on their exclusive ship of fools, they were meant for each other.

I remember an article in THE ONION about a man arrested for exhibiting romantic comedy behaviours, and to an extent Love Me If You Dare ("Child's Play" is its French title and more apt for more than one reason) can be read as tongue-in-cheek excoriation of the Meg Ryan/Julia Roberts school of sanctifying bad behaviour. But there's a point for me at which a film trying to comment on a malady by embodying that malady becomes, simply, the malady itself. Does Pier Paolo Pasolini's Salo comment on human cruelty or stand as an example of human cruelty? Is Nacho Cerdá's Aftermath about exploitation, or is it exploitation? How you answer questions like that has a lot to do with how much you laugh knowingly at or with Love Me If You Dare--or how much you recognize the difference between Pasolini's dangerous art and Samuell's facile pornography.

Less ambitious and therefore not nearly so hateful in its failure is Argentine director Alejandro Agresti's saccharine Valentín, which provides another take on that never-stale conceit of a delightfully precious, melon-headed little boy reminding the world's Jerry Maguires that the grass is greener on every side. Another picture that sort of reminds of Amélie while comparing unfavourably to The 400 Blows, the piece bears no surface unpleasantness, making the titular tyke's (Rodrigo Noya, in a surprisingly graceful performance) solo ventures around the streets of Buenos Aires cause for jaunty infant Montmarte travelogue. Best read as a point-of-view fantasy projected through the child's abnormally large, horn-rimmed rose-tinted glasses, his fascination with breaking earthly bounds, expressed through the matchmaking establishment of them, speaks eloquently (and familiarly) to the way that a lonely intellectual tries to touch the face of the sublime. Unfortunately, as Valentín unfolds its perfunctory milestones at its carefully inoffensive clip, it begins to take on the lulling cadence of a twice-told tale, and Noya's wise blood starts to curdle in the cradle.

When taken with The Return (boys needing their fathers), The Chronicles of Riddick, last year's Whale Rider (girls needing their fathers), and Harry Potter and the Prisoner of Azkaban (boys needing their parents), Love Me If You Dare and Valentín (both about boys needing their mothers) seem a parallel thematic emergence that redresses at least in part a concurrent rise in the number of horror films with inexplicably evil bad seed antagonists. It's the new paranoid generation gap described not in terms of possible reconciliation but finger-pointing at the wicked spawn on the one side and the ineffectual progenitors on the other. What a nihilistic picture like Love Me If You Dare and an ostensibly hopeful one like Valentín serve to do best is highlight a contextual thesis. Neither comes recommended, but each may ultimately prove essential in a conversation about this period in national and world cinema--a line constantly tilting between the importance of talking about something like Man on Fire and actually having to sit through it. Originally published: June 11, 2004.