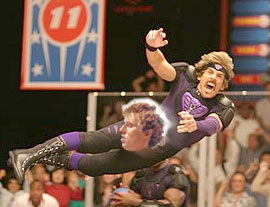 by Walter Chaw Maybe the only thing American Splendor really got right was the importance of the first Revenge of the Nerds as buoy (along with Martha Coolidge's Real Genius of the following year), marking that unquenchable spark of hope nurtured by the freakishly unapologetic intellectuals nestled in there among the Reagan-era "über-normals." Curious that the idea of "blessed are the meek" and "blessed are the merciful" in Christ's Beatitudes are so often subsumed by the scolding Old Testament Commandments (Moses, anyway, as Kurt Vonnegut Jr. points out) in right-wing platforms and Southern courthouses. Curious enough so that the premise of Revenge of the Nerds washes out as a contest between the liberals on the one side (smart, well-read, poor, black, gay, horny--recalling that the nerds of the film are "adopted" by a black fraternity)--and the conservatives on the other (white, privileged, stupid, shallow, religious), while the premise of Real Genius is that same liberal pool arrayed against that same conservative pool but summarized by our military-industrial complex--curious because in both films, the liberals are clearly the meek and the merciful while the white-collar conservatives are the manifest oppressors. I always wanted to think of Christ as a studied socialist hippie: at the least, His Barry Gibb look in the Western canon would finally make sense.

If there is poignancy in the timing of a film's release and, more importantly, in the timing of a group of like-minded films' releases (that appear driven by parallel developments rather than products of the sequel or knock-off instinct), then it bears examining, as President George W.'s administration has proven itself fond of late, the similarities between Bush Jr.'s and President Reagan's administrations, particularly as there are a great deal of similarities between certain chunks of films released during their respective terms in office. For each Revenge of the Nerds or Real Genius or Risky Business there is now a School of Rock and Envy and The Girl Next Door: the rise of the nerd class, the deplorable brainiacs who screw up the grading curve, do their homework, and don't pretend to be facile and brutal and WASPy to fit into an image of comfortable national conformity. Our constant squabbling about a child's right not to believe in a nation under God or Bush Jr.'s answer to Reagan's "City on the hill" refrain--"See, a C student can do pretty well for himself"--speak to that rage for brutishness and anti-intellectualism. Of all the things wrong with Al Gore, the unforgivable sin was that he knew things and he was completely humourless about it--to Gore, things like knowledge and aptitude weren't merely unfunny, they were also something of which to be proud. A big problem was his boastfulness and stiffness; a bigger problem was that he made people feel inferior for what he knew. And the biggest problem is that so many Americans don't want a leader who is, perish the thought, superior to them intellectually--who can say two sentences that make sense together, and have read books that we haven't. Who have, let's face it, read some books.

So add to the pool of George Jr.'s term's cinematic legacy the subversively funny and smart Dodgeball and the subversively dim-witted and populist Napoleon Dynamite: the one dissecting our institutions of media, cult of beauty, and veneration of professional sports, the other trafficking in them to massage a few angry yuks at the expense of its misfit gallery. Both ostensible underdog uplift comedies in the spirit of Nerds/Genius (indeed, characters break down along nerdsploitation lines, with Dodgeball going so far as to gift original Nerd Curtis "Booger" Armstrong a cameo), each deals with the idea that race and sexual leaning, just by the fact of them, relegates folks firmly into the outcast caste. Dodgeball satirizes the schism in our society between the meek and the monstrous and Napoleon Dynamite unspools like Gummo if Harmony Korine had played it strictly for laughs. Just because Napoleon Dynamite is considerably funnier than the execrable Saved! doesn't make it any easier to forgive for its portrayal of the left side of the aisle as a shambling crew of misfits trundling along behind their Marxist circus carts.

In Dodgeball, Peter La Fleur (Vince Vaughn) doesn't pay taxes, doesn't pay his bills, and has a car that has to be pushed to his "Average Joe" gymnasium. Because he doesn't care very much about collecting his members' dues, the bank has foreclosed on him and he's in danger of being bought out by Tony Little-esque fitness napoleon White Goodman (Ben Stiller). Le Fleur is a flower, and White Goodman has a name like a Nazi pilgrim. Like Saved!, Dodgeball boasts a wheelchair-bound character (there played by Macaulay Culkin), but unlike Saved!, the wheelchair-bound character in Dodgeball (Patches O'Houlihan (Rip Torn)) is aggressive, virile ("I have hookers in my room, my treat"), and not the slightest bit like the rubber effigy that ate Culkin. Former dodgeball champion Patches volunteers to coach the Average Joes (among them a black homosexual, a girl who likes unicorns as much as Napoleon Dynamite likes Pegasus, and various nerd archetypes) in the tournament contrivance that will win them enough money to avoid being bought out by Goodman.

Best in the sketch format, Ben Stiller is as good as he has been in years as the messianic, pathetic Goodman, who's addicted enough to food that he zaps himself with a car battery whenever his thoughts stray to donuts and is eventually discovered masturbating with a slice of pizza. Such is a literalization of the love/hate relationship the United States has with its lunch (read Michelle Stacey's fabulous Consumed: Why Americans Love, Hate, and Fear Food), delivered here with an extraordinary amount of verve and concision. Goodman's chain of fitness facilities features a central big-screen through which an image of Goodman appears to interact with his patrons, spurring them to physical exhaustion while ordering his minions to tamper with the scales in the women's locker room--the best image of the efficacy of Orwellian groupthink and intimidation since the underestimated Gattaca. When he and a group of rubber-suited, surgically and drug- (and radiation-) mutated thugs decides to enter the same dodgeball contest as the Average Joes, the picture evolves into a sharp satire of the hyperbole and hypocrisy of our beloved professional sports culture.

Lost in the furor over the revealing of Janet Jackson's sad breast at the Super Bowl halftime show is the memory of the gyrations of the cheerleaders, the sexual content of the commercials, and the substance of all the performances that came before the Tit. There is a disconnect in American culture between implication and what is implied--the eye can be drawn fetchingly toward the breasts and the buttocks in any number of beer commercials suggesting that women like to be fucked by dogs and bears (why does a Coors commercial refer to the length of a matchmaking dog's tail? Nine inches), but there is somehow nothing more threatening to the piously sanctimonious than an actual breast or buttock. But there is no separation between flesh and contest no matter the amount of war euphemisms attempting to obscure the homoeroticism of angry touch, and so Dodgeball has Goodman's office decorated with a pair of cast-iron Greco-Roman wrestlers before decking out its heroes in S&M gear due to a uniform mix-up. ("Good toss by that submissive," emerges as a classic throw-away quotable--as do most of announcer Gary Cole's references to Lewis Carroll and Sappho.) A late cameo by Lance Armstrong is as brilliant as an early cameo by David Hasselhoff, and the match nationalism of the picture reminds of The Saddest Music in the World, if only Guy Maddin had a sense of humour about himself. Dodgeball is a barometer of the United States circa 2004: provincial, deluded, mired in a time where a ballistic defense system seems like a better idea than disarmament and "optimism" has become the only politics that matter. It's wise enough about itself and the world that a late treasure chest full of happiness is labelled "deus ex machina," and it manages to stay silly enough in its crotch-shot theatrics to be hilarious without--save one unfortunate gag about a fat cheerleader--contradicting the intelligence that drives its satire with a steady, sure hand.

On the other end of the spectrum is Napoleon Dynamite, the Sundance-approved debut of Jared Hess (just as Dodgeball is the feature-length debut of commercial director Rawson Marshall Thurber), which finds endless glee in beating the holy hell out of the demented denizens of Preston, Idaho. Chief victim is the singularly unpleasant Napoleon Dynamite (Jon Heder), a carrot-topped, buck-toothed moron living with his chatroom-addicted brother Kip (Aaron Ruell) and, after an ATV accident lays their grandmother low, his lost-in-time Uncle Rico (Jon Gries). It's a series of vignettes strung together by nothing until a late contrivance of school pageant nerd make-good tries to send its audience to the parking lot feeling as though they're in Napoleon's corner instead of the film-long jock position of laughing at just how much of a dweeb this guy is.

I wondered for a long time why it was that the jock and cheerleader characters weren't developed at all to provide a foil for the capering contortions of Napoleon, his best friend Pedro (Efren Ramirez), Kip, Uncle Rico, and eventual love interest Deb (oh look, Tina Majorino's still alive) before I realized that the bullies were us. A scene in which Napoleon is shoved--hard--against a locker, accompanied by the sound of flies buzzing (Hess's favourite commentary on his characters), happens as he stares vacantly through the fourth wall--the effect of said action being that we've essentially been put in the position of the pusher, so that the humour we derive from that action is the same as the titillation we derive from Norman Bates's peeping before murdering Marion Crane. I'm not saying I didn't laugh, I'm saying that I'm the asshole in the letter jacket for laughing. It's funny in the same way as beating that creepy D&D kid in the moon boots is funny, rendering comparisons to Todd Solondz's incisive teen comedies unfair and wide of the mark. I don't even have the energy to rail against the ways that blacks and Hispanics are parsed in the picture as, respectively, soul-infusion and intimidation. The best line in Napoleon Dynamite is the come-on ("I caught you a delicious bass"), and it's met with a chorus of jeering approval, mine included, while the best lines in Dodgeball ("Let the schadenfreude commence!") are met with general silence, save the braying, honking laughter of a heretofore silent minority massing to overthrow the small-minded dean and the oppressor Alphas.