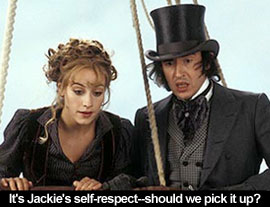 by Walter Chaw I've spent all the bile and disappointment I'm going to spend on Jackie Chan and what's become of possibly the biggest star on the planet since his relocation to Hollywood. The rumour that this iteration of Jules Verne's Around the World in 80 Days is to be Chan's American swan song fuels the suspicion that even folks unfamiliar with the stuff that once earned Chan comparisons to Buster Keaton have begun to wish, like any majority culture member towards any outcast in any community, that they would stop taking the abuse and just go home. There must be a breaking point for Centurion scourers when pity (revulsion?) overtakes zeal for punishment, and the lengths to which Chan has voluntarily subjugated himself in the role of sidekick, comic relief, and yellow Stepin Fetchit have progressed beyond paternalistic bemusement into the raw area of salt into an open wound. The old Jackie Chan would have done this film and taken the role of Phileas Fogg--new Jackie Chan is content to be Kato. (Burt Kwouk's, not Bruce Lee's.) I was one of three Asians in a large high school in the middle of one of the whitest, most conservative states in the Union, where Chan bootlegs provided by one of South Federal's Vietnamese groceries were among my few lifelines to a positive Chinese media role model amidst all the Long Duck Dongs, Short Rounds, and Ancient Chinese Secret launderers. For me now to feel more apathy than outrage at Chan selling out--dancing, singing, and acting the fool for the charity of the dominant culture--represents a death of a lot of things essential about me. It happens this way: the tide of ignorance wins out not with a bang but with a whimper.

Fogg (Steve Coogan) is a Victorian-era inventor who makes a wager with the Snidely Whiplash head of the Royal Academy of Science Lord Kelvin (Jim Broadbent) that he can accomplish the titular feat. With loyal valet (which is apparently the term for "Asian Pickaninny") Passport 2 (Chan) and French tart Monique (Cécile De France) at his side, Fogg proceeds to use Passport 2 as a crash test dummy and rickshaw driver. Described as "honourable," he's given to saying things like "thousand pardon"--he's Brain to Fogg's Inspector Gadget: a loyal dog with a secret life. A dog who has to look away coy with a wink and a nudge when the Brit and his French girlfriend, for God's sake, smooch; Jackie Chan, the reaction shot--you got any shirts need pressing? Along the way they meet Turkish Prince Hapi (Arnold Schwarzenegger), who was apparently the model for Rodin's "The Thinker" (I didn't know Rodin had a sense of humour), and various other fading luminaries in cameos of degrees of sad inexplicability (Rob Schneider, Sammo Hung, John Cleese, Macy Gray, Owen and Luke Wilson, Richard Branson). Oh yeah, Kathy Bates plays Queen Victoria.

With charges of racism complicated by Chan's own complicity in this mess (he's listed as a producer), looking at Around the World in 80 Days as just an inept film free of interest for all but the extremely young and the mentally impaired inspires almost as lengthy, if not as fruitful, a discussion. Just the disturbing violence of the piece, something forgiven by most as "cartoonish" or, even stranger, "just for children," should give pause, especially considering that an entire set-piece is centered around an old woman believing herself to have been robbed before falling, heavily, off a wall and onto her face. Ewen Bremner as a hapless Scotland Yard bobby on the heroes' trail receives the bulk of the frightening abuse, however, suffering crotch shots, falls from trains and buildings, and any number of appalling injuries in the name of comic relief. There's a marked difference between "The Three Stooges"-type abuse and this picture's bizarre affection for first doing harm. It almost goes without saying that the picture is never funny on purpose.

Around the World in 80 Days plays like a suicide note, full of references to past glories (Hung appears as Wong Fei Hung, the folk hero Chan played in Drunken Master II), past fight scenes played at half-speed, and an implacable patina of an obliterating self-pity. Chan's hopeful "I can also sing" is a variety of servile that should set teeth on edge, while a whole sequence set in India in which colonialist Britons "hut hut" around while a train-car of Indian waifs offer Hindu homilies about the nature of legend and the preciousness of malapropisms is genuinely disturbing. "Enough of your ridiculous stories, Passport 2!" commands Fogg, and the obedient valet offers up his apologies. After Monique wonders if there is anywhere in the world not controlled by the British, Passport 2 offers up his sole defiant riposte, "Not China, not yet"--right, the British only incited a pair of Opium Wars in the 19th century, engineering the Taiping Rebellion along the way that claimed somewhere in the neighbourhood of 100 million Chinese lives. Facts that don't really matter all that much in the context of the film, of course, but they do serve to propel Chan's hollow chest-pounding square into the lip-service spotlight. He's not wrong for saying it, but his pride has no place outside of exactly the kind of populist, condescending flimflammery of this kind of self-congratulatory Disneyfied horseshit, as clear a headwater and bellows as any for the kind of condescending, marginalized invisibility of Asians in American cinema. So long as the most powerful among us is content to be a clown (Richard Pryor bought for a rich white kid's fun in The Toy), there's only so much wriggle-room the rest of us have for our outrage. Originally published: June 16, 2004.