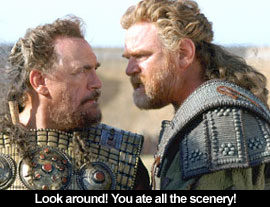 In digest, Greek king Agamemnon (Brian Cox) goes to war when his brother Menelaus's (Brendan Gleeson) wife Helen (Diane Kruger) runs away with Paris (Orlando Bloom), the young prince of Troy. Hidden behind an impregnable wall, Trojan king Priam (Peter O'Toole) is consumed by his blinkered religiosity, while Paris's older brother Hector (Eric Bana) resignedly prepares to defend his city and his brother's folly. Meantime, an all-star cast of Greek heroes led by Achilles, mighty Ajax (Tyler Mane), and crafty Odysseus (Sean Bean) lay siege to the city--for ten years in the poem, for a couple of days in Troy.

Fruitless to quibble with the ways the film departs from the source text (given that the Homeric epics are themselves based on centuries of songs and folklore--there probably weren't a thousand ships in all the ancient world), what irritates more is how listlessly and repetitively the story of Troy itself plays out. Cox, O'Toole, and Gleeson chew scenery (O'Toole coming off the best, Cox the worst); Bloom and Kruger are completely outmatched as Bloom reprises both his bland paramour in love from Pirates of the Caribbean and his archer-elf Legolas and Kruger does her best not to collapse from inertia; and Bana and Bean do the absolute most with a troubling minimum. The action meanders between what seems dozens of solemn funeral pyres and dozens more large-scale CGI-boosted action sequences that seem primarily interested in demonstrating scale rather than elucidating individual storylines. By the third time an endless wall of extras and computer-generated doppelgängers clash against one another after massing ominously on a hill, even the greenest audience member (one unschooled in Peter Jackson's The Lord of the Rings trilogy) will have grown tired of the hollow spectacle. Modern movie magic can make armies of tens of thousands clash, but it can't yet fabricate a human performance, a subtle screenplay, or a reason to care.

Troy is cast in bronze even as every other line of dialogue goes about trying to fit its characters for their marble statues. A lethal drinking game could be crafted from the number of times the script solemnly refers to immortality, just as it could for the number of times that Pitt strikes a body-builder's pose as Horner's pornographic horns adore him. Points are owed for a battle between Achilles and Hector--the only duel in the picture not obscured by Petersen's inability to shoot coherent action--for O'Toole's plaintive plea for his son's body, and for the sense that while the piece lacks import and weight, it does try to address themes like loyalty and honour with a refreshing lack of snarky post-modernism. Troy is bad, in other words, but it's not awful. The fact remains that were Pitt a more charismatic lead, its sin of insignificance would probably have been redressed to some degree. Originally published: May 14, 2004.