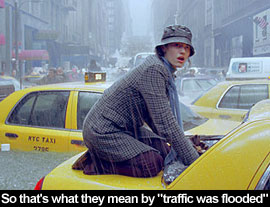 Reading The Day After Tomorrow as a 9/11 film, in fact, adds another level of polemical discussion in that the film's Vice President Becker (Dick Cheney ringer Kenneth Welsh) emerges as the "I don't believe you" villain endemic to disaster movies and, in this way, at least partly responsible for the number of casualties suffered on behalf of his myopia. Indulging in the fantasy of starting over with a clean slate using science equal parts ridiculous and schmaltzy, the destruction is fun to watch in the way that apocalyptic films always are, the only fantasy element that stretches the bounds of credulity when née-Cheney takes responsibility for his bad decisions and apologizes to the nation. (I'll buy the world turning into an ice cube in five days, but come on, Hell would take a lot longer to freeze over.) Clearly my politics would suggest that taking pot shots at Cheney and Bush is only natural, but my politics aside, the film just can't justify its politicking, particularly when the rest of the dialogue is some variation of "Oh, my god," and, "I've never seen anything like it." It's no wonder the military is sort of horrified that they tacitly endorsed this film with a loan of their Hueys, or that our beloved administration instructed NASA scientists not to comment on the science of the piece--but it's also hard to believe that anyone with a mind will have theirs changed by something this reductive.

Dr. Jack Hall (Dennis Quaid) is a paleo-meteorologist or something who studies ancient weather patterns and has a little theory about the squalls that decimate Beverly Hills in the picture's exuberantly lawless opening. An absentee father, he uses the destruction of the world as the means to make a connection with estranged son Sam (Jake Gyllenhaal). Jack's wife is Dr. Lucy Hall (Sela Ward), a character so insubstantial that she's shucked off to the film's most offensive subplot (she's the ward of a cancer-ridden child, a device that is always exploitive if it's not the centre of the film) while her marital status remains a mystery. We assume that she and Jack are divorced because of the poignancy ascribed to a late profession of love, but The Day After Tomorrow isn't interested in wives and mothers when, throughout (but especially in the film's latter half), it's pathologically interested in fathers and sons. Nobody listens to Jack until it's too late, and then Jack takes off to Manhattan to rescue his boy, armed only with snowshoes and a manufactured sense of urgency--why does he have to hurry and, once he gets there, what does anyone believe that he can do? To the picture's credit, though it fails to conjure any tension for its final third, so long as the mayhem is unfolding, The Day After Tomorrow is really an amusing little spectacle.

So while it's clearly not worried about the millions of people killed by our conspicuous consumption of fossil fuels (the last line of the film is a sickening, "Man, have you ever seen the air so clear?"), I'd offer that this genocidal neglect is as superficial as its daddy dearest obsession--that filial chasms (note how an ice fissure opening figures as the film's key image) are the same sort of relational shorthand as cancer-ridden children and noble sacrifices: they're the character development equivalent of blowing something up real good. When you get past the melodramatic shell of the piece, the film is actually manufacturing a shallow screed from a German director who has power of final approval over every aspect of his projects in a conspicuous case of the tail wagging the dog. Take into account that the best, if also most obvious, moment of the film is when the unnamed President stumbles into the Oval Office and asks what's happening before asking his vice president, in a panic, what he should do. I mean, for all the lip service the picture plays to a more liberal worldview, what with its woman doctors, massaging of the nobility of the "Third World," and punishing jerks with fifteen-hundred dollar raincoats, there's a disturbing moment where, preparing to run from a tidal wave, the main white hero Sam grabs his white love interest (Emmy Rossum), the white hero's romantic subplot's white rival grabs a black peer, and the black homeless comic relief grabs his dog. It's the pecking order of the every-movie world order, and no amount of tectonic calamity conjured in The Day After Tomorrow's yawning mainframes can overcome its base instinct to pander to the easiest conventions of the conservative big-budget cash-grab sensibility. Originally published: May 28, 2004.