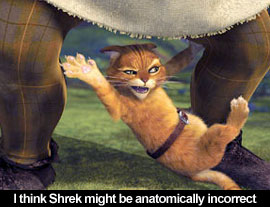 by Walter Chaw Neither better nor worse than its predecessor, think of Shrek 2 as a step sideways--it doesn't so much earn an audience as inherit one. A DreamWorks/PDI production, Shrek 2 transplants the first picture's bitterness towards Disney, though the characters it skewers are in the public domain (Sleeping Beauty, the three little pigs, Hansel & Gretel, Pinocchio, and so on) and happen to be among the icons that Disney, by and large, never dishonoured. Without a viable target, then, the film is the kind of satire-less satire that mistakes being a self-congratulatory trivia game designed for beginning players for being a post-modern commentary on fairytales and, more specifically, the traditional Disney animated feature. There's no sharpness inherent in making reference to Spider-Man or Peter Jackson's The Lord of the Rings saga (just as there was no sharpness in referencing The Matrix in the original), and imitation has no point of view, just a brief rush of pride and bemusement for folks generally unused to catching the allusions. To say the picture functions best for the lowest common denominator (note a trio of flatulence gags) isn't entirely fair--but it's accurate.

Taking up where the first leaves off, ogre Shrek (voiced by Mike Myers), his bride Fiona (Cameron Diaz), and sidekick Donkey (Eddie Murphy) enjoy a bunch of artificially-sweetened musical montages, some broad slapstick, and the same shop-worn, vaguely hypocritical message of beauty's skin depth while skimming over more disturbing material such as how Fiona's parents (John Cleese and Julie Andrews (playing a queen professionally now)) appear to be horribly abusive and conniving. The Fairy Godmother (Jennifer Saunders) and her son Prince Charming (Rupert Everett) provide the antagonism, while the picture is stolen by Antonio Banderas' underused and brilliantly conceived Puss-in-Boots. Lacking surprises otherwise, Shrek 2 is a populist, facile entertainment that rolls over you and away into forgetfulness like a lackadaisical breeze. It's full of dead spots, speaking to a lack of spark in its writing and direction as well as to a certain gracelessness in its editing and pacing that results in the picture running long at around eighty-five minutes.

That musical numbers, including new versions of Bonnie Tyler's "Holding Out for a Hero," dwarf too-brief performances by Tom Waits, Nick Cave, and Joseph Arthur speaks to the artistic bankruptcy at the heart of the exercise: DreamWorks indicates that they have the wit to discern the dangerous and the brilliant, just not the courage to hang their most profitable franchise on something potentially brave and transgressive. The very definition of a critic-proof picture, Shrek 2 seems to know it and so treads the same tepid water in the same tepid fashion. It's the kind of event film that people are afraid to admit they dislike, but with Pixar setting the example for smart animation in the United States (and Japan setting the example in the world), there's really no reason to settle for these vacuous lightshows. The only real satirical irony embedded in the film is the fact that DreamWorks, the supposed anti-Disney, is producing product the unfortunate equal of their archenemy--I wonder what they'd see if they turned that snarky Mirror, Mirror on themselves. Originally published: May 19, 2004.