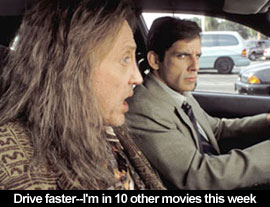 by Walter Chaw Reminding a great deal of the masticated wonderlands of Joe Dante's The 'burbs and his own Toys, Barry Levinson's Envy operates within a carefully constructed artifice. It's a fantasy of suburbia filthy with arrested men-children and the dolls who love them, helplessly acting out music-box morality plays against a backdrop of outsized slapstick. At it's best, the film evokes the diorama lollapalooza of Tim Burton's Edward Scissorhands (indicated by its affection for the image of a snow globe), floating along on the undercurrent of meanness that defines Burton's Pee-Wee's Big Adventure like a twisted form beneath a multi-coloured blanket. Disturbingly unmoored monologues about the joy of running a pretzel stand and an invitation to catharsis as "let it tumble out like circus freaks" are made all the more peculiar by the delivery of Christopher Walken, playing a character named obliquely--after Kafka or Christ--J-Man. Redemption and oppression in one Camus parcel, Envy is the story of an everyman toiling under the yoke of the peculiarly American sickness of being completely average while nursing a sense of outrageous entitlement.

The self-esteem nation finds its crass voice in a parable involving a product that vaporizes shit--brilliantly, in the hands of non- or ex-personalities like Jack Black and Ben Stiller, it's a little like slugs starring in a movie about salt. Tim (Stiller) and Nick (Black) work for 3M; Nick is a dreamer, Tim is a dedicated sandpaper executive who passes on the opportunity to invest at the ground floor in Nick's latest invention: Vapoorize, an aerosol that, with the help of a crazed Russian 3M R&D man (Manny Kleinmuntz) and a successful run on the HSN, makes Nick rich beyond the wildest dreams of wealth. His wife (Rachel Weisz, breathtaking) resentful and coveting liposuction, his family suddenly developing a taste for flan, Tim is broken by the titular green-eyed monster, even as Nick remains a steadfast and hale chum, refusing to move out from beneath the power lines and low-flight routes of the suburban street he shares with Tim, choosing to build his palatial Xanadu on his half-acre lot of the American dream. Tim's bile causes him to lose his family, his job, and his sobriety, transforming him into a strange bedfellow for J-Man and, during a drunken act of senseless archery, a murderer of Nick's beloved white stallion, Corky.

When Envy works, it works because of its gleeful absurdity. And when it fails, it fails because it tries too hard to brush its absurdity off as gentle misunderstanding. The struggle between courage and compromise is evident in the sloppiness of the piece; never a fan of Levinson, I can say at the least that his films paddle along with a certain slick narrative logic endemic to filmmakers without the wit to improvise, yet Envy is all improvisation. It's leaning-too-far-back-in-the-chair off-the-cuff, from long stretches of dialogue to last-minute edits and hilariously bad looping that renders every transitional scene in long shot one in which screwball repartee has been inserted as the alleged speakers ride along with mouths resolutely shut. The picture's sloppiness is part of its charm, the coarseness of its look giving it the patina of nostalgia for those intriguingly horrible '80s buddy comedies (Zapped! comes to mind), which felt dirty and transgressive no matter the subject matter. Envy fails in the comparison because it can't seem to find it in itself to make either of its leads genuinely despicable, thinking that the best bet is the safe one--it turns away from the prize and becomes a fable of reconstruction rather than a chronicle of the wasteland. The primary problem with Envy is that it's a ventriloquial picture where the master is the group taste instead of any clear, pontifical, even directorial, voice.

A ship of fools without a captain, Envy buffets around with sharp stabs of genuine satire (not of friendship, but of how we fear and adore the trappings of our material possessions), providing a few genuine laughs along the way mainly on the strength of our expectations that Walken is amusing now no matter the situation. It's a picture that plays better outside of itself as we rush ahead of it, the film rewarding our prescience and experience with the exact payoffs presented in left-of-true tableaux of which Brecht would be proud. The corpse of the stallion, for example, buried and exhumed more than Hitchcock's Harry, is shown at one point as a shadow dangled ridiculously and at another as a stiff silhouette beneath a blue tarp, both instances the silent punchline of an implied joke while Tim and J-Man bicker over the logistics of disposal and extortion. Envy is about the absurdity of choices and responsibility in a world governed by caprice--a post-modern treatise, in its way, that makes of the requisite heartfelt confession something ultimately useless and, until its simpering epilogue, gratifyingly empty. Without all its fat (four kids, Amy Poehler as Black's wife, poor Weisz reduced to straight man) and its obvious concessions to the pop grist, Envy would be a cult classic (it might become one despite them). As it is, the only sure thing is that Envy is an intriguing near-miss--and better than you'll be led to expect because of it. Originally published: May 5, 2004.