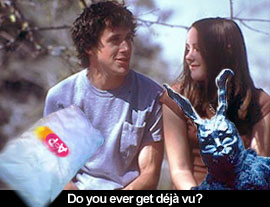 by Walter Chaw Featuring the valedictorians of the indie brat pack past and present, Matthew Ryan Hoge's sophomore hyphenate feature The United States of Leland is woefully overwritten, self-indulgent, and plodding--a shame given the squandering of another nice clenched-jaw performance from Ryan Gosling, and no surprise given the full martyred weight of actor/producer/saviour-of-mankind Kevin Spacey, thrown behind the project as simultaneous catalyst for completion and guarantee for failure. Pedestrian in look and execution, it's the sort of kiddie cautionary tale (wed here uneasily to our new cinema of disaffected nihilism) in which a message of the tragedy of the widening gyre is resolved with its main adult character cradling a limp body and howling his outrage to the uncaring heavens. If Mel Gibson were to take on a Judy Blume adaptation, it'd look a little like this.

The troubled son of asshole, alcoholic writer Albert (Spacey, who plays this role a lot now), Leland (Gosling) one day--because the world is so terribly beautiful--kills autistic kid Ryan (Michael Welch) with a knife and then stabs himself in the hand so that he knows what it feels like to feel. Later, someone will confide in Leland that "I didn't do anything wrong except make a lot of mistakes," while a statue of Icarus makes a never-subtle appearance in the study of Leland's home.

Mom is Lena Olin, the parents of the dead kid are Martin Donovan and Ann Magnuson, doomed Leland's junkie girlfriend (and sister of the dead kid) is an unusually awful Jena Malone (playing this role a lot now, too), and dead kid's other sister and boyfriend are Michelle Williams and Chris Klein (who should not now, nor ever, be asked to play a dramatic scene). The sad-eyed teacher at Leland's maximum-security juvie hall is played by the consistently disappointing Don Cheadle, an actor who has yet to live up to his breakthrough performance in Devil in a Blue Dress and does little to inspire confidence in what is essentially the guidance counsellor role in a particularly clumsy teen tragedy.

The none-too-subtle message carried in the film's title is that Leland is par for the post-Columbine course in millennial America, but Hoge doesn't have the courage to let be and thus provides countless opportunities for all involved to pontificate on the abysses pounding in their chests. The none-too-subtle central device of the picture concerns parallax, broadcast in several point-of-view shots of characters carefully closing one eye, then the other: now you see someone, now you don't--it's all a matter of perspective, get it? And then there's the idea of the illusion of movement within stasis, right, and maybe a nod to the subjectivity of film as a vehicle for agenda. The United States of Leland plays out like a student film from a particularly pretentious student: a tease of a picture that seems surprised that the big ideas it has aren't enough to fill its running time, and so resorts to repetition and unforgivable inflation. Striving for apocalyptic, it achieves cheeseball--the soul brother of Home Room, and exactly the sort of facile sociology that drives sensitive, intelligent souls like Leland batshit. Originally published: April 16, 2004.