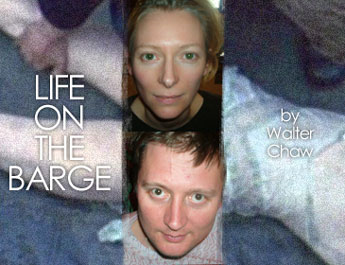 April 25, 2004|It's in the mezzanine of what remains one of the more interesting places in Colorado to see a film, Denver's Mayan Theater, that I've come to meet Scottish director David Mackenzie and one of the stars of his sophomore film Young Adam, the strikingly, ethereally beautiful and staunchly uncompromising Tilda Swinton. Far more delicate-seeming in person than on the screen, Ms. Swinton is dressed in a loose brown shirt that she'll pull over her legs, knees folded against her chest, several times during the course of our conversation--a charming, almost alarmingly childlike pose from an actress I most readily associate with ferocious, audacious turns in Derek Jarman's free-verse celluloid poetry and best-of-bad-movie appearances in everything from Vanilla Sky to The Beach to The Statement. Her work marked by a driving curiosity about the riddle of (most often sexual) identity and the role of film as oral tradition, she proves to again be the strongest ingredient of a conflicted picture, playing the role of a disquiet wife of a bargeman in Young Adam with her trademark ferocity and intelligence. Mackenzie, by contrast or complement, is a little shy, almost sheepish. We traveled a little way from Young Adam to talk more generally about poetry and the cinema, as well as the damnable inadequacies of conventional communication.

FILM FREAK CENTRAL: Young Adam is about surfaces, and submersion.
TILDA SWINTON: Ah. Indeed.
DAVID MACKENZIE: Very interesting observation that you open with because I think that's the crux of the entire challenge and point of the exercise--you know when you start with a first-person narration, as we had to do with the Alexander Trocchi novel, what happens is that you have to find ways of externalizing all the interior torments and secrets of the narrator. Joe, obviously, harbours a great many subsumed elements, one secret in particular has to be kept below the surface--everything in the film is filtered through that lens, those layers upon layers of identity and deception from the beginning that mute everything that we see and know of these characters. The quiet, that stillness of the situations, but then there's that storm underneath.

The washing scene, the tattoos--the care with which you construct your images and your homage to Jean Vigo's L'Atalante in naming the barge "Atlantic Eve," struck me.
DM: Right, where the barge in the book doesn't have a name. It's impossible to make a film about living on a barge without owing a tremendous debt to Vigo's film, of course, but I tried to honour his vision of creating distinct environments for each part of the vessel: I lit each interior differently, I wanted to capture the interior spaces each in a different way as Vigo did. That being said, I tried really very consciously to avoid too much analysis of the piece as we were making it. Of course, the location of the barge right in the middle, floating on the surface as you'd say, is loaded, but...
TS: But for as much of a liminal space as we occupy during the course of the film, the river is always moving as well--and that mobility is important in that you're only ever seemingly in stasis on a river. There's something about the experience of being on a barge: it's very slow, but it's also very relentless. You sit on it, on the front of it and it feels stately and serene, but you fall off and it's brutal, and it's that relentlessness, that almost animal, insensible brutality, that duality that is fascinating about the setting and its function as metaphor.

The idea of a placid surface disguising turbulent deeps fuels your forays into pictures, even ones in which you're not the star--Adaptation., Vanilla Sky, and so on.
TS: (laughs) I'm really quite boring, it's all one big work in progress, I keep doing the same things over and over. The whole idea of hidden depths--a kind of unspoken lexicon of being, somehow... I've worked recently quite a lot with characters suspended in a state of solitariness, thinking a little now of certainly The Deep End and this strong idea of isolation.

A career-defining image is one in The Last of England where you tear off your wedding dress. That sort of says it all.
TS: (laughs) I should tell you that each time I feel as though I'm getting deeper into something of the core. In Young Adam, she reaches out in a way that the woman in The Deep End can't. In many ways this film, this work into this character, is something of a transition for me from where the character in The Deep End leaves off--the fact that she reaches out through this albeit unspoken dialogue with this man, Joe, the fact that she has any kind of dialogue at all... It felt right and interesting for her and for myself. The way in which Trocchi writes in his book about this character, splitting Ella into "my Ella" and "his Ella," that brilliant array of this character rent in two as part of a triangle and side-by-side, the idea of a refracted identity that requires a switch, effortlessly, back and fro. A challenge, and comfortably within the broader context of this personal exploration of mine.

What are your thoughts on the scene where you offer Joe an egg after you've slept with him for the first time.
TS: I think she's very unconscious, my Ella. She's no intellectual and that's an interesting step for me to take because I realize that I'm very much the intellectual and it's useful for me to play a woman who makes patterns in a different way. I don't think she really thinks that much about much--she feels, she senses, but only almost as an intimate reaction: sexual, fearful, angry--she's myopic, really, and things have to be very close to her for her to notice them. I don't think she has much of a wide view of things, I mean, she's been brought up on this barge, maybe there's the metaphor for her right there--she has a lozenge-shaped existence. She has blinkers.

Trocchi's piece is essentially an epic beat poem.
TS: For me, I'd love to move closer to the tone poem--I think that the best parts of my pictures are the ones that move away from strict narrative and closer to that ideal of image and rhythm. But the realities are that for your film to ever attract an audience, the only way that you can indulge in the poetics of filmmaking these days is by examining the narrative for moments in which to insert that element of the artistic, to stick a little poetry into strict exposition. I would love to be getting more and more abstract where I can, and trying still to hold together some sort of narrative even if it's in decay.

Derek Jarman, of course: all about tone poems.
TS: Exactly right, and I've been talking about him more lately because it's ten years this last February that he's died and sometimes it feels like twenty because there's all this generation of audiences and critics that don't know a thing about him. He was so much ahead of his time, though, many of the things he tried in terms of rhythm and visual storytelling you see now in new "groundbreaking" pictures, so it's important all the more to talk about him, to be sure that people know that he's coming available on DVD, but also films like Last of England I recently saw on a 35mm revival and it just blows you away. Pure genius.

I read somewhere, David, of your affection for Jean-Luc Godard's Week End.
DM: And of course it's Godard's poetry that makes me really kind of go like goosebumps.
TS: But it's very interesting that you should be talking about that because that, maybe more than anything else, I mean you talk about beat poems and existential crisis, but actually just the broader term of poesy is the best, most accurate one to use when we talk about the wider problem of speaking film. What we try to do through film is to deal with and trying to be honest about a degree of inarticulacy which is one of my favourite themes in films, but really in the whole poetic sphere. It's the idea that you can't actually, that it's completely impossible to express yourself satisfactorily, but here, let's try with words and not just words, but images and the gaps between them and suddenly you're catapulted off into cinema. It's something that Godard understands and that Derek Jarman understood. It's funny, I was asked before about something like this in a really banal way about how little dialogue there was in the film and I was at a loss to articulate how we managed.

Even the term "gap" is a sexually suggestive one.
TS: Right, right.

Back to the idea of inarticulacy--talk about listlessness in our post-modern cinematic conversation.
TS: The "inaction" hero. A lack of confidence in communication, the real difficulty of it for young, alienated people--artists or no.
DM: Consider the title of the picture, Young Adam and certainly it's a loaded one, weighed down by all that allegory and archetype you know, but the trick is that the picture is really godless in its way.

I'd offer that it's in fact pretty godly, if you consider that it's William Blake's Romanticist view of an apathetic deity--that the only active force in this universe, Joe, represented at least in part by the Industrial Revolutionary symbol of coal, is demonic and, for the way he stirs the pot, the very definition of a necessary antidote to ennui.
TS: That's fascinating, because the film is really quite Blake, isn't it? He's the original Beat, after all, and another great irony of that analysis is that the river that the barge is on is due to be drained--it's passing into nostalgia like all of great Romanticism, it's life in flux and living with disappointment, and being incapable of positive motion.

Speaking of Heaven and Hell, you're playing archangel Gabriel in the Hellblazer adaptation Constantine. Was Garth Ennis involved in the adaptation process?
TS: I think fans are going to be well served by this film. Ennis wasn't involved while I was there, but I think he was certainly involved at some point--but regardless, it's very, very dark. I'm looking forward to seeing it myself, it's going to be absolutely Stygian. I didn't know anything about the comic before being involved with the film, but I can say to the fans, rest in peace because it captures, I think, that sort of spiralling darkness--and of course meanwhile it talks about all my issues of finding your place in the world and discovering who you are and what you've pushed beneath your surfaces, probably to your detriment.