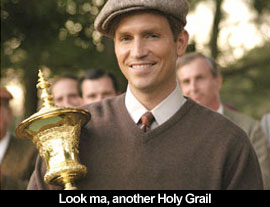 by Walter Chaw Displaying a troubling affection for long-suffering historical figures planted in the middle of amped-up costume epics, James ("I prefer Jim") Caviezel follows up his dazed turn as a saviour with another dazed turn as a saviour: Bobby Jones, the last voice of virtue in professional sports, steadfastly refusing to take one filthy piece of silver and so betray his amateur (Latin root: love) status on the PGA tour. Scored by another tongue-bath of a score by James Horner (bring a squeegee and a change of clothes, you'll feel like you've taken a swim in a spittoon), Bobby Jones: Stroke of Genius is every bit as episodic, derivative, patronizing, and bloated as Horner's compositions--the man, by himself, defining a genre of picture perhaps fatally damaged by his very intrusion. (If there's any one indicator that the upcoming Troy is going to be awful, it's that Wolfgang Petersen (himself no great source for confidence) has elected to reunite with Perfect Storm collaborator Horner.) But there's so much more wrong with Bobby Jones: Stroke of Genius than just the music, the winking title, and the truism that for as boring as golf is to watch on television, it's that much more boring to watch in reverent celluloid slow motion--no, the picture is also fatally tagged by a terrible screenplay and terrible direction (that includes a half dozen ball's-eye view shots: not as interesting as you might misunderstand), as well as the dreadfully persistent belief that the measure of a man's life are the crescendos and valleys rather than the caesuras and grace notes.

Bobby "I prefer Bob" Jones (Caviezel) is a waxy, somnambulant Georgia boy given to profanity and the occasional tantrum. The son of a lawyer (Brett Rice, channelling Ned Beatty) and a harridan (Clara Jones), Bobby, because he was sickly, irritatingly fey, and dangerously over-protected as a child, becomes a great golfer, and, taking a moment to marry Nurse Grimace (Claire Forlani) while at Georgia Tech, continues onwards in his quest to become the first man in history to win the PGA's four major tournaments in one calendar year "Grand Slam." Because two-plus-hours isn't enough time for key plot points and sources for much-needed tension, a series of end-cards helpfully informs of the significance of this accomplishment, of Jones's aspiration to build a golf course in his native Georgia to honour Scotland's St. Andrews, and that he was afflicted with a rare, painful neurological disorder called syringomyelia. So important are these motivators and explicators that it's fair to wonder what exactly the rest of the film fritters away its hours nattering on about; fair to say that I don't have any idea.

Bobby Jones: Stroke of Genius is the same sort of serio-mythic sun-dappled hagiography as The Legend of Bagger Vance or The Natural, an unquiet mishmash of genres that includes the perfunctory heatless marriage to the perfunctory long-suffering wife and a series of context-free sports intrigues that segue into a series of shrug-worthy trophy ceremonies. There's nothing at stake here in a film about someone who was arguably the best golfer in the history of the pastime: Will he be banned from the tour for his temper? We know that he's not. Will he get the grand slam? We know that he will. Without much in the way of conflict, then, what's left is a piece that relies on every other element of story and craft to convince us that there's a reason we've gathered to watch Malcolm McDowell, self-consciously good as two-fisted octogenarian sports writer O.B. Keeler, or Jeremy Northam, excellent as hedonistic Walter Hagen, the anti-Bobby, if you will--it's unclear what flag they're saluting. Bobby Jones: Stroke of Genius is a morality tale disguised as Seabiscuit that's even more wearying somehow than Gary Ross's road apple horse opera (not helping is a desperate tagline: "His Passion Made Him a Legend")--damning Caviezel along the way as a charisma vortex as an actor, infinitely better at symbolizing than embodying. As an actor he's a good plaster bust, and Bobby Jones: Stroke of Genius is just the hermetically sealed showcase for his display. Originally published: April 30, 2004.