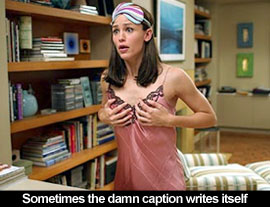 by Walter Chaw Threatening at any moment to veer off the populist tracks and become something legendarily, unpleasantly subversive, the middling 13 Going on 30 is really little more than a collection of "I Love the '80s" vignettes presided over by Jennifer Garner's peculiar mien. It's also peculiar that the genre of body-swapping/quick-aging jibber-jabber is making a resurgence now a couple of decades after the last spate (18 Again, Vice Versa, Big), and peculiar again that with Mark Waters's Freaky Friday and Gary Winick's 13 Going on 30, the genre is being re-imagined through the prism of young women. (Perhaps not so strange when you consider that the key demographic slavered over by studio wonks has shifted from the pre-adolescent boys of the mid-'80s to post-Titanic pre-adolescent girls.) It's clear that this film is meant to satisfy some sort of wish-fulfillment fantasy for 13-year-old members of the babysitters' club, but with Eighties references that can only be amusing to people who've passed the third-decade mark, it manages mostly to be a wish-fulfillment fantasy for thirtysomething men who want emotionally immature, sexually malleable women who happen to resemble television starlets.

On her thirteenth birthday, Jenna (Garner as an adult, Christa B. Allen as a child) is mortified, rejects her homely next-door neighbour Matt (Mark Ruffalo, Jack Salvatore, Jr. as a child), and wishes she were thirty and sassy. The next morning, she wakes up seventeen years into the future a successful magazine editor (see also: How to Lose a Guy in 10 Days), girlfriend to a New York Rangers player, and, apparently, a cast-iron bitch, one whose sudden transformation into a juvenile delinquent, if noticed, goes barely commented upon. 13 Going on 30 is really more a distaff redux of Regarding Henry than of Big, with its protagonist robbed of any memory of prior misdeed and given a childlike demeanour and outlook on life that teaches everyone in her orbit a little about themselves and what's really important in life. I'm already sick of talking about this movie. Garner has no charm, Ruffalo's charm is wasted, and Gollum (Andy Serkis) as Jenna's boss is a curiosity.

Jenna growed-up is embarrassed by the sight of her boyfriend's "thingy," makes a pass at a thirteen-year-old boy (inexplicably having lunch alone in a bar in Manhattan), and does her best to transform her magazine (POISE) into the ABERCROMBIE & FITCH catalogue. The ingredients are there for 13 Going on 30 to be one of those movies that's enjoyable for all the wrong reasons, but its dedication to being bland and uplifting deflates much, if not all, of its potential bite. Sequences in which Jenna gets a nightclub full of aging partygoers to do the group dance from Michael Jackson's "Thriller" video and hosts a sleepover with a bunch of little girls (yes, it's weird) aren't so much nostalgic as curiously quaint and defiantly unfunny. A conclusion that plays with time-travel concepts drops the ball in regards to showing how a "nice" Jenna would have turned out without any sort of career success and wealth; where the untampered-with "mean" Jenna had it all, letting the "new" Jenna have her cake and eat it too during a rosy epilogue speaks to the general cowardice of mainstream film in the United States. 13 Going on 30 goes right on the scrap heap as another flick that makes you want to read the first draft of the screenplay to see exactly how much of it was sanitized for your delicate sensibilities. Originally published: April 23, 2004.