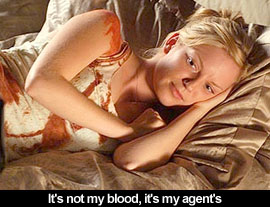 by Walter Chaw Heretical to even suggest it, I'm sure, Zack Snyder's remake of George A. Romero's Dawn of the Dead surpasses the original in any number of ways. It gives the idea of consumerism run wild the short shrift that it deserves (and the cynicism that an intervening quarter-century demands), touching on the original's explanation of the zombies' affinity for the shopping mall and the human heroes' delight at their newfound material wealth before becoming a bracing action film that, like Marcus Nispel's reworking of The Texas Chainsaw Massacre (the source of which didn't need updating as much as Dawn arguably did), is more firmly entrenched in the James Cameron Aliens tradition than the Seventies institution of disconcerting personal horror film. There's nothing like fat on the bone of this picture (something the original can't claim), providing a canny demonstration of how comedy and satire can work without descending into slapstick (no pies in zombie faces this time around), and of how great performances and smart direction can craft a piece that honours its origins while significantly upping the effectiveness of its themes and premise.

Nurse Ana (Sarah Polley, right at home in a zombie movie and looking a lot like all three protagonists from Romero's Dead trilogy) goes home after her shift and wakes up to a world in flames. Emergency vehicles careen through sleepy suburban Wisconsin streets and the little girl next door takes a chunk out of Ana's husband's neck. Dawn of the Dead opens gangbusters, its prologue--which segues into a title montage scored just right to Johnny Cash tune--the most nihilistic-feeling bit of cinema I've seen since the first broadcast of The Day After, and right in line with our apocalyptic cinema environment. Ana flees to the sanctuary of an abandoned shopping centre in the company of a cop, Kenneth (Ving Rhames), everyman Michael (Jake Weber), a young man, Andre (Mekhi Phifer), and his very pregnant wife, Luda (Inna Korobkina), where they encounter a trio of over-zealous rent-a-cops and, eventually, another group of survivors. Meanwhile, Bruce Campbell look-alike Ty Burrell steals the show, getting a little "Ash" on a few of the evil dead.

The shop-worn idea of man being man's own worst enemy is played with and cannily discarded as Dawn of the Dead settles into an excellent action film and a consistently entertaining B-movie that reminds a great deal of what worked about Tremors. A brilliant sequence in which Kenneth and gun-shop owner Andy (Bruce Bohne), marooned across a parking lot on the roof of his store, engage in a game of celebrity skeet shooting (the zombie "Burt Reynolds" gets one in the brainpan, which, by itself, earns the picture a recommendation) touches on our relationship to the cult of celebrity in the same breezy way as its commentary on consumerism. Almost better is the insane peril risked on behalf of a canine protagonist, a more damning look at our misplaced values than almost anything in the original and the sort of device that justifies revisionism. The only things keeping Dawn of the Dead from soaring are a quartet of characters (the doomed dad, the slut, the slack-jawed yokel, the cross-dressing émigré) who function as distracting padding--and the sort of squeamishness in regards to hardcore gore that our culture of creeping sanctimony has made par for the course since the grand guignol of the original. (A squeamishness that doesn't apply to movies about torturing hippie saviours to death, apparently.)

A self-ribbing selection of Muzak--"Don't Worry Be Happy" greets our heroes, Eric Carmen's "All By Myself" accompanies them when they unwisely split up, "Right Time of the Night" goes along with a subtle homage to Night of the Living Dead--is only the subtlest example of Snyder's unusually accomplished hand at the helm. Ken Foree, Scott H. Reiniger, and Tom Savini make cameo appearances (meaningful ones at that), and a zombie birth stands as one of the most horrific, squirm-inducing screen spawnings since David Cronenberg's own retooling of The Fly. Dawn of the Dead is exciting and exuberant: moored in Romero's subtext, but anchored by its craft and respect for genre. It's driven by cinema rather than theory, fitting comfortably into the new wave of technically proficient, thematically nihilistic horror films (from The Ring to Elephant to The Passion of the Christ)--marking the discomfort, the weariness, and the great divide of America tentatively testing the murky waters of our new millennium. Originally published: March 19, 2004.