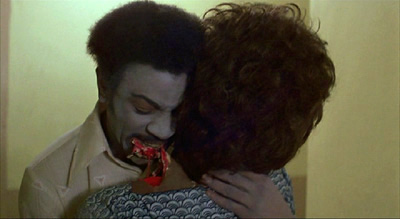 by Walter Chaw There's a shopping mall in Colorado called "Colorado Mills" that bubbles with the kind of nameless existential dread generally reserved for terrariums and introspective box turtles. Its architecture--a mountain womb of logs and waterfalls--seeks to replicate the feeling of a village, so that the impulsive consumerism it encourages is disguised as foraging in some fantasy of frontier life and the mob of co-capitalist pilgrims shuffling along appear as a murmuring throng of fellow villagers--wayfarers with whom you have a polite agreement to neither speak to nor make eye contact with. Human interaction is dangerous, for it dispels the illusion of comfort.

The common reading of 1978's Dawn of the Dead has it as a satire of this consumerist wonderland, with its zombies wandering around a new-for-the-time shopping centre, and indeed, writer-director George A. Romero is prescient for his discomfort with the burgeoning phenomena of shopping malls. But this is hardly enough meaning to justify the picture's bloat; I don't know that there are many better films from the sixties than Romero's exceptional Night of the Living Dead (1968), just as Day of the Dead (1985) ranks high on the list of the incomparable fantasies of the eighties, yet I have always harboured doubts about the canonical value of Dawn of the Dead. The film strikes me as something akin to a Wagner opera: one brilliant movement and three hours of repetition, noodling, and variations on an increasingly tired theme. The civil politics of the first picture and the gender politics of the last are more implied by the casting (and shoehorned into a tight opening scene in an infested tenement) than explored in the body of the picture.

Four survivors--S.W.A.T. team members Peter (Ken Foree) and Roger (Scott H. Reiniger), pregnant anchorwoman Francine (Gaylen Ross), and chopper pilot Stephen (David Emge)--hole themselves away in a shopping centre to take refuge from a zombie plague that appears to have laid the United States to waste. Slow-moving and mindless (and the film eventually follows suit), the zombies aren't really much of a threat to the humans so long as they remain vigilant and their ammunition holds out (restocked by an ammunition store that stands as pithy commentary for its abundance). More of a threat is the intrusion of a band of marauding bikers (led by special effects guru Tom Savini) who threaten the central quartet's material utopia.

For all the brilliant scenes of lifeless automatons shuffling along to Muzak and trying to go up the down escalator, there are a dozen sequences where the heroes run around shooting zombies in the head and looting abandoned department stores. A reductive, puerile fantasy rife with inconsistencies (some zombies don't appear to be fazed by dismemberment, others recoil at having their fingers burned (something that strengthens the concept's debt to Frankenstein); some zombies wield tools while none seem capable of operating a door knob), Dawn of the Dead's effectiveness is deadened by its repetitiveness and surprising dearth of ideas. Condemning our culture of excess is a worthy pursuit--doing it to excess is ironic. That being said, the picture does wonders with its miniscule budget, boasting of gore effects that at least startle with their quantity and a quartet of performances that are amateurish, no question, but convicted and persuasive. Foree and Ross, in particular, bring a little apocalyptic doom to their readings: a scene where Ross refuses a proposal cutting to a heartbreaking domestic tableau ranks as both highlight and foreshadow of Lori Cardille's conjugal fantasy sequences from Day of the Dead.

Overlong and underfed, Dawn of the Dead's place in the canon seems assured by dint of it being a film in a disreputable genre that wallows in its grue while presenting a few clear satirical jabs at broad targets. (Comparing the zombies to first storefront mannequins and then the heroes, made fat on a diet of leisure and intemperance, is a nice touch, for instance, but an obvious and ultimately not very enlightening one.) For my money, John Carpenter's Halloween, released the same year, is smarter, sharper, and more influential. In fact, the most fascinating sequence of Dawn of the Dead is the climactic biker invasion, not for its embarrassment of gore effects (and pie-in-the-face silliness), but for the sense of proprietary outrage that we feel for the violation of "our" mall zombies. It's a little scary just how quickly we identify with this shambling legion of bargain hunters--something that speaks to a more fruitful dialogue about the connection between the zombie mythology and the ritualistic cannibal/resurrection cult of Christianity.

THE DVD
Just in time for the remake's multiplex debut, Anchor Bay releases the theatrical cut of Dawn of the Dead in a DiviMax edition that looks just fabulous, even as it mildly disappoints with the quantity (or rather, lack thereof) of its supplementary material. (The studio is planning a deluxe DVD package for the fall that will incorporate at least three versions of the original Dawn of the Dead (this one, Romero's Cannes cut, and Dario Argento's streamlined re-edit) as well as a host of extras.) With "DiviMax" referring to a process of remastering from a HiDef source, the anamorphic widescren transfer, matted to 1.83:1, crackles and hums: colours are brilliant (too brilliant at times, highlighting the cheapness of some of the gore effects), and there's minimal edge enhancement or grain--particularly for a film shot over twenty-five years ago. The film has also been equipped with a 5.1 remix in DTS and Dolby Digital flavours; though the rear channels are used sparingly (if logically), a lack of atmospherics seems right in keeping with Dawn of the Dead's sterile sets and, frankly, its lack of tension and fear. For what it's worth, Goblin's (overrated for this film) score sounds more fulsome in DTS. In truth, the mono listening option is sufficient.

Anchor Bay offers that Holy Grail for fanatics, a feature-length yakker featuring the reclusive Romero, his wife and assistant director Chris, and Savini moderated by Anchor Bay DVD chief Perry Martin, who, through his wise and intuitive guidance, reveals a large portion of the reason that his distribution house is the envy of the catalogue business. While long stretches of the track are devoted to a fund-raising effort to sponsor a fourth "Dead" film (and why won't someone take the chance already?), Savini and Romero offer a FANGORIA-fans wet dream of technical information behind the low-fi F/X. Personally, I felt vindicated by both Savini's and Romero's assertions that Day of the Dead is, in fact, their personal favourite of the three. Night is still the best film, but there's something about the humanity of Day that makes it the most poignant.

The sparse presentation is rounded out with a pair of remastered theatrical trailers; three scrolling television spots that appear to be aping a little of the popularity of the recently-released Star Wars; nine vintage radio spots accompanied by stills from the film; 25 promotional stills, posters, and lobby cards; a typically great Mark Wickum bio for Romero; a two-page DVD insert full of inane ravings; and a shot of the cover art from the upcoming comic book adaptation (by Steve Niles, a writer I don't like, and Chee, an artist I've never heard of). An Easter Egg of Savini telling a story of how he once scared the crap out of his girlfriend can be found by highlighting a zombie silhouette on the audio options page. Incidentally, I love the menu design. Originally published: March 18, 2004.