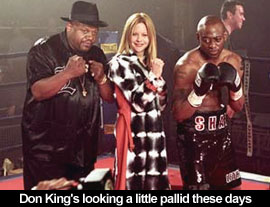 Erin Brockovich with more boxing, Charles S. Dutton's Against the Ropes (released in the same time of year as Steven Soderbergh's surprise obliterating feminist uplift drama and likewise inspired by the true story of a crass woman from a blue-collar background making good) is interested in mythmaking in the way that boxing manager Jackie Kallen, the subject of this would-be biopic, was. Oddly enough, the film is also interested in marginalizing its minority "product" in the way that Kallen is portrayed to have been by the film. Ostensibly the story of Kallen (Meg Ryan) discovering middleweight James Toney on the streets and fashioning from such rough loam the stuff of a boxing hall of fame shoo-in, the film takes so many liberties with history that the "truth" resembles a Hallmark Hall of Fame production complete with a jaunty score by the late Michael Kamen that made me want to punch something. It's lowest-common-denominator filmmaking, a shake-and-bake Oprah Winfrey urban melodrama that hits all the Wildcats-meets-Rocky moments of saccharine populist uplift on its road to instant Palookaville.

Toney is fictionalized in the film as Luther Shaw (Omar Epps) and managed by veteran corner man Felix (Dutton), who has the exhausted task of being the old master lured reluctantly out of retirement by Kallen. Against the Ropes devises from Kallen's uphill battles in the boys' club a studied machination both clockwork and calculated. There's a training montage, of course, plus badly-edited boxing choreography that doesn't completely obscure Epps's lack of fighting skill. And there are a lot of spunky speeches for Meg Ryan, twisting her Cupid's-bow lips around a husky Brooklyn accent.

But if there's an audience out there, and there is, for movies this unimaginative and comfortable, there should at least be a moment of pause when the conflict of Against the Ropes finds itself reflected in the film's own treatment of Epps and Dutton. Ryan is the ostensible centre of the film, sleepwalking through the kind of high-maintenance cutie she's been typecast as for the whole of her career: she's easily the least-interesting aspect of the picture, yet Against the Ropes, trying to draw a female audience to a boxing film, I guess, seems more interested in showing Jackie taking her charge for granted than in depicting her struggles in a male-dominated profession. Epps and Dutton are the most interesting things about the picture, but they're given so little time to explore their characters that they come off as glorified cameos aggrandizing the relatively disinteresting Kallen underdog story. Kallen doesn't realize that her meal-ticket is the boxer she embarrasses at a press conference with her patronizing remarks, and Against the Ropes doesn't realize that its meal-ticket is its supporting cast and so patronizes them, and us, with caricatures for characters.

Caricatures as characters can work, however, and do in indie maverick Bart Freundlich's descent into the 'tween mainstream with Catch That Kid, a remake of the Dutch kinder-caper Klatretøsen. Three kids led by spunky Maddy (dour Kristen Stewart, looking less now like a Culkin boy) endeavour to break into a high-security bank for the quarter-million needed to get Maddy's dad some kind of limb-saving surgery. There's stuff with go-karts, stuff with puppy love, and lots of scenes where the parents in the audience sort of amuse themselves by remembering with a combination of wistfulness and guilt when Jennifer Beals (as Maddy's mom) played a stripper/welder. There isn't much character development in the piece beyond the standard heist compartmentalizing of assembled specialists (the climber, the engineer, the hacker); a late game high-speed chase involving the coppers raises eyebrows for the irresponsibility of it while entertaining for the escapism of it, and the whole of Catch That Kid resolves as something of a knee-jerk Judy Blume coming-of-age weeper with gadgets, shameless plugs for video game systems, and attack dogs. It's not terrible, it's just everything that you'd expect, with the only surprise that it doesn't wear out its welcome before it's over. Originally published: February 6, 2004.