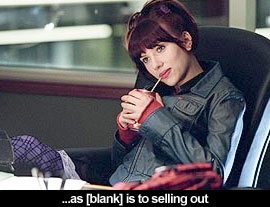 by Walter Chaw A remake in quality and spirit of the "what were they thinking" classic Hackers, Brian Robbins's The Perfect Score is one of those stunted adolescent teensploitation flicks that makes one pine for the suddenly-glory days of Fresh Horses and The Breakfast Club--which, as it happens, seems to serve as this flick's carbuncular muse. A band of five disparate high school washouts meet in detention--errr, during a PSAT test--and plot to steal the answers from SAT headquarters. The Jock is played by real-life jock Darius Miles; the basket case is Roy (Leonardo Nam); the princess is Anna (an even more zombie-like than usual Erika Christensen); the brain is Francesca (Scarlett Johansson); and the punk is Kyle (Chris Evans). It takes some doing, it goes without saying, to cause one to reassess the acting acumen of the Brat Pack.

As Roy, Nam sort of subverts the stereotype that Asians are bookish overachievers by replacing it with the stereotype that Asians are sex-crazed, stoned comic relief (see also: Long Duk Dong)--but it's indicative of The Perfect Score's essential cowardice that it can't quite bring itself to make Roy out at the end to be something short of a computer genius and a standardized test-taking savant. Why Johansson wants to follow-up Ghost World and Lost in Translation with something that forces her to say lines like, "I want to be a mom when I grow up. Not a mother, a mom... Or porn" (quirky, non?) is an issue that she should probably be taking up with her agent, while the insistence of some filmmakers to continue casting actors who are obviously idiots (Christensen) as brilliant students, doctors, and scientists can be viewed either with incredulity or gratefulness that it's the one thing that consistently provides chuckles in otherwise humourless comedies.

Interracial coupling is frowned upon in The Perfect Score as the two pairs of Caucasians in the cast hook up, leaving the black dude and the Asian guy to look at each other uncomfortably. Overloaded with self-conscious dialogue and a wry reference to John Hughes pictures that would be funnier were the comparison not so tragic, the picture, if it does anything, establishes Robbins as our reigning king of cinematic self-delusion, desperately mining for some sort of cheap moral uplift in a tale of juvenile delinquents taking a shot at the "racist and sexist" SATs. Juvenile rebellion used to consist of Rebel Without a Cause, Heathers, Say Anything, and at least bracing garbage like Pump Up the Volume--now it's lifeless dreck like The Perfect Score and whatever new Mandy Moore/Hilary Duff abomination is shambling down the pike. I've seen the future, and all I can say is...go back. Originally published: January 30, 2004.