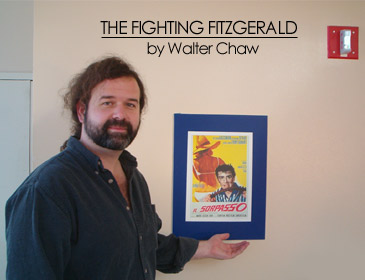 January 25, 2004|An unwritten policy says that before interviewing a new subject for the first time, you should see the film and log the review so that the review isn't flavoured by bias, by whether you love or hate the filmmaker. It's almost impossible, particularly for an inexperienced critic, to separate affection for a person with a more diplomatic look at the person's picture--and difficult as well to separate the persona that an artist presents to media with who the person actually is. Everybody's your friend on the junket and we need each other: I need to fill my column (and hopefully with a compelling face), they need to publicize their films, and we get famous together in our respective disciplines. The whole thing is a little parasitic.

That being said, Canadian filmmaker Thom Fitzgerald gets credit for not trying too hard to be likeable, cultivating an air of smug, bemused superiority that strikes me as genuine mainly because his films exude the same aroma. I've had a few interview subjects claim that they're familiar with my writing, but few have claimed it the way Fitzgerald did: "Oh yes. I'm familiar with your work." I've heard said the bookism that words "dripped" with sarcasm--I'd never known what that meant until then. And yet I wasn't convinced that Fitzgerald was consistently sardonic--it struck me that the filmmaker, Jesus-scruffy in loose-fitting clothes, was often engaged in something like a conscious image construction: the Lone Turk perhaps, the voice of reason in the wilderness. Some are buying, with praise of his vapid The Event and self-satisfied Wild Dogs; I'm not. Fitzgerald is too busy being better than everyone else to make another movie the equal of his flawed but fascinating The Hanging Garden--one of the dangers of reading your own press.

No problem. It's about photographer Shelby Lee Adams and the charges of exploitation in his work.
Ugh. Here we go. (laughs)

Are you sick of the question or sick of your answer?
About Wild Dogs?

You're anticipating the direction I'm going.
I'm thinking you're going to ask me about the ethical quagmire of using physically disabled extras for my film and by way of explanation, let me tell you the whole story. I first went to Romania to shoot a made-for-cable television movie, a Halloween movie, for the USA Network, and it was set in a freak show. In the background we'd cast a lot of people who would really have been performers in a freak show. People with backwards-looking limbs, no limbs, a little man, but it struck me as I was there that their real lives were much more dramatic and heroic and worthy of a more serious exploration in film.

An act of atonement?
No, I didn't feel guilty having these guys employed in a film as performers in a freak show, but I did think that there was so much to their character in real life, to their human character, that it was a real worthwhile endeavour to collaborate with them to bring their stories to the screen. Of course, every day, when people from one culture work in another culture, particularly when it's a wealthy culture and an impoverished culture, issues of exploitation and boundaries are a constant part of the equation. To make sure that the people working are working for the right reasons and are not in any way feeling as though something is taken away from them. So I always make sure that the people we were working with had the right to make decisions and determinations about the film we were making, about how people like them were being portrayed in the film.

You seem weary of the topic, but doesn't your main plot about a western pornographer, played by you, travelling to Romania to find fresh meat demand this very conversation?
I think there's a difference between exploitation and collaboration in that in exploitation someone is taking from someone else and in collaboration, everyone is giving to each other.

So once we dispel the spectre of exploitation, let's talk about objectification in your work--all the way back to Beefcake.
I think the situation of the muscle-magazine photographers in 1950s America, and I think it's something that the film failed to accurately give weight to, is that everyone involved in that circle of the athletic model guild, behind the camera or in front of it, had in common the fact that they lived in the periphery of the American society. It's easy by today's standards to look an artist exploiting young men, taking off their clothes and having sex with them and then sexually circulating the models, but in the context of the time for those men being open about their homosexuality would have resulted in chemical castration and frontal lobotomy. So you can look at it as being underground and sneaky, but when your other choice is having a chunk of your brain taken out, you know, social context is everything.

The Event is set in post-9/11 New York--Wild Dogs set in post-Communist Bucharest. Compare these wastelands.
Well, when society goes through an upheaval, that makes the dramatic stakes for everyone who lives there very high. That's what attracted me to those backgrounds. My second AD, a son of a diplomat who had spent time in America but decided to go back to Romania, said, "In Bucharest the bad people can be very, very bad, and so the good people need to be very, very good." I can't say that the upheaval of 9/11 in New York had anything to do with my setting The Event there.

Forgive me, but you've said that it did.
No, with The Event is was happenstance. We struggled with it a great deal to figure out how to incorporate it into the film. I do remember that we referred to New York as "ground zero" before 9/11, it was ground zero of the AIDS epidemic, you see, so that was the reason that it was so important for me to shoot the movie there.

Instead of San Francisco?
Right--so it was all, the 9/11 thing, a challenge to incorporate it into the film respectfully. 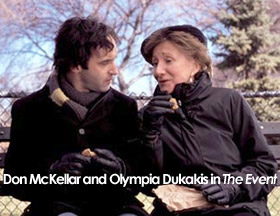 Why did you try to incorporate the event at all if it was incidental to your film?
I integrated the WTC into The Event because I knew I was making a period piece. I was telling a story set in a time and place that changes rapidly--every part of me hoped that it would continue to evolve rapidly and that we'd be looking at the turn of this century and be able to look back and say, "Gosh, remember when they used to prosecute for assisted suicide?"--and all of this would be true in the context of the film. Also, it was a low-budget film, I didn't have two hundred production assistants running around asking New Yorkers to take down their American flags and act like nothing was wrong. Maid in Manhattan? I guess they had the resources to make people forget, but I could not turn my camera on the city without seeing it.

Uh huh.
It's set in the U.S., China, and South Africa so I've been travelling the globe. It's about the different guise of the AIDS epidemic around the world. My thesis is that in a time when all of humanity has this common enemy, how rather than bring us together to fight it, it has actually served to be derisive and resulted in people accusing one another and making it someone else's problem. You know, in North America and Europe we had such a cognitive awareness of how not to spread it, but in China they're spreading it to millions through their blood collection practice. That ignorance is horrific.

No less so than in Romania and Africa.
I was working in South Africa in an area where one in three adults was HIV positive and the government's position was that HIV doesn't, in fact, lead to AIDS. We recreated the manhood ritual, the mass circumcision in this area, with a common machete used among ten or fifteen boys. No thought to sterilization whatsoever. How do you combat that?

Rituals, you use them a lot in your film--base your films around them even. Why?
Hmm. You'll have to clarify.

Weddings. Suicide parties. Birthday parties...
Ahh, right. I think when you're looking at defining characters, it's often how they respond to society's rituals that do the trick. How does a bride fit into a wedding dress? In our culture, frilly and white and virginal, rather not human-looking costume that brides wear. I try to incorporate society's rituals to see who fits in and who doesn't, even into their immediate culture.