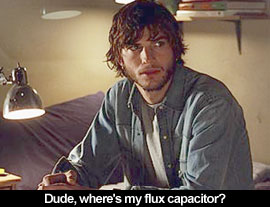 by Walter Chaw The Butterfly Effect is tidy, nifty even, a great little genre picture that wallows in ugliness, child abuse, animal abuse, classism, and misogyny but with a dirty polish that tends to distract a little from the nastiness. Evan (Ashton Kutcher) suffers from blackouts, has ever since he was a kid, and no wonder, as there seems to be some nasty bouts of molestation, baby murder, and dog immolation buried in there, desperately in need of some good old-fashioned repression. Now a psych student at State U (his research having something to do with memory, naturally), he discovers that he can "possess" himself at various stages of his youth after being triggered by the comp book journals he's been keeping ever since he started having his spells. His efforts at "fixing" the tragedies of his life all tend towards failure, however, as every little wrinkle he puts in the fabric of time results in catastrophic changes in the present. The Butterfly Effect owes a great debt, then, to Ray Bradbury's "A Sound of Thunder," Brian Aldiss's "Poor Little Warrior," William Goldman's Control, and Clive Barker's "The Inhuman Condition"; that it manages to honour to some degree each one of its sources (if only with the precision lavished on the telling of its dank tale) identifies the picture as a most difficult beast to embrace--and just as difficult to dislike. The craft above reproach, it's the content that worries.

The constant in Evan's time-hopping is his desire to rescue childhood sweetheart Kayleigh (Amy Smart, played at age 13 by The Royal Tenenbaums' Irene Gorovaia) from a life of unhappiness and privation brought about by a slimeball father (Eric Stoltz) and psychopathic brother Tommy (William Lee Scott). Molested by her dad and abandoned, in effect, by Evan, Kayleigh is a roadside waitress groped by customers and headed for suicide; one temporal twitch later and she's a vacuous sorority girl, and then a scarred-up, strung-out whore. From the first images, an excellent prologue-into-title sequence that ends with Evan scrawling an emphatic "SAVE HER" on a tablet, the object imperilled, the damsel in distress, is never in question. Ultimately, the message that an abusive pedophile of a father generally isn't very good for the future success of his children isn't exactly a bolt from the blue, but the idea that it's not nearly so easy to effect change in their fate save complete excision of the offending parent carries some blunt force in its hopeless single-mindedness. Taking that as a given, it still doesn't forgive the lengths to which the picture has gone to savage its princess grail.

So the challenge with which The Butterfly Effect presents the viewer is to determine whether the film hates women, children, and animals or, almost as troublingly, understands the visceral impact violence towards women, children, and animals elicits in most reasonably well-adjusted humans, and seeks to exploit it. In the one scenario, the picture resents traditionally vulnerable targets; in the other, the picture hates you. Just reading the film as misogynistic is tempting, as it yields a wealth of irrefutable evidence--Kayleigh isn't the only victim of hyphenates J. Mackye Gruber and Eric Bress (their previous cinematic contribution the screenplay for the similarly unpleasant Final Destination 2): also falling under the scythe are a mother and her baby daughter, a sorority house seen in various stages of gratuitous undress, and a goth girlfriend-of-the-goth-roomie cast as gloomy sex-toy in the trend of post-Columbine Goths (see also: Home Room). Conversely, though reading the picture as a thumbscrew for a society interested at almost every level in some sort of misguided do-gooderism doesn't preclude looking at the film as misogynistic, it adds some pithy self-reflexivity to the dead-end of shallow politicism that a certain intellectual do-gooderism encompasses.

The Butterfly Effect plays out as something of a gratifyingly appalling version of the true consequences of Bruce Almighty, though its too-rosy conclusion, the thing that unravels the misanthropic abyss of the picture, submarines the nihilism of what's come before. (Not only is all well in everyone-ville, Evan's terminal condition seems suddenly, inexplicably, cured.) In a sneaky way, though, now and again I got the distinct feeling of watching a genre passion play based on the revelations of Steve James's amazing documentary Stevie: the idea that the best intentions of the privileged class are not only fraught with self-interest and venality, but doomed to abject failure besides. The picture explores the pros and mostly cons of playing God with the lives of the downtrodden--whether we should--and the uncomfortable, almost inhuman, truism that no matter how clear the answers look from the ivory tower, it's probably best to just leave well enough alone. Originally published: January 23, 2004.