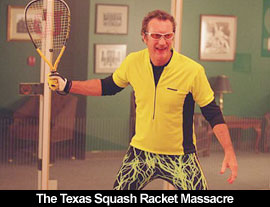 by Walter Chaw A half-baked, underfed comedy of body function that doesn't even manage the wit to successfully honour the threadbare conventions of its idiot slapstick sub-genre, Along Came Polly isn't offensive so much as apocalyptically tiresome. Even at an anaemic eighty-five minutes, the film drags somehow, limping across the finish line with an ass rimshot that isn't funny at the beginning of the picture with Hank Azaria and hasn't gotten any funnier by the end of it with Ben Stiller. How something so indebted to dozens upon dozens of other films can't get the imitation right buggers the imagination, providing a nation of yearning hacks that dulcet feeling of hope that results in a few more horrifically inept screenplays (produced and directed with commensurate incompetence) just like this one probably in the first half of 2004 alone. Bleak doesn't even begin to describe it.

There's Something About Mary without heart, timing, intelligence, freshness, you name it, Along Came Polly casts Mary's leading man Stiller as a risk management professional but doesn't make good on the comic possibilities of his patented hapless stick-in-the-mud shtick. It's not until more than halfway through that there's anything like an intimation that the film will try to work in Stiller's pathological neurosis, and then when it does, greater emphasis is placed on a daredevil Aussie exec (Bryan Brown) trying to get insurance, as well as that time-honoured sitcom device of the hero writing something about the girl he loves that he leaves lying around and will eventually have to try to explain. The only person who leaves anything resembling an impression is Alec Baldwin in another second-banana role (see also: The Cooler, Outside Providence, and Glengarry Glen Ross) that steals the show right out from under Stiller phoning it in, Philip Seymour Hoffman transmogrifying into the ghost of Chris Farley, and Jennifer Aniston (as the titular Polly) doing the best she's capable, poor dear. Aniston made a good choice a couple of years ago with The Good Girl, using her bland sexuality to nice, understated effect. As the wildcard Forces of Nature (which is actually not a bad movie) sexpot, she has the body but not the sizzle.

Checking off a list, there are maybe three substances the human body produces that aren't exploited for cheap laughs during the course of Along Came Polly, fashioning a weird entendre out of its title and providing a little fascination at how a four-year-old's delight in excretion is poised to gross millions of dollars this weekend; ideally, only demographics incapable of buying tickets in the first place (lobotomy subjects, toddlers) will be able to brush off the screaming inadequacies of the picture. It almost seems as though there are whole scenes missing--the ones containing the punchlines, for example. Vast, sucking sinkholes pepper the barren, lunar landscape of all this laziness.

At the heart of it, Along Came Polly just doesn't try very hard. For all its plugged-toilet jokes, blind-ferret gags, and crazy foreigner/homosexual song-and-dance, it isn't at all offensive nor, save the explicit definition of the word, particularly scatological. It's never shocking, never anything more than a chuckle's worth of funny as it struggles to mine some laughs out of how obnoxious the French are (and isn't the mocker unable to let a mediocre joke die the more obnoxious?), and finds another example in Debra Messing (after Sean Hayes's double-gainer in The Cat in the Hat and Pieces of April) that "Will & Grace" owes a lot to Megan Mullally. Tossed off, clearly edited until the last minute, the saddest thing about Along Came Polly is that it was screened for critics in the Denver area and Disney's Teacher's Pet, possibly the one January release worth a damn this year, wasn't. Originally published: January 16, 2004.