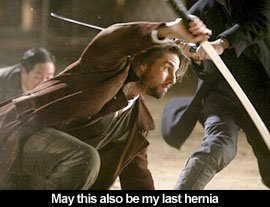 The Last Samurai begins in 1876 as Captain Nathan Algren (Tom Cruise), haunted by his part in the massacre of Native American women and children, is hired by the Japanese government to train their troops in modern warfare by a young emperor (Shichinosuke Nakamura) in love with modernity. The hastily-assembled conscript army woefully unprepared for battle, an abject defeat at the hands of rogue samurai Katsumoto (a commanding performance by Ken Watanabe) leads to Algren's capture and imprisonment in Katsumoto's village, in the home of Taka (Kiyoshi Kurosawa favourite Koyuki), the widow of a man Algren has killed in battle. There's talk of cherry blossoms and a dream of a tiger in a forest.

Small wonder that The Last Samurai reminds of Lawrence of Arabia, since the plot involves a disgraced military officer sent to contact an alien force (that has just raided a railroad) whom he comes to see as noble even as he views himself as their salvation--although Algren ultimately functions not like T.E. Lawrence, but another of Peter O'Toole's roles: Reginald Johnston, tutor to The Last Emperor. Filmed on an epic scale, if The Last Samurai looks like Braveheart, small wonder again as cinematographer John Toll shot both films. And if the idea of a Civil War-era white officer going to battle beside an all-brown army smacks of Glory, well, Zwick also directed Glory. Meanwhile, The Last Samurai lifts the nursing-from-injury/courtship/surrogate father cycle whole from Peter Weir's Witness (an accidental voyeur moment nearly shot-for-shot), marking the piece as over-familiar even as the realization that we are in this film only about 60 years before the Japanese begin their massacre of the Chinese at the onset of WWII provides the piece a sort of ambivalence that compels as the one thing truly its own. Yet over it all lays the equivocation that if The Last Samurai is a film we've seen about a dozen times before, we've at least liked every incarnation to some degree.

Much too long in the fashion of films with awards ambitions, The Last Samurai is handsome, a couple of action sequences are mounted with passion and discretion, and its aspirations toward the poetic in its Japanaphilia are charming for their sincerity. Dances with Wolves another obvious touchstone, the picture depicts Cruise as lovably earnest in the Kevin Costner mold, another limited actor limited to a certain kind of role, but one who seems genuinely interested and invested in his projects. As such, and like Cruise's Minority Report, The Last Samurai is a film of endearing ambition ultimately hamstrung by its need for a hollow, conventional conclusion (that cribs from The Road Warrior, of all things) and a toothy, matinee idol hero, even involved as Cruise seems to be lately in self-mortification and uglification. As macho melodramas go, the film earns points for quoting the fifth century BC Battle of Thermopylae, but loses footing in its elevation of Algren as some Bushido progeny, visualizing a battle with a whispered "no mind" while the phantom of the real deal, Zhang Yimou's astonishingly Zen Hero, lurks in the wings.

On a much smaller scale, Carion's The Girl from Paris concerns the travails of a young computer teacher Sandrine (Mathilde Seigner) as she goes back to agricultural school to prepare for life as a goat farmer and bed & breakfast proprietor. Yearning for a return to a more natural way of life, one that she's never actually experienced (making her nostalgia a curious product of embedded memory in the modern age), Sandrine agrees to buy crusty Adrien's (Michel Serrault) farm, even with Adrien attached for a season as his retirement home is vacated by a temporarily homeless relative. Initially offended by the city mouse's new-fangled ideas, Adrien, after suffering a health scare on a train (!), resolves to pass on his knowledge to Sandrine, a representation of a life lost with the death of his wife and his stillborn daughter.

The Girl from Paris is unusually frank in its depiction of the harsher realities of a rural, subsistence existence. After initial late-summer successes with tours of school children, vacationing hikers, and selling cheese over the Internet ("to Germans" old Gallic Adrien marvels), Sandrine is confronted with the harshness of winter in the French alps, with the difficulties of breeding healthy goat kids, and the reality that a false step in a blizzard could result in a lonesome death. The slaughter of animals for food is depicted with actual footage of livestock in the act of being processed, the juxtaposition of Sandrine's idealization of the Natural with the cold realities of the modern, industrial farm. The picture, in fact, is ultimately less about the troubles that a young woman has in undertaking a difficult challenge (and indeed Sandrine is one of the strongest women characters in film this year) than it is about an old man who understands at the end of his life the importance of the role that he plays in validating others' nostalgia for a romanticized vision of the tragic dreariness of his day-to-day.

Terrified of the encroachment of modernity into their imperfect idylls, The Last Samurai and The Girl from Paris are films at their heart about noble compromise: the only option against the inescapable tide of progress. There is the sense of the inevitable in both, the knowledge that things will never be the same in the worlds of these films even as there is the concurrent sense that the films themselves, static, exist as a timeless monument to doomed longing and unavoidably frustrated hopefulness. But where The Last Samurai tries to conquer melancholy with eleventh-hour speeches, an unbecoming bravado, and a ridiculous epilogue, The Girl from Paris finds its modest victories in a dance to a post-war ditty between an old man who misses the daughter he never knew--and a young woman who identifies the old man as the father of her imagined past. Originally published: December 5, 2003.