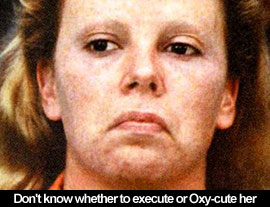 by Walter Chaw As the year winds down and distributors great and small try to cram their films into rotation for possible awards consideration, the truism that there are just as many mediocre foreign and independent films as mainstream ones proves sage for a quartet of minor releases. Lynn Hershman-Leeson chimes in with Teknolust, another of her riffs on Derek Jarman, this one obsessed with Tilda Swinton and eternity through technology. Fatih Akin's second film In July (Im Juli.) is essentially a German The Sure Thing with elements of After Hours, obsessed with eternity through an immortal beloved lit by the nimbus of various suns. One-time Oscar-winner István Szabó offers Taking Sides, a morality tale plucked half-formed from the stage, questioning the eternity of art against the requirements of morality. And Patty Jenkins weighs in with Monster, this year's Boys Don't Cry; it's vérité as lower-class urban ugly, with Charlize Theron seeking eternity through a performance that breaks her out of her starlet mold, Halle Berry-style. Only time will tell if any of it keeps.

The question of eternity is an interesting one to ponder around the often-difficult holiday season--difficult for the way that it serves as a pure conduit to specific memory and, more, a direct line to a feeling of hope, and interesting because independent cinema tends to pose existential questions on purpose. So whether it's a matter of cloning, of art, or, let's face it, of true love, it all boils down to a kind of shambling half-lit progeny that turns its gaze inward upon its medium, itself a lunar art projected in flickering snapshots against a blank screen. The level to which each of these films succeeds in examining the will to power, the drive to continuance, depends a great deal on the extent that each picture is willing to embrace the meta-read of itself as unnatural progeny--and the extent to which each film avoids a pretentious self-consciousness in its knowing.

Teknolust finds Swinton as Rosetta Stone (Swinton), the creator of three clones of herself: seductress Ruby, drooping Olive, and icy Marianne. Her name identifying her as a catalyst to understanding, Stone's clones lack that crucial masculine element, leading Ruby to venture into the real world, collecting used condoms after perfunctory cuddles and stewing them in teacups to replenish her cyber-sisters. Intriguing to say the least, the premise serves mainly as a platform for camp and leaden post-feminist/sexual identity philosophy that, for all the shots at universality, wash out as something peculiarly San Francisco-regional. Swinton continues to be an artist of courage and Karen Black (as a conspiracy theorist named Dirty Dick) brings that ineffable Karen Black kitsch vibe to a picture of stunning production design. Not as conspicuously arid as Hershman-Leeson's Conceiving Ada, Teknolust is clumsy, no question, but perhaps understandably burdened by its sprawling ambition.

Less ambitious in its reach, In July returns the romantic comedy to a respectable discourse with its tale of physics teacher Daniel (Moritz Bleibtreu) following the sunburst on his gypsy ring to true love. A road trip that opens in Germany and ends in Turkey, the picture plays with Yankee stereotypes of Bavarians as glowering and harsh, offering what is possibly the airiest picture of the season. It's this year's Jump Tomorrow, telling an affecting love story (Daniel travels to Istanbul to find his image of a lady love, a real lady love, July (lovely Christiane Paul) his accidental companion) flavoured periodically with touches of magical realism, the best of them a seduction in which Daniel is made, literally, a puppet. A nice commentary in the margins about a coming-together of the German and Turkish communities, In July explodes with hope and good will, paying tribute to Georges Méliès and the persistence of cinematic magic along the way.

Less successful in its approach, Taking Sides tackles all of the weight of the Holocaust in recounting the trial of Berlin Philharmonic conductor Wilhelm Furtwängler (Stellan Skarsgård), accused of siding with der Fuhrer during WWII. The chief inquisitor is Yankee Major Steve Arnold (Harvey Keitel), and the exchanges between the antagonists exist in the over-written, claustrophobic confines of the Ronald Harwood stage play upon which the film is based. Reminding at once of A Few Good Men (another film hamstrung by a too-faithful allegiance to its stage roots) and the maxim that Keitel needs a firm director to defuse his tendency toward ham, Taking Sides' heart is in the right place, but too much feels like narrative contrivance, such as a budding romance between assistant Lt. Wells (Bleibtreu again) and secretary Emmi Straube (Birgit Minichmayr). Between the lines, however, there remain a few fascinating ideas that ping off the central conceit of eternity vs. the demands of the moment, marking the picture as thoughtful (without question) but emotionally barren.

And then there's Monster, an aggressively mediocre film in nearly every aspect. The interesting thing about Theron and Jenkins's take on the strange life and times of executed murderer (and alleged first female serial killer) Aileen Wournos is the lengths to which Theron has gone to obscure her matinee idol looks beneath an extra thirty pounds or so, fright teeth, and face-drooping makeup. As performances go, Theron's vacillates between courageous and drag-king campy, allowing the camera to catch her at her most unbecoming in one moment, and reminding unfortunately of Michael Keaton's obnoxious strutting in Beetlejuice in the next. The problem with Monster is the inescapable knowledge that the picture seeks to justify (to an extent) prostitution and John-murder while excoriating a patriarchal social structure that ostensibly forces both upon our heroine. An addition of a love interest in Selby Wall (Christina Ricci) adds to the loaded brew, with Wournos taking on the paterfamilias role, seeking by any means necessary to provide for the wheedling, grasping Wall and, it's suggested, finally offering up the ultimate sacrifice for true love.

Once we're aware of the lengths to which Theron has gone to deliver her Wournos impersonation, the question becomes one of how much we believe that Theron has done this out of love or out of knowledge of impact. And what difference does it make? Struggling with intentionality inevitably clouds criticism of the work, if in no other way than to distract from the piece at key moments. Monster, then, for what it's worth, seems amateurish and obvious. Produced just a year or so after the Florida execution of Wournos, it even has the misfortune of smelling a little like a shake-and-bake production piggybacking on a sensational current event. That being said, of all the films discussed herein, Monster remains the most productively enigmatic, dredging up questions of art and the artist in tension (and the individual and gender identity) with more urgency than the others. (Even Taking Sides inserts the scourge of sexual jealousy in a subplot involving Maj. Arnold and Lt. Wells.) Monster presents something of a (poetically) flaccid, scattershot exclamation point for the calendar year 2003 that saw its best and worst films stricken by ennui, personal confusion, and a collective bedrock hopelessly in flux. Originally published: December 25, 2003.