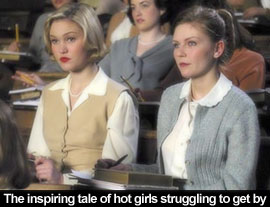 by Walter Chaw Julia Roberts films, by and large, seem to hate men. In a real way, her pictures are as objectionable as those films regularly pilloried for objectifying women (and those like the unforgivable Love Actually that somehow slip under the radar for doing the same), functioning as something of a reactionary version of feminism that seeks to denigrate the opposite gender as the sole means toward gender equality. The big secret about films like Mona Lisa Smile is that they're every bit the big-budget Hollywood spectacle film derided by a goodly portion of its audience as puerile, predictable, and thematically reprehensible. Because Mona Lisa Smile is so much the child of formula, it's difficult to muster much energy in condemning the film by itself--by itself, after all, it's handsomely mounted and well-performed. But as a symptom of that facile societal desire for superficial uplifts and comforting negative stereotypes, the smoothness of the coating for this bitter pill deserves some measure of profound distaste.

Katherine Watson (Roberts) falls down, falls in love, brays her guffaw, and bares her teeth. Because Mona Lisa Smile is Dead Poets Society with women, it's set in an exclusive same-gendered school in a sepia Fifties past where lockstep cardboard student types get a moment in the sun before succumbing to the role of helpmeet for the bohemian professor, too good for the best and too young to die. It isn't that professor Watson teaches them something, of course, it's that her button-down-turned-day-seizing students teach professor Watson something about herself. The mean one is Betty (Kirsten Dunst), the promiscuous one is Giselle (Maggie Gyllenhaal), the plain one is Constance (the very pretty Ginnifer Goodwin), and the brilliant one is Joan (Julia Stiles)--one gets unhappily married, one gets happily married, one gets sad over an ill-conceived dalliance, and one gets a shot at happiness against all odds (because she's "ugly"); when the film deposits them in a secret society where libations are indulged and secrets spilled, what begins as tedious becomes a death march. One that, perhaps to its credit, doesn't end with the students applauding while standing on their desks, but rather the students weeping while offering a fleeing taxicab the year's stupidest bicycle posse.

In her second such turn of the year in a distaff ensemble film (both written and directed by men; the other, Casa de Los Babys, also with Gyllenhaal), Marcia Gay Harden appears as some sort of fruitcake and walks away with the film as the most interesting fabrication in director Mike Newell's dyspeptic fabulism. Easy shots at the stodginess of 1950s schools join easy shots at the popular conception of women fifty years ago as homemakers, all while the paranoia of a culture trying to come to terms with new women's roles post-Rosie the Riveter (film noir, n'est pas?) is passed over completely. In the place of a genuine dialogue on the subject of a vertiginous period in gender politics in the United States is a fruitless discussion of the titular Mona Lisa Smile, placing women, The Hours-like, in some sort of inscrutable ocean of secrets (cribbing Titanic, another film, as it happens, that features a revisionist femme recognizing the importance of Picasso): troubled waters looking for bridges and objets d'art in need of deconstruction.

The picture is one half waiting for Watson to inevitably win over her students, one half waiting for Watson to become a noble martyr to her overwhelming decency. A reference to "I Love Lucy" precedes a trademark Roberts Lovable Pratfall, and phrases like "independence frightens them" and discussions of the veracity of art send the more self-aware among us casting meaningful sidelong glances at each other. The irony of the situation is that in a film determined to mete out its ire on an institution that quashes individualism and imagination is itself a product of the same: a film made in an era where the star has never had more power, that spends the whole of its running time in the active squandering of that power on a shrine of the tired contrivances that have made Roberts a star. Its conclusion, then, after a start that's if not strong then at least not weak, is condescending capitulation at its most mercenary.

Unlikely scenarios (including the central love story) are established just to be rebuked in matinee idol moments (and the scene in which Watson finally dumps cad Bill (Dominic West) is an inexplicable graft from Dying Young), and by the end of Mona Lisa Smile the only thing curious is how the picture manages to cast all men as either philandering jerks or ciphers with dicks, while all subplots (one of them concerning philandering Giselle) are summarily dropped just as they threaten to provide the piece with something like depth and humanity. A phoney film mustering crocodile outrage for confused manifestos (women shouldn't go to college just to get married--unless they want to) and an undeserving heroine going through the motions, Mona Lisa Smile isn't as enigmatic as its titular ho-hum metaphor so much as its commercial intentions are crystal clear. It's not a smile, it's a smirk, and it's predatory. Originally published: December 19, 2003.