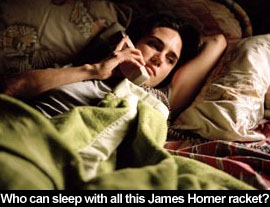 by Walter Chaw Based on an award-winning novel by Andres Dubus III, son of Canadian novelist and short-story writer Andre Dubus, Vadim Perelman's hyphenate debut House of Sand and Fog is difficult to gauge on its own merits, given that the typically invasive grandiosity of another abominable James Horner score sinks the picture almost by itself. With no moment uncommented-upon by Horner's bank of weeping violins and no lovely Roger Deakins tableau unmarred by Horner's insatiable taste for schmaltz, the picture is a prime example of two things: the prestige picture/Oscar grab; and the film of grand emotions that decides to trust its composer over its cast and screenplay. The similarities between House of Sand and Fog and In the Bedroom (a film based on Dubus Sr.'s short story "Killings") are obvious, but where the latter allows its cast to breathe, House of Sand and Fog smothers Ben Kingsley and Jennifer Connelly in a fatal dose of Horner's saccharine ministrations. In Horner's defense, however, the extended climax during which a vein-popping Kingsley is allowed too much rein is awful without help.

Kathy (Connelly, breathtaking) is a mordant, depressive young woman living in her inherited house and neglecting to open her mail. When the county forecloses on her house and auctions it to Behrani (Kingsley), a former military Colonel in Iran working two blue-collar jobs to keep his family (wife Naderah (Shohreh Aghdashloo) and son Esmail (Jonny Ahdout)) in the high cotton, Kathy finds herself homeless and the wilting ward/mistress of wooden deputy Lester Burdon (Ron Eldard. House of Sand and Fog is more about that growing feeling in the United States of ennui and nihilism, focusing, like Gus Van Sant's astonishing Elephant, on the Yeats-ian idea that bad things happen because good people fail to--are unable to--act. Kathy is the prototype for that unique Yankee malaise: white collar (her job as housekeeper seems more from a lack of impetus than a lack of opportunity) and lazy, afflicted by what Behrani identifies as "the eyes of a child, always looking for easy comfort and a sweet taste in the mouth." A recovering alcoholic, her fall off the wagon is predicted by the picture's idiotic framing device, while her inability to take action (Kathy spends much of the film lying disconsolately in bed or bath) anchors the picture's thematic concerns. As social exposé, House of Sand and Fog plays an awful lot like bodice-ripping melodrama, complete with semi-torrid love affair and parallel storylines that don't so much echo one another ironically as ping off one another discordantly.

What fails about the exercise is the idea that Behrani and his family are made to be the noble image of the hard-working immigrant, that last bastion of the American Dream, and the memory of the values of a community unencumbered by a sense of entitlement. Dramatic counterweights and doublings are without question tried and true literary devices, but they work better as subtext than as narrative. The strength of the film's idea of the self-esteem nation's virulence spreading itself as terminal languor amongst the advantaged and the beautiful lies fallow while Horner's excrescent music transforms something thoughtful and sad into something dispiriting and repugnant. (Compare it to Arvo Part's minimalist score to Elephant and how it magnifies that film instead of aggrandizing itself.) I suspect that Connelly delivers a pretty fine performance (hers and Aghdashloo's the highlights of House of Sand and Fog), and I suspect that Kingsley overdoes it and Eldard underdoes it, though without one moment left unfellated by Horner's sloppy kisser of a score, it's sort of hard to tell. Originally published: December 19, 2003.