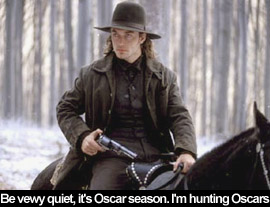 Ada (Kidman) is the preacher's (Sutherland) daughter, dragged to the titular small North Carolina town from her life of privilege, where she promptly falls in love with Inman (Jude Law), a carpenter--just like Jesus--who happens to be named after a riff on Odysseus' "no man." So the twin allegories driving the material are established pretty early, Christian charity and one man's quest to return home to his woman, all in the hard candy shell of an airless romance sparkling with the veneer of mainstream dispensation. Once dad dies in a rainstorm (natch), Ada gets attacked by a rooster and enters into a partnership with homespun urchin Ruby Thewes (Zellweger), whose every entrance is scored by a blast of cornball banjo. Meanwhile, Inman deserts and begins his perilous journey home, confirming his saintliness about a dozen times along the way.

Films that open with piano music and mournful voiceovers (see also: Beyond Borders) tend to set the stage for over-scripted, over-scored exercises hamstrung by elaborate framing devices and self-conscious performances designed to draw attention to themselves. Cold Mountain looks beautiful: DP John Seale, best in the snow, creates landscapes as sharp and brilliant as the film's pacing and direction is not--not a surprise when looking at Minghella's oeuvre, though a considerable surprise when considering genius editor Walter Murch's. The look of the film is important given that the antagonist of Frazier's Cold Mountain is the inevitability of natural rhythms (the seasons as metaphor for the violent undercurrents that drive men to lust and to war). Cold Mountain isn't The Thin Red Line (without a threatening Nature there's actually no conflict in the piece)--what's poised at the precipice of a nation in tumult is by the end neither a compelling, convincing romantic adventure, nor a pithy comment on perseverance in a time of uncertain destiny.

Cold Mountain's thematic hollowness is brought into eloquent focus not so much by a familiarity with its source material, but by a pair of moments that point to what the film might have been in coarser hands: Inman being nursed back to health by an old woman (Eileen Atkins) at the apex of a fairytale hillock and his encounter with a grieving war bride (Natalie Portman) express with a piquant desperation what countless stifling exchanges between its principals can't seem to muster. Both sequences (and it bears mentioning that the film is a series of barely-connected sequences) recognize the importance of cycles in the lives of individuals--an overriding philosophy that puts hardship into perspective and provides an agitated insight into the plight of man in eternal conflict with his acts and the inexorable pulse of nature that compels them. Rather than challenge with its ideas, Cold Mountain favours epic romance and movie-star postures, making it a failure for its success. Originally published: December 25, 2003.