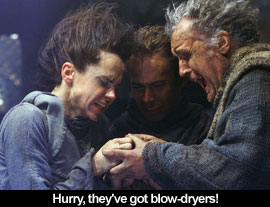 by Walter Chaw So it's come to this: "Renaissance Fair: The Movie." A costume thriller based on another terrible Michael Crichton potboiler, Timeline isn't so much disinterested in plausibility as it is interested in pitching itself to the stupidest kid in class. It takes pains to bring along a guy fluent in French on its time travel adventure to fourteenth century France when it would have behooved them to find someone fluent in Middle French or, for that matter, Middle English. Guys weren't talking like Black Adder in 1357, they were talking like Chaucer, and what bothers me isn't that the filmmakers either don't know or don't care about that, but that they've taken pains to illogically address the language barrier, this happy group of time-tripping scientists, and the filmmakers are confident that no one stupid enough to buy a ticket for this film will know the difference. On second thought, they may have a point there.

Professor Johnston (Billy Connolly) is a Scots caricature of a man, all "ach aye" this and "fer fooks sake" that in lieu of any actual dialogue. After modeling Heineken with the rest of the idiot cast before running off to bohunk desert America and getting shot back in time, his plastic son Chris (Paul Walker) and students André (Gerard Butler), dead-eyed Kate (Frances O'Connor), and sacrificial frog François (Rossif Sutherland, brother of Kiefer) come rushing helter skelter after, bringing with them only a set of magic time travel medallions and arbitrary rules. (Don't use the medallions with anything within a forty-foot radius! No modern weaponry! Don't violate the Prime Directive!) Along for the mission of mercy is a marine or something (Neal McDonough) and a pair of unnamed Star Trek ensigns who get themselves killed in almost no time flat.

Because for whatever reason director Richard Donner and DP Caleb Deschanel can't make this $80M movie not look like an episode of "Voyagers", Timeline is not only deeply stupid and legendarily boring, it's also ugly and insipid. Paul Walker is still the worst actor in the United States (and in the history of the United States), Frances O'Connor still can't act in a Yankee accent (and why bother in this scenario?), and Gerard Butler and Marton Csokas are still having a tough time convincing me that they're two separate people. Jeff Maguire and George Nolfi's screenplay is fascinatingly undeliverable, opening with a prologue that asks a lot of questions that remain unanswered while transplanting bits and pieces of the Crichton novel (itself no model of structure) willy-nilly with the hope, I suppose, that sense will erupt by some combination of serendipity and mule's luck. All that erupts is an almost constant stream of sewage like, "Hurry, there's no time," and, "You're history," and, in the picture's worst moment, "For France!"

In the middle of wondering why no one's thought of the problems of introducing modern people to old diseases and ancient people to new diseases, I realized that punching holes in Timeline is one of those onanistic pastimes priests warn about. The film is a colossal waste of time, making it a time machine of sorts itself by transporting audiences two hours into the future with no measurable ripple in consciousness. On the bright side, Timeline is as good an argument as any to bring back "Mystery Science Theater 3000"--not that making fun of it is all that challenging. Originally published: November 26, 2003.