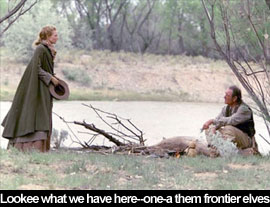 by Walter Chaw Probably best described as Ron Howard's The Searchers, the really quite awful The Missing (the first clue is a James Horner score) and its tale of bad Indians vs. sacrificial Indians vs. white settlers unfolds during a frontier period that, the last time Howard dabbled, unleashed Far and Away. With Horner's help, Howard proves with The Missing that there's no source material too bleak (not schizophrenia, not reality television, not space mishaps) for him to shine his dimwitted, beatific smile upon. He transforms Thomas Eidson's bleak frontier western (The Last Ride) into a curious sort of faux-feminist uplift melodrama ("Mildred Pierce, Medicine Woman"), demonstrating, along the way, that he has no idea what issues he's raising, much less any idea how to honour them.

Maggie (Cate Blanchett) is a "healer" living in sin with one of her cattle hands, Brake (Aaron Eckhart), and her two daughters, wilful Lily (Evan Rachel Wood) and spunky Dot (Jenna Boyd, turning in the film's best performance), in 1885 New Mexico. Their lives are turned all topsy-turvy-like by the appearance of Sam Jones (Tommy Lee Jones), a stoic, long-haired drifter fluent in Spanish and several Native American dialects and, concurrently, familiar with the abduction of Lily and the murder of Brake by a band of Apache scouts looking to sell some girls south of the border. Before you can say "Ethan Edwards," Maggie sort of reconciles with Sam, who turns out to be Maggie's estranged father, and the two, Dot in tow, embark on a quest to save the purloined lass.

Blanchett's shtick has regressed between this and Veronica Guerin into a series of desperate eyebrow waggles while Jones continues his late career devolution from tracker (The Fugitive, U.S. Marshals) to ex-tracker/werewolf (The Hunted) to aimless drifter with an Indian name of "Shit for Luck" (The Missing). If only luck had anything to do with Jones's film choices since Cobb almost a decade ago. So, the performances are weak, the script is a hollow send-up of The Searchers (sans tension) and Hombre (sans conflict), and, with the exception of one scene on some white sands mountains that recalls the opening escape of One-Eyed Jacks, the cinematography is either backlit, underlit, or mock-grand in the populist Ron Howard style.

A combination of an Oscar-grab and a Pollyannaish filmmaker trying out the "gritty" mantle, The Missing is safe entertainment for the timid; an adventure film for the unadventurous; and an art film for stupid people, with its leaden symbolism of spilled milk and blown-out lanterns. The idea of superstition--treated with more professionalism and skill in Master and Commander: The Far Side of the World--is handled here with a sort of antsy earnestness that becomes condescension as soon as Sam gratefully accepts a crucifix. The Missing's moments of courage are all treated this roughly, in fact, dangling the carrot of genuine respectability before some ass snatches it away with an easy solution, a rousing violin swell, or a shoot-'em-up climax implausible (and debunked repeatedly by the film itself) and irritating for the neatness of it. Not a disappointment since expectations were low, The Missing is a long walk along the scenic route--an etherized drama unfolding in a postcard past with cardboard characters. A Ron Howard film, in other words, with its chief selling point that it's not quite as boring as Apollo 13. Originally published: November 21, 2003.