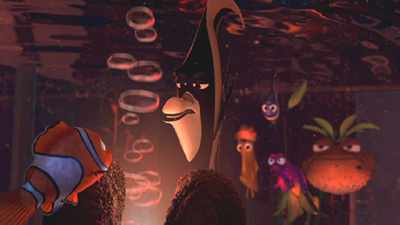 by Walter Chaw The perfect American parable for an anxious new millennium, Andrew Stanton's Finding Nemo is riddled with nightmares and weighted by the existential smallness of its heroic pair, finding a certain immutable gravity in the fear and hope represented by children, rekindled, both, by the spate of child-on-child violence ending our last thousand years. Following hot on horror films that, like the horror films of the late-'60s/early-'70s, focus on unapologetically evil children (then: Night of the Living Dead, Rosemary's Baby, Don't Look Now, The Exorcist, now: The Ring, Identity, Soft for Digging), what Finding Nemo does is present generational paranoia from a parent's point of view, opening as it does with an act of senseless, heartbreaking violence in the middle of an idyllic suburbia. It's not the horror (at this point) of a child facing social ostracism in the school environment, but the horror of making a choice to escape a bad environment only to find oneself in the middle of an upper middle-class tinder pile about to light.

Marlin (voice by Albert Brooks) is a single father raising a physically challenged child, Nemo (Alexander Gould), in a dangerous environment that has already claimed his wife and other kids. When Nemo is kidnapped on the first day of school, Marlin and his mentally disabled friend, Dory (Ellen DeGeneres), embark on a journey across the world that Marlin fears (often for good reason) to find his son. Finding Nemo crosscuts between Marlin and Dory in the sea and Nemo in a tank in a dentist's office. Where the one environment is rendered with a spooky infinity, the other is claustrophobic and melancholy--one representing a parent's anxiety as vast and unknowable, the other an over-protected child's life of paranoid banality. That the tank is in a dentist's office adds a level of (comic) anxiety to the Nemo segments of the film, demonstrating a subtle knowledge that the picture is something of a relentless chronicle of modern disquiet, one relieved at regular intervals by clever sight gags and the sort of dark wit that mines a demented soul's (Vicki Lewis) belief that her reflection is her twin sister.

The picture is visually beautiful and thematically terrifying, a dark fairy-tale that balances its moments of wry hilarity with an incisive social eye that formulates the American zeitgeist in all its neurosis and pathology. Finding Nemo is as exciting a mainstream film as any in years for its uncompromising darkness and its ability to balance the archetypical with the contemporary (resembling The Royal Tenenbaums in this respect). A bit of fear essential in any successful children's entertainment, the triumph of the film is that it avoids the conventional villain, replacing it with flawed heroes in a world governed by chaos (a school of deadly jellyfish, a creepy angler fish) and decay (a minefield and submarine graveyard).

Finding Nemo isn't about good triumphing over evil, but friendship and family triumphing over meaninglessness and the ever-encroaching tide of entropy and displacement. (Dory says, in one line of many seemingly out of place in a children's film made in the United States: "When I see you...I see home."). The picture is very much a bookmark for a culture first shaken by school-shootings, then by devastating terrorist attack, then by economic recession, reflecting with unerring humanity our fears and our dreams of betterment while drawing a line, pure and lyrical, to the fears of our fathers and their fathers and so on down into the chasm of our collective memory. Finding Nemo is a great film for its timeliness, and a greater film for its timelessness.

THE DVD
by Bill Chambers What a great quarter for DVD this has been. I'm not alluding to bells and whistles (though Willard's extras are sublime), but rather bar-raising transfers that relieve us early adopters of some of the jadedness we'd begun to feel about the format's reliable standards. Between The Matrix Reloaded, Terminator 3: Rise of the Machines, The Lion King, Indiana Jones, X2 (review forthcoming--let's just say it's a beaut), and, the topic of the hour, Finding Nemo, home-theatre enthusiasts are getting a new lease on their equipment, and dilettantes are being reborn as techies as the Digital Versatile Disc inches closer to its absolute potential. Finding Nemo is the best-looking DVD of an animated film (CGI or otherwise) to date--the 1.78:1 anamorphic and (superfluous) recomposed presentations--on separate discs within the same package--achieve the feeling that we're getting a direct feed from the Pixar mainframe. The digital-to-digital, THX-certified image is ludicrously tactile; the decision to separate the widescreen and fullscreen versions impedes the gauziness that over-softened the look of Monsters, Inc. on DVD. I was also, predictably, brought to drool by Gary Rydstrom's sound design, reproduced here in Dolby Digital 5.1 EX. Although parent company Disney long ago embraced DTS for home video releases, Pixar apparently won't--yet one would be hard-pressed to spot room for improvement in Finding Nemo's mix as heard here. Of all the pyrotechnics, however, my favourite aural flourish in the film occurs when Darla taps on the aquarium glass, an innocuous gesture that registers in the subwoofer with all the heft of a Godzilla footstep and then some.

Special features are spread out fairly evenly across the two platters; I personally preferred Disc 1's content, subtitled "A Plunge Into the Filmmakers' World" on the back of the slipcase. A first for Pixar, the menu screens provide to-the-second running times for each of the video-based features, which hit the ground running with a 1-minute "Introduction" to the film and DVD from co-directors Andrew Stanton and Lee Unkrich, who drag John Lasseter into the shot to prove they're at Pixar. Rick Butler's "Making Nemo" (26 mins.) marks another Pixar first, since never before had a documentary crew followed the development of one of their productions from Zero Day. The result is winsome and eye-opening--at last, the film's "director of photography" credit (awarded to Sharon Calahan) makes sense to we plebeians, and there's a great split-screen segment comparing ocean footage to Pixar's attempts to replicate it that verifies Stanton's claim that he couldn't tell the difference.

During the widescreen Finding Nemo, you can activate an engaging "Visual Commentary" that leapfrogs every couple of minutes to a rough-stage deleted scene (seven in total) or piece of Finding Nemo arcana; all 31 minutes of this ephemera is also accessible to impatient viewers (like yours truly) via an appendix. Perhaps the most revealing item of interest is an elided prologue that took the edge off the opening massacre by placing Finding Nemo in the realm of bedtime stories. A moving tribute to the late Glenn McQueen caps this section, while four huge "Design Galleries" ("Art Review" (a 9-minute animated slideshow--with either optional commentary by art director Ralph Eggleston, character designer Ricky Nierva, and shading art director Robin Cooper or a music-only track--that boils the coffee table book The Art of Finding Nemo down to its essential pages), "Character," "Environment," and "Color Script" (Eggleston's in-house guide to the movie's fluctuating palette)), seven "Virtual Aquarium" options (I found the jellyfish loop intensely hypnotic), and the THX Optimizer finish out Disc 1.

Disc 2 panders to--er, is geared towards--children, hence the fullscreen transfer. (Second verse, same as the first: it's only parents who whine at letterboxing, ergo the frequent "family" label on panning-and-scanning.) The altered version of Pixar's very funny 1989 short Knick Knack (4 mins.) is here (what's more offensive: the idea that big breasts are automatically raunchy, or the idea that they're something to be sandblasted?), as is an "Exploring the Reef" featurette (7 mins.) in which Dory and Marlin (voiced once again by Ellen DeGeneres and Albert Brooks) intrude semi-successfully upon a tour of the Coral Reef narrated by Jean-Michel Cousteau.

"Mr. Ray's Encyclopedia" is an interactive guide to the fish portrayed in Finding Nemo, who are listed by character name as opposed to species type; "Fisharades" is the rare set-top DVD game that accommodates two players; and "Storytime" condenses Finding Nemo to a read-along adventure for the wee ones. "Behind the Scenes" character interviews (2 mins.) and a mildly cute studio tour (6 mins.) hosted by Nemo himself Alexander Gould round out the set, not counting another 1-minute Stanton/Unkrich intro plus four additional virtual aquarium views and a publicity gallery containing a quartet of Finding Nemo trailers, three "Fishy Facts" Finding Nemo commercials, numerous clickable posters, billboards, lobby cards, and bus shelter displays, and trailers for next winter's The Incredibles (a Pixar flick helmed by interloper Brad Bird (The Iron Giant)), Home on the Range, The Lion King 1.5, and The Santa Clause 2. Consider this a stupendous single-disc title that comes with a free coaster. Originally published: November 3, 2003.