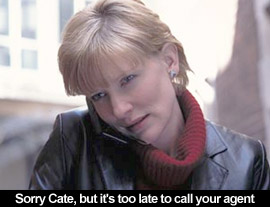 by Walter Chaw By the end of the piece, the only thing missing is John Wayne in ill-fitting Centurion garb, drawling "I do believe she truly was the son of God" over the corpse of slain journalist Veronica Guerin (Cate Blanchett), so at pains is Joel Schumacher's tedious spectacle of a hagiography of Guerin to paint her as some sort of sainted martyr. Veronica Guerin is horrible, really, a passel of forced dramatic slow push-ins framing Blanchett's mannered performance (in a Princess Diana haircut, no less, to really ramp up that pathos) all of insouciantly arched eyebrows and saucy eyeballs and centred dead and soft-lit like a Giotto effigy. Much is made of Guerin's print peers looking down on her, then a closing title card offers a statistic on the number of journalists killed in the line of duty, the suggestion being that journalists are sniffy elitists who don't like someone who can't write, has no background or experience in journalism, and takes unnecessary risks with themselves and their families--and that journalists are heroes regularly martyred by their thirst for truth. You really can't have it both ways, and that lack of focus isn't ambiguity so much as confusion brought about by a mortal dose of self-righteousness.

Veronica takes it upon herself to rub elbows with the superstars of the Dublin underground: an animalistic Martin Cahill (Gerry O'Brien), a terrifying John Gilligan (Gerard McSorley), and a reptilian John Traynor (Ciarán Hinds). John Boorman's The General beautifully covers the life of Cahill with a kind of lilting poetry that makes the fact that heavy-footed Veronica Guerin chooses to begin and end in the same way (with the death of the titular protagonist) something hilarious in a way only truly pathetic spectacles can be. Soon, Veronica is gaining fame for exposing the horrors of Dublin's inner-city heroin problem even as she's attracting unwanted attention from crime lords and hitmen until, finally, her never-in-question death results in the sort of attention to the problem that her journalism never could.

Sort of an Irish Erin Brockovich bloated with sarcastic glances from beneath immaculate bangs, Veronica Guerin begins with an interminable series of title cards and ends with a bizarre eulogy narrated by a voice that doesn't belong to anyone introduced in the film as a character. The film has absolutely no idea how to tell its story and so it tells it off cue cards--the introduction and epilogue are only the most obvious examples of that desperation. Schumacher is fond of old women peeking out from behind trembling curtains and little children playing junkie with needles they find in the street, his brand of jittery washed-out vérité as inorganic as the film's skip-needle pace and narrative. Less a thoughtful biography than a greatest hits compendium, there isn't room in the picture for Blanchett to develop the Guerin character beyond the suffocating strictures of an infallible soul who blunders her way to pyrrhic immortality. The husband and child are afterthoughts or used for pathos, sort of a loathsome strategy for provoking emotional response, no question, but a useful one in that it causes the thoughtful to consider to what extent Veronica Guerin is creatively reconstructing Guerin's life as an "Oxygen" Channel movie of the week.

Without offering us anything like insight into the machinery of the drug trade, the actual impact of said trade beyond a few stock establishing shots, and the efficacy of Guerin's work vs. her death beyond what the title cards and voice-overs tell us, the picture is populist garbage plucking carrion off the dead horses of famous tragedies and inarguable platforms. Guerin was an irritating investigative reporter and heroin is bad for society, and that's not the basis for a film--it's the basis for a public service announcement against drugs and journalism. Easier to say that Veronica Guerin is fairly typical Schumacher fare in that it looks okay in an over-processed sort of way, tackles middlebrow concerns with a middlebrow squeamishness, and sucks. Originally published: October 17, 2003.