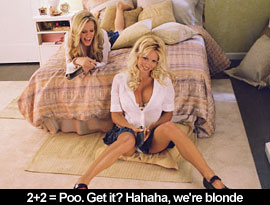 by Walter Chaw Even without the Wayans Brothers, the latest Scary Movie sequel is unspeakably bad. A disjointed series of set-piece recreations from popular films (Signs, The Matrix Reloaded, The Ring, 8 Mile) populated by idiots and scripted with a flat collection of obvious fall-down gags and scatology, the picture doesn't even respect the movies it mocks enough to understand what it is about them that fails. More, with the absence of the Wayans (who are replaced by David Zucker, one-third of the braintrust behind successful spoofs like Airplane! and The Naked Gun), the repeated shout-outs to heroes of hip-hop (an entire record label shows up in cameo bits) and attendant disrespect of the culture land with disturbing racial undertones. The film is aimed specifically at an African-American demographic: That's one thing when the filmmakers are African-American, another thing altogether when they're not.

The continuing character in the Scary Movie films is dumb Cindy (Anna Faris), a television reporter this time around convinced that mysterious crop circles at the farm of Tom Logan (Charlie Sheen) have something to do with a cursed videotape. A cheap shot at the Catholic Church is taken and missed somehow, and eleventh-hour edits yank out entire scenes from the trailer before rearranging the rest of the mess in some random assortment of groin kicks, necrophilia, and child abuse. No worse than Bad Boys II, then, what distinguishes Scary Movie 3 is that it believes that it's being funny instead of cool. Puerility beside the point, the picture is atrociously timed and tedious, the jokes repetitive and lacking in invention. It's the school of "duh" for the exact audience stupid enough to go to it--including Kevin Smith fans, who may have noticed that the Jersey boy's name is on the script and listed among the executive producers.

What disturbs most about Scary Movie 3, tedium aside, is the belief that good roles are just waiting for Jenny McCarthy and Pamela Anderson, that comedy is easy, and that satire is the same thing as hatred. Movies that hate movies are a curious thing, self-abnegating creatures involved in the process of whittling away at their own reason for existence to the point where the audience is forced to agree that there is, in fact, no point to the whole mess. Smith's own Jay and Silent Bob Strike Back is of that ilk: an inward-looking piece of garbage that boasted as its tagline "Hollywood had it coming." No, it didn't--and more, neither did the audience have it coming. A celebration of bad filmmaking and extreme cluelessness (and an unbecoming squeamishness to justify a PG-13 rating (at least the other Scary Movies were hard-Rs)), Scary Movie 3 is a waste of life and cash that will, in all likelihood, make enough to justify a fourth instalment. Maybe the audience has it coming after all. Originally published: October 24, 2003.