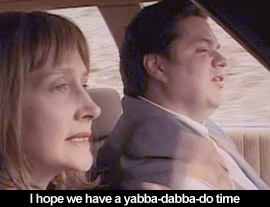 by Walter Chaw Modest in its intentions and achievements, Peter Hedges's Pieces of April has an undercurrent of paternalistic racism that verges on the disturbing. April (Katie Holmes, great but wasted) and her boyfriend Bobby (Derek Luke) invite April's difficult family to Thanksgiving dinner. Because it's potentially, ominously, the "last" Thanksgiving, the estranged nuclear unit composed of mom Joy (Patricia Clarkson), dad Jim (Oliver Platt), grandma Dottie (professional grandma Alice Drummond), and their other two children Beth (Alison Pill) and Timmy (John Gallagher Jr.) pack themselves into the station wagon and head up the interstate. The picture cuts between April struggling to find someone in her tenement who'll lend her the use of an oven and the family doing their best to suffer the acerbic, often nasty Joy.

Hedges, author of What's Eating Gilbert Grape and its screen adaptation, specializes in this brand of the milk-fed adolescent dysfunction blues. What he's not very good at is painting minority characters with as much shading as his lower-middle-class heroes. Worse is his instinct to be coy about that weakness, playing with the idea that Bobby is some sort of drug dealer attempting to rendezvous with a mark or dealer ("I'm here, man, at the place") before revealing that, phew, Bobby's only meeting a friend who works at a thrift store who'll agree to open the place on a holiday so that he can buy a suit. Why Bobby's waited until that morning to buy a suit for that evening is a mystery; also a mystery is the ominous spectre of "Tyrone," who hunts Bobby through the streets of NYC only to reveal himself as an antagonist, no question, but a Caucasian one. It almost feels as though Hedges is scolding the audience for their preconceived notions: the idea that a young black man on an inexplicable mission making a mysterious phone call from a pay-phone could just be arranging a date for buying a secondhand suit, that evil "Tyrone" would actually be a white guy with an urban fetish, or that a family in a bad neighbourhood should act surprised and fearful when a large, bloodied black man would jump on their hood and pound on their door.

April, meanwhile, encounters a kindly Chinese family in need of a civics lesson on the origins of Thanksgiving (believe me that the Chinese are a nation of people who've done their homework) and a kindly African-American couple who bicker lovingly over their gourmet feast. The white people range from an animatronic weirdo (a horrible Sean Hayes, easily the worst thing about this film) to a freaked out vegan whose speech about meals with faces has no motivator, to a cat-obsessed man who misses his own evil mom. Pieces of April is cutesy and contrived, with the performances of Holmes and Clarkson the only things anchoring Hedges's bits and pieces. A climax where Joy hitches a ride with a couple of bikers rings as false as the device of narrating a key scene with snapshots and sad folk music, but the chief frustration of the film is the number of chances Hedges declines to make an equal-opportunity disaffection drama. That inability or unwillingness to find common ground in matters of family and eccentricity marks the piece as too specific to be generally affecting, and too alien to be plausible beyond broad caricature. The bleak, overexposed, handheld digital cinematography suggests vérité, but Pieces of April is just another white fantasy of helpful, unflaggingly one-dimensional minorities: Coloured Eye for the White Guy. Originally published: October 17, 2003.