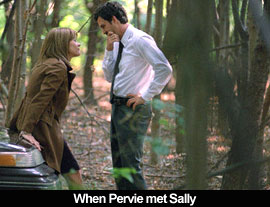 by Walter Chaw Frances Avery (Meg Ryan) is in love with words. She moves through life obscuring herself in a nimbus of them, passing through the world with poetry as her guiding principle. Director Jane Campion is no stranger to a life lived in thrall to poesy--her films An Angel at My Table and The Piano detailed the life of poet Janet Frame and the life of the mind, respectively, and In the Cut finds its meaning and rhythm in the words that Frannie collects, fragments of poems cut from books and collected from subway walls. The New York through which Frannie walks is festooned with ghosts of American flags, tattered and blown after two years of constant display, losing their meaning along with their colours fading up to the sky. Likewise, Frannie sees herself a phantom of unmentioned tragedies, haunting her own life, retreating to the comfort of words when a half-sister, Pauline (Jennifer Jason Leigh), pillories her chaste existence, or when Detective Malloy (Mark Ruffalo) interrogates her about a string of serial murders he's investigating. A scholar of words, Frannie is involved as the film opens in a project analyzing inner-city slang: language as organic and in transition.

The word "cut" is woven into the words early on: "He cut her neck," and, "It's nothing, just a cut," and, "She had long blonde hair before she had it cut." You notice it, then you notice the ways the film uses fragments--cuts--of poetry and prose--that a mention of and comment about To the Lighthouse predicts the course of the film's crime subplot as well as a small red lighthouse on somebody's desk; that a rapturous consummation of Federico Garcia Lorca's phrase, "The still waters of the water under a frond of stars/The still water of your mouth under a thicket of kisses" precedes Frannie's consummation of her sexual fantasies of Malloy. That emergence from word to fantasy, then fantasy to articulation (and Malloy's description of the murder victims as "disarticulated" is poignant), is the basis of a great deal of Campion's work, films that feature women trying to transcend a dream into some uneasy alliance with reality. In another conversation, the process is a description of how a film comes into being from another medium (in the case of In the Cut, a novel by Susanna Moore), and after all, the whole of Western mythology is based on that belief that in the beginning is the word, and that Adam dreamed Eve before he woke to find her real.

There are more cunning doppelgängers in the picture, though, beyond the transcription of word into being. A mugging is recreated as foreplay and an ex-boyfriend (Kevin Bacon, in a role that gently mocks his cult status as some weird omniscient celluloid presence), eternally clad in hospital scrubs, makes the streets of the East Village a disease ward of souls locked into their own delusions and halos of grief. In the Cut reminds a lot of Lost in Translation, both titles speaking of a state of being rather than a turn of phrase (while also being, of course, a turn of phrase), and both capturing something like a fugue state in their depiction of the struggle for and indulgence in transgression. Early in Campion's film, Frannie breaks three barriers: sexual in a kiss with another woman, social in a descent into a seedy bar's basement, and racial in an unexplained meeting with a black student--stories of transgression generally the basis of horror films, here they're subverted to something like a commentary on the fleetingness of a kind of literary modernism. It's the idea that a poet can wander through the wasteland, collecting bits and fragments, testing boundaries like Virginia Woolf en route to producing streams of consciousness that encompass fleeting glimpses of disturbing images and become corrupt only by the aggregate of them.

In the Cut's New York is Travis Bickle's New York, a seething, doomed metropolis, swathed in delusion, crushed beneath decadence. When Frannie reads a line from Dante--"Midway along the journey of our life/I woke to find myself in a dark wood,/For I had wandered off from the straight path"--she finds herself accordingly in an inferno and, soon, a dark wood with Malloy, by a lake filthy with mysterious black garbage bags, and quoting John Keats's "La Belle Dame sans Merci" ("Though the sedge is wither'd from the lake,/And no birds sing")--a poem that speaks of a fantasy of a seduction that ends with: "And I awoke, and found me here/On the cold hill side./And this is why I sojourn here/Alone and palely loitering". It is Keats's "consummation sublime" in a few lines--a fantasy of sex that ends with disappointment and abandonment and an indication that Frannie either understands the world as a poem, or that the world is a poem, or, best of all, that this world in this medium is poetry.

Like Frannie, Sylvia Plath begins Sylvia, the film of her life, in words, words excerpted from her 1962 poem "Lady Lazarus" ("Dying/Is an art like anything else./I do it exceptionally well./I do it so it feels like hell."), announcing in the first moments the idea that the picture will recite poetry rather than evoke it. Kiwi director Christine Jeffs follows her haunting, brilliant debut Rain with this biopic misstep, a film that, taken with her previous effort and compared against In the Cut, highlights the difference between a film that is poetic and one that has a lot of actors sitting around reading poetry. In between airless recitations and unintentionally hilarious confessions (on a boat, Sylvia (Gwyneth Paltrow, essentially reprising her better turn in The Royal Tenenbaums) admits to husband Ted Hughes (Daniel Craig) that she tried killing herself by drowning--the poor bird by this time is so relentlessly mordant that the admission is really quite comical), the picture works at narrative in a breathless meet-cute in a dance hall, a breathless rendezvous with Plath's mom (Paltrow's real-life mom Blythe Danner), and a breathless spawning of convenient children who disappear whenever the script has nothing for them to do. Every introduction of Plath in the first hour, in fact, is scored by happy orchestrations and presents her as a young woman full of spit bursting onto the scene, the life of every party.

The picture is clumsily-edited shorthand. A shot where Sylvia and Ted are dancing jumps, like magic (or like incompetence), to the two of them, in the same two-shot, holding drinks. (Most likely, it's the result of last-minute trims executed by stale eyes.) There's a scene in which Sylvia proves her literary mettle to "the boys" before "the boys," their purpose sated, are summarily jettisoned into the ether; a scene in which a baby makes it hard for Sylvia to write before the baby, its purpose likewise fulfilled, disappears during a furniture-breaking argument; and a scene in which Ted romances a pretty writing student to confirm his philandering--the student promptly vanishes. Sylvia doesn't have time for the niceties of coherence when there are so many literal years to cover in the life of the poet, and it doesn't understand that metaphor used smartly can create the space for poetry recitations. What compels isn't the dry presentation of every key event in the artist's rather dreary life (see also: Frida), but the way that words weave a rapturous web: Is Plath's poetry a reflection of her turmoil, or is her turmoil a reaction to the word? The picture knows the poems that Sylvia Plath wrote; it just doesn't know why.

Like In the Cut, Sylvia wants its heroine in love with words and it does so by having Plath recite Chaucer to a pasture of cows just after she trails a hand in a waterway like Alice in Dreamchild, a better film about being drunk on prosody. It's Dead Poets Society played by actors playing dead poets, reading verse from memory as in a prep-school drinking game, faster and with less feeling and nothing at all to moor it to the tragedies--and triumphs--of a life lived in thrall to pen and Underwood. By the end, Sylvia becomes something of a coy and morbid interminable joke. Plath's contemplation of a handful of sleeping pills a tease to be giggled at rather than a quandary to be shocked by--when will she do it, finally, and free us all from having to hear another actor read another poem that should be meaningful, but lacks contextualization? Her late interactions with a downstairs neighbour (Michael Gambon) are a spark that lends insight into the places the film should have gone with a smart foil affording the kind of perspective the rest of this hermetic bell jar of a movie lacks. The thing that most alarms about the picture is the fact that Plath's poetry is already astonishingly transparent, and that there is no irony, no poignancy, mined by Sylvia from the poet's fixation on death and rebirth (nor the parasitic reliance of poets on the power of the word) says a lot about what it is about the picture that so fails--and what it is about In the Cut that so intoxicates. Originally published: October 31, 2003.