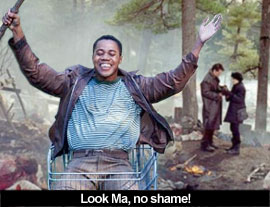 by Walter Chaw Some pharaohs spent their reign building mighty pyramid tributes to themselves, so in that respect we should feel lucky that Angelina Jolie and Cuba Gooding Jr. have only used up the latter part of their plummeting careers constructing towering monuments to their splendid ideological isolation. The real wonder of it all is that there's room enough in the universe for both of their dangerously inflated senses of self-satisfaction, simultaneously reaching their respective pinnacles in a pair of atrocious films that at least have the virtue of being really funny, albeit for all the wrong reasons. For Jolie, her desire to save the entire third world, one orphan at a time, manifests itself in a picture that poses the big-lipped beauty carefully as a fashion plate and a sainted martyr; a debutante with an amazing wardrobe and a UN worker with a streak of activism; and a figure in its way as ridiculous as Gooding Jr.'s caricature of a severely mentally-disabled man (James Robert Kennedy) that reminds, of all things, of that acorn-crazed, pre-verbal prehistoric squirrel from Ice Age.

Where Beyond Borders, Jolie's film, does its best to be at once patronizing and exploitative of disenfranchised peoples, indulging at least once every thirty minutes in gifting Jolie with a freshly-orphaned baby of colour she can lug around on her immaculately-coutured hip, Radio offers its audience the opportunity to cluck and fawn over the adorably disabled Gooding Jr.. The two pictures serve to scold us for not doing more to salve the world's burden of injustice before relieving our newfound guilt with the systematic dehumanization of their subjects, presented as they are in various degrees of helpless victimization. Objects of pity, Jolie's and Gooding Jr.'s dark orphans are reductive scapegoats tendered for scrutiny like captive animals terrified for the greater good (and their cooing sympathy) on late-night television. I thought a lot about documentary filmmaker Steve James's confession in his film Stevie that he believed the "Big Brother" program to be an idyllic partnership between an adorably inconvenienced child and a college-age member of the bourgeoisie--before he met his actual ward: a mentally challenged, mercurial child from a broken and abusive home.

Sarah (Jolie) is a pathological do-gooder who finds herself, Zelig-like, at three key areas of strife during key periods in time: Ethiopia during the famine, Cambodia during the Khmer Rouge, and Chechnya after the fall of Communism. After rescuing a baby in Ethiopia whose mother has just died by vulture (and a baby in Cambodia whose mother has just died by thug), Sarah rescues her lover Dr. Nick (Clive Owen) in Chechnya after he's been kidnapped by rebels wishing to ransom him to someone like her. Decked out in fabulous era-specific duds (including a Dr. Zhivago fur hat framing her trembling, noble beauty), Sarah is bwana to the world, representing, along with tortured Dr. Nick, the ability and responsibility for the almighty West to save the rest of the world from itself. Scored histrionically by James Horner (a score not only as irritatingly intrusive as the one he does for Radio, but very possibly the same one), the composer seems to be making a play for the title of New John Williams: lazy, grandiose, and singularly unable to not mimic Holst's "The Planets." If you're a filmmaker on the horn to Horner, wonder first if your film is wholly incapable of eliciting an emotional response without this kind of soaring orchestral soup as crutch and jerker.

Harold Jones (Ed Harris) is also a pathological do-gooder who finds himself on the side of an intellectually-challenged black man in a curiously flaccid South only sort-of seething with racial hatred that translates in Radio as a polite euphemism for high-school sports. As the white bully running-back and the black star receiver conspire to trick hapless Radio into the girl's locker room, though, it's clear that Radio isn't concerned with race (even though its centerpiece dramas occur in an all-white barber shop and despite that Radio's mom is a janitor and Radio's tormentor a banker) so much as it's interested in pure, unfiltered, easy-to-swallow Hollywood pap. The opportunity for social commentary is glad-handed with a politician's grace, all the troubles of the world boiled down to a moment where Jones actually intones, "It's not so much that we taught Radio, it's that Radio taught all of us." You've got to be kidding--is the suggestion of the film really that the answer to our ills is to create a caricature of an impossibly noble retarded person and bestow upon him the weight of the world's morality? It's an interesting movie to be released during Bush Jr.'s presidency, for sure.

The problem with both films is paternalistic racism. In Beyond Borders, we're asked to view the downtrodden minorities as entirely dependent on white folks for their salvation; in Radio, we're asked to view Radio as an object of pathetic adoration (chuckle warmly as Radio snatches a hamburger; chuckle warmly as Radio knocks a kid down during practice; chuckle warmly as Radio gets hit in the head by a football)--to treat the character like a puppy that, like the helpless refugees of Beyond Borders, represents our own failings as human beings. The irony of such pabulum, presented as it is polished to a high sheen and over-scored with a pungent lavishness, is that it represents by its very existence the worst arrogance of the western world. The cause for human rights is an amazingly complicated one--to reduce it to the idea that wealth and the well-wishes of white people is the answer, snicker snack, is sickening. A pat on the head for the noble savage, and a deep sense of relief that our own demons, through the disadvantaged "other," have been exorcised by our magnanimity; Beyond Borders and Radio are the nadir of middlebrow socialism, and reason enough why the rest of the world just hates America's guts. Originally published: October 22, 2003.