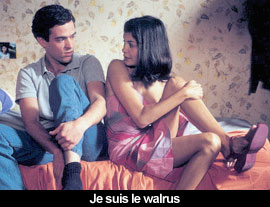 by Travis Mackenzie Hoover Cédric Klapisch is the director of a mid-'90s gem called When the Cat's Away; although it wasn't of great shattering importance, it understood that, and turned out to be enjoyably funky nonetheless. Alas, the intervening years have taken their toll on Klapisch's sense of self-importance, because now he's made L'auberge espagnole--a film with the potential to be another enjoyably funky little movie that instead pushes banal life lessons and shallow cultural observations. L'auberge espagnole might have squeaked by had its tale of a French student in a Barcelona rooming house just been a sex farce with low ambitions, but as it stands, it's a sex farce that thinks that it's actual drama, making for some serious head-slapping when it drags out the ersatz "importance."

About that student: he's Xavier (Romain Duris), a young go-getter who seeks an international-oriented position but lacks the Spanish that the job requires. Enter the Erasmus program (and many bad jokes about who the hell Erasmus was), which sends him to Barcelona to immerse himself in the language. Little does he know that he'll be immersing himself in a few other things--specifically, the melting pot of nationalities that he winds up rooming with. British, Spanish, German--there's even a Belgian lesbian who teaches our hero how to properly grab the ass of a potential conquest. (That's what lesbians do, after all.) Sure, his French girlfriend (Audrey Tautou) is a little miffed at his leaving her for another country, but Xavier has more important things on his mind--like the comely doctor's wife (Judith Godrèche), with whom he seeks bliss between the sheets.

After a while, it becomes obvious that the protagonist is a bit of a cad. So, it turns out, are a few other members of the philandering household--but that doesn't stop Klapisch from rendering everything in sunny shades of yellow and orange and soft-pedalling any emotional outburst from any segment of the household. While anyone who's lived as a student with a big whack of people knows that those little outbursts can cause rifts and anguish a at a much higher pitch than Klapisch is willing to admit, a film that's hypocritical about the sex lives of its characters can't possibly be expected to be honest about anything else. And so L'auberge espagnole's total lack of affect makes it waft in and out of your eyes and ears, as you know that nothing of consequence (to Klapisch, anyway) is going to happen.

There's nothing technically wrong with L'auberge espagnole. It ladles on its bright colours with some skill and manages to keep the mood high and upbeat for the duration. Had the film been an exercise in risqué naughtiness, this might have tided us over. But Klapisch seems to think that he's making some kind of a statement, and the intrusion of his delusion takes the film out of genre and into something more distasteful. We can't blow off the characters as sexy cartoons because we're meant to see more in them--and the fact that Klapisch sees something deep out of the stories of various betrayals is, to put it mildly, a tad alarming. If you can watch this without judgements, you might be entertained, but your constitution is a great deal stronger than mine. Originally published: October 17, 2003.