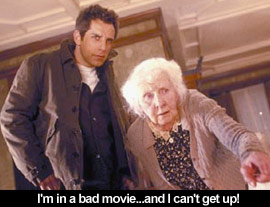 by Walter Chaw Danny DeVito's Duplex begins promisingly enough as a dark comedy, its resemblances to The War of the Roses (and Throw Momma from the Train) only natural as DeVito directed both of those as well. But by its sunny conclusion, Duplex is a spineless bit of populist garbage that tries to mine broad cheer from the murder of an irritating old lady. The movie of value in this premise is one that examines the ways that young people hate the frailties of senior citizens, and for long stretches of the picture, the neo-yuppies played by Ben Stiller and Drew Barrymore are cast as self-centered assholes more interested in procreation and real-estate values than in the golden years of their upstairs tenant. Sadly, DeVito is the worst kind of coward, condescending to an audience he doesn't believe able to handle ambiguity, crafting in the process a film that so completely betrays its moments of audacity at its conclusion that the failure of Duplex lingers in memory as something to be more pitied than derided.

Alex (Stiller) and Nancy (Barrymore) are upwardly mobile thirty-somethings moving into the titular Brooklyn duplex, its upper-half already inhabited by the good graces of rent control by Mrs. Connelly (Eileen Essel), a dotty old bird who, to the young couple's consternation, just refuses to die. Worse, the crusty Irish widow has the audacity to ask for help going to the store and taking out the garbage, and galls with the gumption to be offended when Alex and Nancy repeatedly violate her space.

There's a withering satire of the selfishness of the American dream gasping for air in Duplex, smothered at conception by DeVito's nauseating taste for schmaltz, which finds him crafting scenes of forgiveness for his feckless duo and moments of vilification for the heretofore just old Mrs. Connelly. The effect of all that handkerchief wringing and limp-wristing is a picture thoroughly robbed of all sense and satire, asking that we take Duplex as some kind of slapstick horror movie with the withered crone in the attic tormenting our upwardly-mobile interlopers. And yet, that's just not the film that we've been watching, no matter the last ten minutes' claims to the contrary--Duplex is a completely gutless dark comedy, a punchless satire as flaccid as it is disingenuous. A moment within where Alex tries to catch a virus so that he can pass it along to Mrs. Connelly is all the more heartbreaking for its evil brilliance, encased in a film trying so desperately to be lighter than air.

Duplex is better than DeVito's last film, Death to Smoochy, mainly because it does have a few moments that bristle with ugliness and tension, but it shows itself to be so craven in its intentions--so obsequious in its desire to be embraced--that it's actually more revolting than Smoochy's smug misanthropy. What's offensive isn't that Alex and Nancy might be the villains of the piece, but the message that there are no villains in the piece. It's a rosy sort of naiveté that stinks of a creative team so patronizing, they believe we won't notice when we're being sold a bill of goods, or that the rug has just been pulled out from under us. The real danger of the foisting off of this rubbish is that Duplex tacitly sanctions its viciousness by clothing it in a desperate illusion of acceptability. Make no mistake that the picture hates the elderly and homosexuals who are its real social deviants, not the highborn miscreants who value decorative bronze peacocks over the life and comfort of an old woman. Originally published: September 26, 2003.