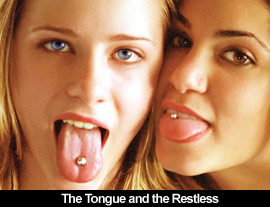 by Travis Mackenzie Hoover I'm a bit surprised to have liked Thirteen as much as I did. For one thing, it has no particular point of view--things simply happen in and of themselves and aren't much related to the outside world. For another, the film is somewhat obvious in the way it depicts its various outrages, almost cuing us to register their brutal nature instead of simply letting us draw our own conclusions. But Thirteen's heavy-handed chaos mirrors that of its teenage protagonist, who is in the grip of emotions she doesn't understand and whose responses are as arbitrary as they are destructive. The agony depicted is real, and while the film is no aesthetic miracle, it manages to blast through its limitations with its primary emotion.

This is the story of Tracy (Evan Rachel Wood), a 13-year-old sliding into delinquency. Vaguely aware that she is not enough as she is, she emulates the apparently cooler Evie (Nikki Reed), from Evie's disturbingly come-hither wardrobe to her penchant for drugs, petty crime, and boys. Despite the better efforts of her hairdresser mother Melanie (Holly Hunter) to protect her, Melanie can't be everywhere at all times, and Tracy's absent father isn't really a factor, thus she's largely free to engage in self-destructive behaviour with her ego-ideal best friend and sink into a morass of behaviour that isolates her from her family and, indeed, most people.

Alas, director Catherine Hardwicke's incredulity at Tracy and Evie's exploits is the film's biggest stumbling block. She's too desperate to shock you with their unbelievable behaviour; her opener is the two girls merrily bashing each other in the face after getting high off of aerosol gas, inserted so as to steel you to the events you're about to witness. It's not that Hardwicke is being exploitative, but that her framework for understanding these events comes from a lifetime of exploitative movies, and they make a bad fit with the questing nature of Tracy's descent. We know that her behaviour is bad news, but the attempts to stun us get in the way of understanding the root of the problem, and keep the film from reaching any conclusions beyond the assertion that it is, indeed, a bad idea to do these things.

And yet, the raw material of this movie is so compelling that you forgive its analytical transgressions. Hardwicke and co-writer Reed (who is the apparent basis for the film) transcend Thirteen's unfortunate antecedents through eventual melancholy and sadness, showing how Tracy's hunger for her friend's approval results in disappointment in herself for not achieving her ideal, and that the highs she chases aren't as big as she hoped for. The film ultimately hinges on ennui more than horror, depicting the comedown from the trip as much as the trip itself and the unhappiness that precipitated in the first place. In so doing, Thirteen gives itself purpose beyond a finger-wagging corrective or a blunt case history, keeping it from turning into the Afterschool Special it could easily have become. Originally published: August 6, 2003.