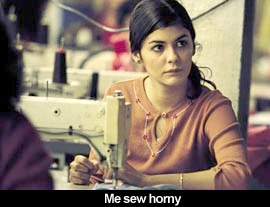 by Walter Chaw Stephen Frears, like antipodean director Phillip Noyce before him, found the Hollywood waters to be a touch turgid and so in 2000 went back to the small country where he first rose to prominence. For Frears, who made his first resonant mark with a fantastic quartet of films--My Beautiful Laundrette, Walter and June, Prick Up Your Ears, and Sammy and Rosie Get Laid--in the mid-'80s, the return to his homeland presaged a return to his interest in England's bottom caste and immigrant class, first with the grim, slight Liam and now with the trancelike, nightmarish Dirty Pretty Things. Its title both a reference to smarmy hotel manager Juan's (Sergi López) philosophy of hotel management ("Our guests are strangers--they leave dirty things, we make them pretty things") and the idea that the "pretty things" might be the film's pretty heroes, Nigerian refugee Okwe (Chiwetel Ejiofor) and Turkish illegal Senay (Audrey Tautou), dirtied by the realities of blue-collar London. The struggle between the pragmatism of Juan's outlook and the idea of sullied purity of Okwe and Senay is really all you need know about the picture--it's a piece composed of equal parts social realism and fairytale martyrdom, with either part watered down by the other.

Regardless, Dirty Pretty Things is possessed in moments of the kind of advancing fever-dream intensity of Martin Scorsese's After Hours, bristling with the idea that every great city is alive with invisible people while its hero Okwe, eyes red with lack of sleep and herbal stimulant, is steadily reduced so that our entrée into this world is made shaky and unreliable. Cabbie by day and hotel porter by night, Okwe shares an apartment, chastely, with hotel maid Senay, so jealously protecting her virginity that it's a queasy certainty it will be the first casualty of an allegorical deflowering. If not for, and even with, an unfortunate desire to state the obvious in a series of tableaux and noble monologues at film's end, with that urge to paint its heroes as flawless and faultless, Dirty Pretty Things provides astringent unguent to the wounds of a nation--any industrial nation, really--that thrives on the immigrant culture it abhors. The picture is too didactic by half, but when it works, as in the character of a Chinese morgue worker (Benedict Wong) who's a sort of Charon for the working class ferrying Okwe from hope to despair, it pulses with a bracing nihilism--enough so that its twin conclusions, shunting one character off to certain doom and the other to probable doom, land with an unusually arctic bite.

The thought of refugees traveling with hope from certain disaster to probable disaster defines the centre of Dana Janklowitcz-Mann and Amir Mann's Holocaust documentary Shanghai Ghetto, crucifying the free world's shameful policy of denying safe passage for Jewish refugees in the early years of WWII. With Shanghai the only port allowing immigrants without paperwork safe haven (the Japanese believing that the Jewish secretly ruled the Western world so therefore safe passage for Jews into Japanese-occupied China would buy them eventual favour with the Americans), and with a thriving international culture already in place post-Opium War, the Jews who found their way to Shanghai found themselves in relative squalor but intact and in a state still several rungs higher than the oppressed, routinely slaughtered Chinese. That the Jews were allowed to form their own schools and cultural centres, complete with international aid and a certain degree of freedoms, is one of the more peculiar anecdotes of the madness of war--no less so, I guess, than Aryan Nazism joining hands with the Japanese in the first place. Though many of the interviews and photos of this most conventional of documentaries are made routine by a glut of Holocaust reminiscences, Shanghai Ghetto does affect in a moment or two, mainly through its descriptions of the kindness of the Chinese, a tale of a sister whose aid to a brother in France arrived one day too late, and in the universal feeling among the survivors that their fate was Valhalla compared to the fate of many of those they left behind. It's too bad that the picture lacks a clear narrative thread and, ultimately, much of a point besides telling a weird little story in an overly familiar sort of way.

Similarly, and structured like nothing so much as a William Asher beach blanket bomb-o, Todd Graff's Camp is a paean to teen theatre folk that identifies a straight kid as the one who performs a Rolling Stones tune on an acoustic guitar (off "Sticky Fingers," natch). Sad fact of the matter is, the picture, were it in guitar form, would be smashed into a wall by Bluto. Camp follows the Frankie and Annette formula with an interesting fidelity: alternating musical sequences with bad melo-dramedy, and anchoring its festive festivities with a set of cultish, fetishistic contrivances geared toward maximum queer idolatry. But it also covers the sort of light teen paranoia that Asher substitutes for conflict in his pictures: the fear of bullies, the fear of commerce and its attendant suggestion of adult responsibility, and the fear of sex even as sex rushes in on a hormonal tide. The film's stars are likewise unprofessional movie actors (Annette a Mouseketeer; Frankie a teen idol), managing not to stare directly at the camera for minutes at a time while tripping through a broad screenplay (also by Graff) that plays like something composed by the high school cast performing it. The first hint and the last straw is the use of Meatballs-cum-M*A*S*H PA announcements as whimsical linking device--an instinct towards the low end of camp that a powerfully creepy performance by Broadway darling Anna Kendrick, in an All About Eve subplot, can't balance in the final equation.

Vlad (Daniel Letterle) is a pretty breeder away to summer Camp Ovation, a getaway for the pre-Julliard peopled by composite characters like the melancholy queen Michael (Robin de Jesus); the budding diva Jill (Alana Allan) and her meek toadie Fritzy (Kendrick, the one true find in this cast); the ugly duckling with the heart of gold and Annette to Vlad's Frankie, Ellen (Joanna Chilcoat); and the fat girl with mean parents who don't know her inner fears and desires, Jenna (Tiffany Taylor, killer voice). Because Vlad is interested in attention, he has dalliances with a trio of girls while constantly teasing besotted Michael, and because Camp is a redux of the teen-party flicks of the Sixties, every plot line is either resolved with the de rigueur pageant, or swept completely to the skirts like the inconsequential rubbish we suspected it was all along.

Buried in there among the smug self-satisfaction of a project like Camp, the sort of picture that takes for granted the middlebrow art crowd's desire for political correctness at arm's length and poetic resolutions that avoid actual depth of meaning, is that nagging feeling that it's actually pretty patronizing to the outcasts it seeks to celebrate. Just the suggestion that a place like Camp Ovation is populated entirely by not merely the un-beautiful people, but sociopathic misfits and the chemically balanced (even golden boy Vlad is given a weird dysfunction), offers the unpleasant suggestion that theatre people are mutants best served by quarantine. The performance pieces, highlights from Stephen Sondheim and Burt Bacharach, are uniformly excellent, but the shots of an admiring audience, particularly during a standout "The Ladies Who Lunch" number from Sondheim's Company, begin to take on the appearance and tenor of a carnival mob crowded into a sideshow tent. Graff's distillation of the shape and trials of the performing kind into stock caricatures is, after all, perhaps the point: Rooted in the perversely bland performances of Frankie and Annette of yesterday is the oversold idea that the freakishly talented and unsocialized children of Camp are just as banal and humdrum as the rest of us--maybe more so. How disappointing. Originally published: August 20, 2003.