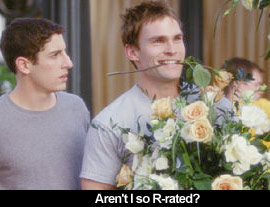 by Walter Chaw Joining the Porky's triptych as teensploitation smut franchises that have made it to three instalments (the Revenge of the Nerds series has four chapters, but only the first two are really all that smutty), American Pie finds (hopefully) its conclusion in the dreadfully incomplete-feeling American Wedding. A series of set-ups without punchlines that compensate for the deficiency by featuring a truly impressive number of random de-pantsings, people caught in unlikely tableaux that are inevitably mistaken for some sort of sexual deviancy, and a stable of stock characters so locked into their exploitative roles that existential questions of predestination and choice tickle at making the picture interesting. Featuring the best fecal-consumption-mined-for-yuks scene since the second Austin Powers movie (though a disappointingly minimal amount of gratuitous nudity), American Wedding can, in all honesty, be analyzed with profit as a satire of the whole tits-and-zits genre. It resembles Jurassic Park III in its general disdain for its audience and fatigue with its own shake-and-bake premise, but it does have a couple of laughs--the best bits involving a surreal dance-off and a ridiculously convoluted sequence with a pair of role-playing strippers.

Lovable nebbish Jim (Jason Biggs) is getting married to sweetheart Michelle (Alyson Hannigan, who doesn't appear to be a freak until the cameras roll; see also: Keanu Reeves), while trying to keep the fact of the nuptials from depraved nitwit Stifler (Seann William Scott, still working on that audition tape for Jackass). Relying, as usual, on Eugene Levy's "Jim's Dad" for a few unfortunate "oh my goodness" reveals, the parade of humiliation this time around takes a detour through "bride's parents" territory with the introduction of Michelle's mom and dad (Deborah Rush and Fred Willard), who, a lot like Jim's Dad, are mainly asked to be the foil/straight people to the picture's tireless puerility. By the end, Stifler will redeem himself after being disgraced a few times, egghead Finch (Eddie Kay Thomas) will resume his affair with Stifler's Mom (Jennifer Coolidge), and Jim and Michelle will prepare to film American Honeymoon or something.

Though an entire subplot devoted to homosexuals in a film like this is usually cause for trepidation, American Wedding distinguishes itself with a refreshing affection for its gay characters--enough so that a few same-sex smooches are shown without irony, a same-sex dance is left uncommented-upon at the reception of the wedding in question, and a gay character named Bear (Eric Allan Kramer) is allowed to be a key figure in two set-piece gags. Credit is due screenwriter Adam Herz, on board for every film in the trilogy, for not taking the easy, nor the abysmally imprudent (Gigli), way out. For all the weaknesses of the picture (the lowness of its humour, the formalist cliché of its plot, the questionable performances of its twenty-something leads), it gains for the jettisoning of dead weight (professional dead weight Mena Suvari, Chris Klein, Shannon Elizabeth, and Tara Reid), and for that vague suggestion that it knows how tired and self-replicating it all is by now. The question of why they keep making them, financial considerations aside, remains something of a mystery. Originally published: August 1, 2003.