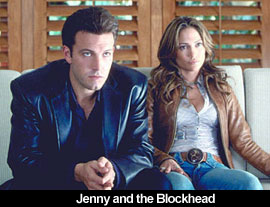 by Walter Chaw While it doesn't live up to its hype as the worst film ever made, Martin Brest's Gigli, with its creepy contention that Ben Affleck is the cure for lesbianism, certainly makes a run for the most unintentionally hilarious film ever made. Its first mistake is in giving not one, but two charisma vortexes the leading roles, the sucking black hole this creates at the film's centre thrown into sharp relief whenever a real actor (Christopher Walken, Al Pacino) makes a cameo appearance. The most surprising thing about Gigli isn't the failed casting gambit or the gruesomely over-written dialogue (this isn't anyone's first film, after all), however, but rather the idea that Jennifer Lopez would authorize the reduction of her famously outsized posterior on the posters--abandoning (after mocking it in Maid in Manhattan--which, as it happens, was written by Brest's Meet Joe Black scribe Kevin Wade) what is arguably the only thing so far about Lopez that hasn't proven to be facile and over-hyped.

At the risk of sounding facetious, Lopez's glutes are the starlet/diva's one true thing: inevitably the locus of every scene, relegated now to Lopez's own status of in-joke in decline. But her ass was never funny to me--it was until now the equivalent of Marilyn Monroe's beauty mark: impossible to overlook, a statement of identity and individuality (one that, for Lopez, proudly encompasses and subverts a stereotype of her race and nationality), and an arguable imperfection paraded proud before the eyes of the ruling class that actually opens doors for other non-traditional beauties. When Gigli's mentally challenged character (I should clarify: the one written as mentally challenged) breaks into a Rain Man rendition of Sir Mix-A-Lot's "Baby Got Back," the last thing that was unique, even valuable, about the increasingly difficult-to-stomach Lopez is suddenly a smarmy, winking gag that serves to illustrate exactly how far Lopez will go to distance herself from "the block."

The question of Lopez's marginalized mud flaps aside, the central character of Gigli is Larry Gigli (Affleck), a wimp of a mob-contract enforcer enlisted in the kidnapping of a Federal Prosecutor's brain-damaged little brother Brian (Justin Bartha, who's good here, but at what?). Not trusting the schlep to act on his own (so why trust him at all?), consigliere Louis (Lenny Venito, arguably the best thing about this mess) sends Sapphic hit-person Ricki (Lopez) to watch Gigli watching Brian. Already tangled beyond resolution, Brest thickens the plot with a few Sun Tzu quotes (notes for Brest's future reference: don't ask Brad Pitt to say "Machiavellian machinations," and don't ask Lopez to quote Sun Tzu), a few top-heavy debates on the merits of penises vs. vaginas, and a five-minute walk-on from Christopher Walken that represents the only moment in the picture with the kind of quirky, intelligent heat to which Brest so nakedly aspires. By the end, it can't come as any surprise that the antagonistic Gigli and Ricki end up rolling in the hay; that Ricki, by extension, has been shown the error of her lesbian ways (and why not--the only other lesbian in the picture is a psychopath); and that lovable gimp Brian has ingratiated himself into the hearts of our hardened criminals. It's a dysfunctional family, damnit, but it's ours.

With a score that marries perversely jaunty organs with the kind of guitar work Clapton did on Roger Waters's "The Pros and Cons of Hitchhiking" (ethereal, eerie, inappropriate), the picture smacks of desperation and pretension. It rips off the "word a day gangster" conceit from Kangaroo Jack, of all things, and doesn't offer dialogues so much as a death march of awkward monologues. The pair of Affleck and Lopez equally not up to the task, it is she who takes the brunt of the abuse with a much-publicized turkey/oral sex come-on ("you know, gobble gobble") and an extended drone about something called "Cheng Woi Mai," or, "the rip that takes the past"--a fictional martial arts move that obliterates the visual cortex, thus stealing all memory of what's been seen. It's just one of many moments that are uncomfortably self-reflexive--by this point in the film, a little Cheng Woi Mai is just what the doctor ordered. Not helping things is Lopez's inexplicably worsening Betsy-Wetsy lisp that transforms a line like "brutal street thug" into "bruel threet fug."

With a weird sentimental payoff and unlikely epilogue tacked on after a disastrous test screening (it wouldn't have made a difference where the film ended, the problem is with the film starting), credit is due Brest for remaining at the least committed to his voice no matter the cost. His pictures always non-traditional (even Beverly Hills Cop is surprisingly stately in its development and resolution), Brest is at his best in presenting the broad, the theatrical, even the melancholy through his word jumble (Walken can say "absconded" without irony; Lopez can't even read in the film without moving her lips), and at his worst when trying to justify surprise moments of spontaneous lovemaking and unlikely romance (see also: Meet Joe Black).

Brest's major failing, though, now and always, is not in that rare quality of being true to himself and his vision, for better or worse, but by having too much confidence in his ability to mold the shallow end of the A-list to his difficult vision. It's doubtful to me that, say, Terrence Malick would trust baggage-laden duo Affleck and Lopez to anchor his next picture--leave that tragic miscalculation to Kevin Smith. It's telling that Brest's best film, Midnight Run, also boasts of Brest's most consistent cast (Charles Grodin and Robert De Niro), with no Chris O'Donnells to offset the Al Pacinos, or zombie Pitts and Claire Forlanis skewing the tally against Anthony Hopkins. The question of whether Gigli would have been not just a better film but a good film with actors actually trained as actors is a fair one--the real meat to the hypothetical question (probably a rhetorical hypothetical, really) lies in the fact of its asking. The film has potential (a scene where Brian celebrates his proximity to a personal nirvana, for example, carries surprising pathos), and for all of its plot conveniences and bad editing, Gigli attracts (justifiable) venom mostly for its cast: the mortal blunder of believing that either Affleck or Lopez has Brest's confidence and courage to look foolish, and the nobility to fail with principle. Originally published: July 30, 2003.