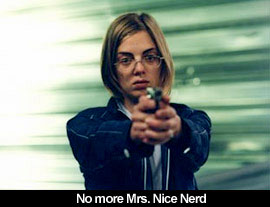 by Bill Chambers Scarlett Johansson-esque Regina Orioli stars in Monica Stambrini's Gasoline (Benzina) (hereafter Benzina) as Lenni, a bespectacled loner who went looking for work at a coffee bar/gas station one day and found love with its proprietor, Stella (Maya Sansa). When Lenni's mother (Mariella Valentini) comes to visit and tries to talk her once-presumed-straight daughter out of her gay lifestyle, a scuffle ensues between madre and Stella in which the former is inevitably accidentally killed; even more inevitably, Stella doesn't think they should tell the police despite her innocence looking forensically sound; and most inevitably of all, Lenni's mom had a fortune in her purse. If you're playing the home game and guessed that Stella and Len go on the lam, give yourself ten points--twenty if you had it down that they would do so with a body in the trunk.

Horizontal on the ground, Lenni sees her dead mother's gams and blurts out, "She always had great legs," a twisted crack that gains Oedipal significance when, later in the film, Lenni flashes back to her mother trying on a pair of panty hose--a memory that seems to renew in her a wanton desire for Stella. While Benzina isn't interested in being more than ambiguously Freudian, the time-out from indulging convention, however minor, alerts your senses to some of the picture's other deviations from cliché, like the fact that Stella and Lenni don't get very far out of the gate on their road trip, or the fate of their dog. On the other hand, the picture hasn't enough invention to forgive an early scene of a corpse getting dragged by its ankles across a floor to leave streaks of blood and brains on polished linoleum--a crutch that has replaced "Oh, it's just a cat" as the most popular idiom in modern thrillers.

Suspense cinema is an institution in Italy, home to such iconic equivalents to Hitchcock as Mario Bava and Dario Argento, and Benzina's most significant disappointment is that it is not in the genre tradition of its birthplace. Rather, Stambrini drapes the film in a cultural scramble-suit, the press notes trumpeting, "Although the film was shot on the outskirts of Rome...Stambrini wanted the story to be conveyed as taking place in any 'contemporary city' in the world." That lack of identity extends to her tasetful visuals, her view of lesbians as lipstick, and a last-minute, smiley-faced gesture for which critics, if this were a Hollywood picture, would blame test-screening audiences. Ah, who are we kidding? This is a Hollywood picture. Originally published: July 4, 2003.