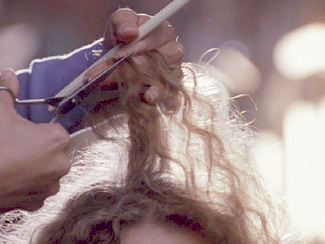 What is a haircut?

According to Merriam-Webster, it is "the act, process, or result of cutting and shaping the hair." Maybe the definition should be expanded to account for the transmogrifying impact a haircut can have on public perception of the vehicle for a fictional character. I encountered my own follicular prejudices when I went to see Lethal Weapon 4 and found myself even more put off by the absence of Martin Riggs's signature mullet than by the film's idiotic script, abject racism, and incongruous delivery-room hijinks--none of which were quite so indicative of Richard Donner's undisciplined direction as his electing to leave Mel Gibson's 'do as short as it always is outside the Lethal Weapon franchise. Perhaps we can trace this back to the Sunday funnies: imagine how disconcerting it would be if Ziggy or Charlie Brown suddenly had hair. With the ingratiation of comic books, motion pictures, and television in the latter half of the twentieth century, our escapist figures got deported from the realm of imagination; transmuted into visual icons, they consequently became far less malleable.

If indelible enough, people also use these icons as signifiers in conversation. To wit: "Have you ever watched that show with the frizzy-haired girl?" (Not--as often, at least, "with the girl who stalks her high school crush to college" or, "with the puzzle-box of love-triangle configurations thinly connected by Afterschool Special homilies.") "You mean 'Felicity'?" (Granted, you run the risk of asking about "Will & Grace" in this scenario, but I think its predominant cultural shorthand is the gay thang.) And in the case of "Felicity", the series' target demographic, females 18-35, seemed to really latch onto the title heroine's mane, as though it were part and parcel of the princess fantasy. (Women have told me that it's every girl's dream to have hair with as much body as Felicity Porter's, a whimsy that, in my experience, gets lost in the translation across gender lines.) When Felicity Porter put clippers to locks at the beginning of season two, she desecrated her own iconography--might as well have taken the top hat off Michigan J. Frog while they were at it.

The empowerment the act was meant to stand for, a salute to Rodgers & Hammerstein's ego-boosting anthem "I'm Gonna Wash That Man Right Outta My Hair," backfired for mostly superficial reasons, then (familiarity breeds attachment long before contempt), but I also believe it achieved one thing with brutal swiftness: it instantly matured Russell, giving her a new, maternal breed of glamour--thus diluting her rapport with audience members in the same age bracket. It wasn't necessarily the wrong thing to do so much as the wrong time to do it, prematurely sophisticating Felicity and inhibiting the average fan's chance of growing along with her. The irony of the show's downfall is that Felicity hadn't actually acquired any wisdom in the decision to sacrifice her Play-Doh Barbershop tresses--there were still places for her to go; trendsetters ultimately dinted "Felicity"'s reputation by denouncing the trim-to-end-all-trims as proof positive that the series ran on the fumes of hype and would auto-consume to sustain them, and while there is validity in this accusation, "Felicity" was, at the peak of its vilification, at worst spinning its wheels, at best making creative strides. "Buffy the Vampire Slayer" even lobbed a softball at Felicity's haircut when it hardly had any business doing so, during not only the Riley era, but also one of the most imagination-deprived episodes in its history ("Where the Wild Things Are," in which Buffy and Riley awaken ghosties with their insatiable sexual appetite for each other).

Finally, though, I feel that "Friends", another show that had a hairstyle as its media focal point out of the gate, survived the passing of "The Rachel" because it was founded on a bedrock of good jokes and a cohesive ensemble, while "Felicity" toiled in cliché-ville in its debut season. Viewers were all but searching for an excuse to abandon it. And if they did, they missed out on a series that progressed towards an absolutely unpredictable time-travel finish that asked tough, existential questions regarding "Felicity"'s--and any show's--reason for being.

What you get in "Felicity"'s second season--if you can get past the hair trauma, the shameless attempts to harness the emotional effects of loftier entertainments (airing a month after PT Anderson's Magnolia's theatrical release, "The Slump" (2.12) recycled its original Amy Mann composition "Wise Up," while "Crash" (2.5) reuses The Chamachas' "Jungle Fever," an inextricable soundtrack selection from Anderson's Boogie Nights), the incorporation of dull and/or annoying third wheels David (Henri Lubatti), Ruby (the wishfully-named Amy Smart), and Maggie (Teri Polo), and an episode that introduces a dog for the sake of putting it down three acts later, the show's cheapest-ever play for pathos--is the revelation and implementation of co-creator JJ Abrams's ("Alias", Joy Ride) genre influences/instincts in a black-and-white "Twilight Zone" hommage ("Help for the Lovelorn" (2.11)) that at least looks like the real deal (it helps that it was directed by regular "Twilight Zone" helmer Lamont Johnson) and in impulsive twists and turns that geekily resist Aaron Spelling depravity. And the last few episodes of this sophomore year are inexplicably relaxing.

A couple of months ago I received an e-mail that began, "Dear 'Felicity' Expert." It almost stopped me from tackling this latest DVD volume, since I like to think I have expertise in less trivial contributions to the arts--like "Dawson's Creek". But the success or failure of a media endeavour potentially holds more political currency than the census: Do you think anybody would volunteer the incriminating information that they stopped watching a television show because the lead isn't as cute as she used to be? For that reason alone, everything deserves a thoughtful review.

THE DVD
Buena Vista's 6-disc "Felicity: Sophomore Year DVD Collection" drops the Dolby Surround soundtracks of the previous set in favour of 2.0 stereo mixes (adding insult to injury, 5.1 audio is advertised on the cover art), but the video quality of the 1.33:1 transfers is more supple this time around and bonus material is in greater supply. Extras are divvied-up as follows:

Disc 4
Abrams and producer Matt Reeves introduce the "Original Pilot Presentation" (40 mins.), which is identical to the broadcast version except for two scenes added to pad the length and Felicity's admission to Ben (Speedman) that she would like to kiss him, an aggressive gesture that conversely made her too vulnerable. "Finding Felicity" (3 mins.) intercuts a charmingly insecure Russell reading from the pilot script in her audition tape with finished scenes, presumably to demonstrate that she nailed Felicity off the bat. Lastly, in "Felicity Emmy Parody" (2 mins.), Russell and her castmates enact underdeveloped spoofs of "NYPD Blue", "The X Files", and "ER", the last skit the most droll as Felicity starts recording one of her "Dear Sally" tapes in the midst of operating on a patient.

Disc 5
The best commentaries of the entire package, pretty good besides, come courtesy of Abrams and Reeves, who invite Lamont Johnson into the booth for "Help for the Lovelorn" and fly solo on "The Slump." Up front, Abrams seems to suggest that "Felicity" and "The Twilight Zone" are on a par by virtue of sharing a medium, but the track recovers from such ostentatiousness with an engrossing discussion of how "Help for the Lovelorn"'s various evocations of Fifties dramatic television, including the unironic performances by Russell, et al, were achieved. Meanwhile, the self-reflexive title of "The Slump" is examined in detail, with Reeves and Abrams saying they scoured the UCLA campus for story nuggets after realizing they were out of ideas with half a season yet to be written. Both episodes, it would appear, were attempts to recharge creative batteries. Originally published: July 21, 2003.