This Is Alexander, He Makes Movies: FFC Interviews Alexander Payne 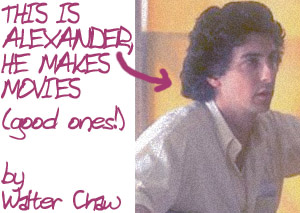 June 8, 2003|Eyes glowering under a shock of black hair, Alexander Payne, tall and angular, strikes a sort of middle-American Neil Gaiman figure, cutting through the crowds gathered for the 12th Aspen Shortsfest with authority and something like diffidence. Meeting in the lobby of the Wheeler Opera House, we go off in search of a shot of espresso; along the way he corrects that he didn't study Spanish Philosophy in college, but Spanish Philology; makes it a point to punctuate some statements with a companionable squeeze of my arm; and then says something sort of curious: "I don't know why you'd want to talk to me, Walter, I don't have anything interesting to say." I chuckled, of course, but he was deadly serious and would repeat the statement a couple of times. Judging it to be neither a strategy to avoid interviews nor a way to disarm a would-be interrogator, I took it as weariness with the entire junket/publicist/interview process.

The ironic thing is that Payne's films...there really isn't much to say about them that isn't already said by the film. One can comment on Reese Witherspoon's performance in Election or Laura Dern's in Citizen Ruth or Jack's in About Schmidt, one can go through the motions of eliciting the same sound bites about "being an actor's director" or "how did you meet your writing partner" or "what made you interested in the film," yet press clips seem to do precious little in unfolding what it is about Payne's work that makes it so painful and incisive. The chief criticism of About Schmidt, in fact, is that it's depressing when, ultimately, the message of the film seems to me to be infinite hope for the ability of a man to find purpose at any point in his life--no matter how empty that purpose may appear to his "peers." Payne is smart enough to engage in a different kind of conversation--I took his "I don't have anything interesting to say" as a challenge.

FILM FREAK CENTRAL: How has Spanish literature influenced the feeling and direction of your films?
ALEXANDER PAYNE: (laughs) Wow, I should have studied up for this, this is great. Well, my thesis film at UCLA was sort of a loose adaptation of an Argentine novel by Ernesto Sabato called El Tunel--he was to Argentine letters what Camus' The Stranger was to French existentialism. Kind of this terse, kind of hilarious, stark, post-war, slim novel. Beyond that it would be kind of hard for me to pinpoint influence.

And yet there seem to be many connections to French existentialism: your protagonists strive for meaning in the middle of meaningless actions and meaningless societies.
I would say this, that as good an observation as that is, it's only in retrospect that I'm able to mark those things in my work. There was a discussion, it's funny, at the Museum of Modern Art a couple of weeks ago, and I told the moderators that looking at my films I find this certain unease my characters have with the world--they find themselves uncomfortable with the world into which they're born.

It's that element of the archetypical existential search of your work that is attractive, I think, whether people know it or not.
Whether I know it or not, really, it's not something I strive for. Separating myself from my work I can see themes and elements emerging, but the act of creation is different and separate from the act of criticism and as I'm working, none of that enters into it and I think that's important. I think a lot of times that the work suffers for too much self-consciousness--that you can trace these things in my films really speaks to something like success for me in letting myself seep into my work. That's gratifying.

Tell me about your script for Jurassic Park III.
It was a job. It was four weeks, a nice paycheck, seemed like a good challenge. [Jim Taylor and I] thought we could help them out but they didn't end up using much of our stuff anyway. But we did enough structural changes that we got credit on it, which is good because you get residuals. 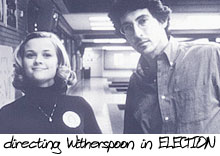 The film felt like a satire of that genre--enough so that it felt almost like a criticism of the audience.
I would say that what survives of our draft--I mean, look, I love movies, not just the ones I make... In fact, I don't like the movies I make very much... So when I was looking at the first two Jurassic Parks--the second one is an abortion, it has wonderful moments but you can't help but see missed opportunities, so when we were talking to [Jurassic Park III director Joe] Johnston, we were saying, "Give us an opportunity within this to make it different." We were hired for the character and humour, y'know, because the problem with the movies isn't the dinosaurs, it's with the characters and the dialogue, the human beings. We were hired for the human beings. So I said that it should have more the feeling of The Wages of Fear, you know, the feeling of King Kong mixed with The Wages of Fear. The eggs are sort of like nitro-glycerine--a look at what humans should and might do. A sort of grounding in reality of what might go on if you were on an island full of dinosaurs. We had a whole thing with the problem with mosquitoes, and how they would try to salvage parts of the ship to help their survival--but they didn't want any of that, they got rid of all of that, they didn't want anything that made sense. That director, Johnston, and the studio--they're not interested in movies, they're interested in theme park rides. I know that our script, and this sounds like sour grapes and it's not, is much more interesting. All they wanted was action.

The Wages of Fear works not for the action scenes, but for our investment in the characters involved in the action.
Exactly right. We were looking for something like that in our script and all they kept were a couple of lines. You know, recently, I caught up with Sorcerer for the first time.

William Friedkin's really underestimated remake of Wages.
Absolutely. I think [Friedkin's] To Live and Die in L.A. is one of the only worthwhile films of the 1980s, as well. It's hard to say that there are any great American films in the '80s, but I'd also toss something like Amadeus into the mix. Was Groundhog Day in the '80s or '90s?

Early '90s.
There you have it. You know, in the '80s I was at UCLA so I was able to watch older films on nitrate prints that the film and television archive had. Even now, four out of five films I see are old films--why see new films, new American films, y'know. I always keep up with Iranian films and anything that Zhang Yimou does.

What's broken in American cinema?
Basically, if I can sum it up in any way, although I have a lot to say about it, those eight multi-national corporations need film consumed as reliably as McDonald's needs bad hamburgers consumed reliably. So there's no impetus at all for film to be film, just film to be product. Let me quote Coppola: he believes that when you're given a problem, you're given a key to the solution of that problem. He feels by extension that it's no coincidence in the same horrible century that we're given world war, The Holocaust, the Information Age--all of which pose huge problems for mankind to figure out "who are we?"--is the same century that we're given the cinema. That within this extraordinarily powerful artform lies the key to our/the solution to our problem. But he said that in terms of American cinema, Sir Galahad is in chains. And who has him in chains? You can point to them: Rupert Murdoch, and Sumner Redstone, and Barry Diller--these robber barons, essentially, who buy and sell our culture like it's pig's feet. Not just the cinema but news media--this ultra-conservative, super-rightwing. I haven't read this book, What Liberal Media?, but if we thought the Reagan media was on bended knee...

Dan Rather referred to the beginning of "shock and awe" as "rocket's red glare, bombs bursting in air."
He said that? I think that Peter Jennings is the only decent one of the big three.

He's Canadian.
(laughs) You know, you can't just blame the government, you have to blame the media. The fact that there's been no opposition, you'd think that the media would roll in and fill that vacuum, but they haven't done so.

What's next for you?
We start shooting in September, a comedy, set in the world of wine tasting. Two guys go wine tasting for a week before one of them gets married. Nothing too serious. But our cinema has to get more serious--more political again and maybe in a direct, didactic way, but certainly in a metaphorical way. Maybe the economy going to hell will help our cinema. Prices start going down, we won't spend as much which means that we might have to become more human again at the movies and I think we're seeing signs of that in the last couple of years--going back to 1999, maybe.