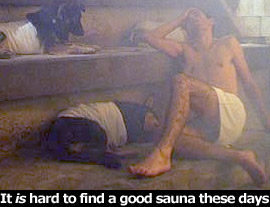 by Travis Mackenzie Hoover There's a lot to be said against Thom Fitzgerald's The Wild Dogs, a film that, when faced with abject poverty and suffering, doesn't really know how to resolve its feelings and compensates by resorting to bad doom-laden metaphors. But as it flails wildly in the hopes of hitting a target, there's no denying that the film occasionally does, and that when it does it often scores a direct hit. Even if Fitzgerald can't solve the problems of a crumbling Bucharest, he evokes the state of wanting to extremely well, thus saving his film from the sanctimony that another director might have brought to the subject.

Exploitation makes an appearance early on. Fitzgerald himself plays Geordie, a pornographer sent to Romania by a bullying boss; once there, he is to take advantage of the desperate population and make porn by any means necessary. Geordie is, naturally, conflicted, especially when he falls in with corrupt diplomat Victor (David Hayman) who introduces him to Bucharest's demimonde of players and prostitutes. All the while, Geordie is overwhelmed by the poverty--crippled beggars are everywhere--that lives on every street corner, and with the masses of wild dogs, which were one of Ceaucescu's little gifts to the city. He, like Victor's beleaguered wife Natalie (Alberta Watson), wants desperately to do something about what he sees but seems like a drop in the bucket in terms of power--a state which the film practically defines.

When Fitzgerald the director stays with this feeling of powerlessness, the film does very well by itself. A lesser filmmaker would have created a liberal superhero crusader for the innocent, but Fitzgerald knows it's not as simple as that; as he says in the production notes, "The simpler and easier the help, the more short-lived the results." Thus Geordie seems lost in a world of pain, eager to help in the long term but lacking more than short-term means. It's a situation in which many of us find ourselves and which we deny through temporary charitable buy-offs--they kill the pain for the moment, but how much good do they do in the long run? As long as it stays on this path, it's a disquieting film that confronts us with our powerlessness as individuals in the face of larger problems.

Alas, Fitzgerald doesn't trust this line entirely and has to create a Big Metaphor in order to render the proceedings artistic. We're granted a subplot involving a dogcatcher who refuses to catch dogs: Knowing that the animals roaming the streets are slated for destruction by Bucharest's mayor, he is unwilling to help them on their way to their doom. The connection is obvious: the impoverished Romanians are the dogs, and their deaths equal the death of the subplot's protagonist. The connection is a little too obvious to hold and its contrived nature knocks you out of the master narrative; its Hallmark sympathy is just the act of "simple," "easy" aesthetic help that the rest of the film is devoted to undercutting. But despite this troublesome gaffe, The Wild Dogs is disquieting like few others. Instead of congratulating us for approaching poverty, it asks us what we would and will do when faced with the misery of others. If it must be said that it's a little patchy, the bright patches are incriminating and provocative. They fill your head with questions as the lights come up. Originally published: June 26, 2003.