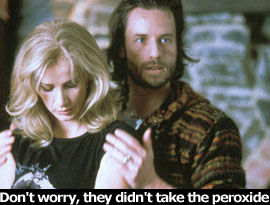 by Walter Chaw You'd think that POME ("Prisoners of Mother England") would be better at making a crime drama, but Scott Roberts's hyphenate debut The Hard Word is a flaccid ripper of Kubrick's The Killing thick in avuncular vernacular and notably thin of any real meat. Between a few funny throwaways (a character refers to Philip K. Dick's A Scanner Darkly, Dick's autobiographical survey of paranoia and drug psychosis, as a primer for modern marriage), and some decidedly David Lynch-ian violence, the picture feels a lot like a mish-mash of post-mod noir ideas (the butcher, the redeemed femme, cannibalism) arranged with little respect for rhyme and reason. Style over substance, the whole thing is delivered in accents so under-looped and thick that it occasionally falls out as a cast of Brad Pitt's Snatch pikeys performing Tarantino outtakes.

Three brothers (Dale: Guy Pearce, Shane: Joel Edgerton, Mal: Damien Richardson) are periodically released from prison by their smarmy lawyer Frank (Robert Taylor) to carry off a couple of heists, but when Frank starts an affair with Dale's wife, Carol (Rachel Griffiths), Dale begins to suspect their latest larceny may be their last. That's it; The Hard Word is so undemanding a film that the fact that this mismatched trio (one's the brain, one's the brawn, one's the butcher) are brothers is the only thing that explains their enduring partnership. Character development is left to our familiarity with genre while Carol, the only person to undergo any sort of appreciable evolution, essentially returns to where she began after realizing (one guesses) that a life of leisure is not for her.

Potentially thorny topics, like a weird Oedipal relationship that flowers between Shane and his prison counsellor and a budding love affair between Mal and a cherubic meteorologist, are left fallow, both of these subplots too shallow to counterbalance the convenient exploitation of Dale's sexual jealousy. Though The Hard Word tries for a little purchase in its violence (explosive shotgun blasts and a chef's special that makes sport of cannibalism in the spirit of "The Simpsons" and "Üder-braten"), the effect of characters and scenarios rendered in tacit genre strokes is the sort of disinterested familiarity that robs violence of its weight. Not a complete wash, The Hard Word will be best remembered, if it's remembered at all, as another independent genre picture (thinking of Equilibrium, now) with an overqualified cast, a freshman director, and a permanently dusty home on the rental shelves after a quick theatrical turnaround. Originally published: June 27, 2003.