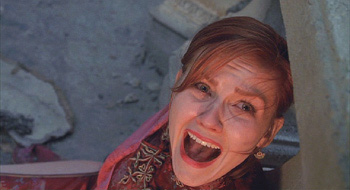 by Walter Chaw Sam Raimi's banana yellow, 1973 Dodge 88 Oldsmobile is Uncle Ben's (Cliff Robertson, himself the happy--however briefly--subject of a lab experiment in 1968's Charley) ride in Spider-Man, and it is as canny and appropriate a cameo as any since Hitchcock's greedy quaff of a champagne flute in Notorious. The good news is, the appearance of said vehicle is as clever as the rest of Spider-Man, that rare variety of modern popular film boasting of subtext and tricky riptides tackling puberty and abrupt Oedipal splits with good humour, insight, and grace. If not for the abominable CGI (really only overused in two scenes), I would have a hard time finding fault with Spider-Man, the model comic book movie in its surprisingly dark tone, lively pace, shrewd performances, sense of humour, and sly intelligence.

Young Peter Parker (Tobey Maguire) is a science geek bitten by a genetically spliced spider while on a field trip. Old Norman Osborn (Willem Dafoe) is a science geek who tries to prove that his human "enhancer" doesn't also cause raving insanity. Both fall into a deep sleep and wake to find themselves on opposite sides of the super-hero/arch-nemesis divide: Spider-Man and Green Goblin, respectively. For that guiding tone of romance so vital to the Spider-Man mythos, Peter loves Mary Jane (Kirsten Dunst) and is best friends with Norman's son, Harry (James Franco), who, not being a geek, has Mary Jane's eye.

Spider-Man is about growing strange hairs, getting a more mature body, and finding it necessary to hide new secretions from the parental units. It is about the exhilaration of new freedoms ("Yee-haw!" is the correct term when discovering that one can climb walls) tied with the terror of uniqueness and the burden of responsibility. Two father figures die over the course of this film, hastening the maturation of a pair of young men and--because the source material for this film is often as interesting as David Koepp's screenplay adaptation--they are as complete a catalyst for change as the bite from a super-spider or a glass chamber full of green supergas.

There is a tremendous amount of character development in Spider-Man--credit owed almost entirely to the immaculately cast Maguire, Dafoe, Franco and a riotous J.K. Simmons as "Daily Bugle" editor J. Jonah Jameson. There are scenes in Raimi's film that just wouldn't work without Maguire's particular gift for finding that delicate space between cynicism and naïveté and others that would resemble Nicholson's nigh unbearable performance as The Joker if not for Dafoe's wily reserve. Robert Louis Stevenson once expressed regret that he ever described a physiological change for his kindly Dr. Jekyll's metamorphosis into the evil Dr. Hyde; when Willem Dafoe, in perfect Steppenwolf method, finds his raging Id (in another Raimi hallmark: the possessed mirror), Spider-Man finds the rationale behind Stevenson's regret--and a true balance of comic book melodrama and dramatic impact.

The cue to the film's visual style comes in a sequence dedicated to Peter's design of his costume, a proudly cheesy sketch-pad montage that locates the picture as a comic book panel come to life in full lurid glory. Spider-Man is an exercise in hyperrealism and Raimi is a director specifically suited to this style of film with his ability to frame cogent action scenes (the otherwise ordinary For Love of the Game features some of the finest baseball sequences ever created), his timing and sense of humour (the three Evil Dead films), and his love of the psychological complexities of a mask fetish (see also, the underestimated Darkman). With the shoo-in for this year's MTV Movie Awards Best Kiss, scenes borrowed from the first films in the Batman and Superman franchises (but expanded and improved upon), and an Errol Flynn "Tally Ho!," Spider-Man is a respectful and exceedingly entertaining film that most shockingly doesn't require the dim-witted "leave your brain at door" apologia so popular around this time of year.

In its relative (but different) success, I'm reminded of the latest film by another indie auteur who similarly started out with a brilliant low-budget cult gross-out pic (as Raimi did with The Evil Dead): Peter (Bad Taste) Jackson's The Lord of the Rings: The Fellowship of the Ring. Fans should be happy with Spider-Man, and neophytes pleasantly surprised. Originally published: May 2, 2002.

THE DVDs
FULL SCREEN SPECIAL EDITION
by Bill Chambers So we kicked up a big stink because our review copy of Spider-Man is the "full screen" version. Terrified of endorsing non-OAR (Original Aspect Ratio) DVDs, regardless of the degree of compromise in reformatting a given film to fit a standard television screen (Spider-Man was composed for 1.85:1 projection), we have linked only the widescreen edition at Amazon above. But when Columbia TriStar gives you lemons, you make lemonade, so this review will focus on the bonus features of the 2-disc set, which are shared by both the widescreen and fullscreen releases. For the record, the 1.33:1 transfer looks damn-near perfect, with richer colours than exhibited in the cinema.

Surprisingly, the fullscreen DVD retains the widescreen's Dolby Digital 5.1 track: if an approximation of the theatrical viewing experience is of no interest to Joe VHS, why should an approximation of the theatrical listening experience be any different? Nevertheless, the mix is not up to the standards to be set by Star Wars: Episode II - Attack of the Clones or The Lord of the Rings: The Fellowship of the Ring - Extended Cut--both of which I've had the opportunity to view (reviews forthcoming)--in the coming weeks. There is some effective use of the split-surrounds during the Green Goblin's 'conversations' with Norman Osborn in Spider-Man, and Gobby's maniacal laugh is often delightfully omnipotent, but very little else about the audio is transcendant.

Disc 1 supplements the film with two feature-length commentaries, pop-up factoids in a Marvel-style font ("Weaving the Web"), and "Spider Sense" "web-i-sodes" (making-of vignettes) that cue up when you click on the Spidey-face icon--which appears so infrequently that I wish a separate index had been prepared for the impatient, as on the World is Not Enough disc. (Not that they're worth the effort.) Director Sam Raimi and co-producer Grant Curtis were recorded together and producer Laura Ziskin and actress Kirsten Dunst were recorded together separate from Raimi and Curtis, with the bland results combined into one yakker. Ironically, Ziskin reveals more of Raimi's process than Raimi does (illustrating, for instance, his dual-editor conceit, wherein he hires two people to cut the picture individually and then picks and chooses the best parts of each end product to arrive at a finished film), while Dunst--well, we've never spoken ill of her at FILM FREAK CENTRAL; let's keep it that way.

The second track belongs to (legendary) visual effects supervisor John Dykstra and his two underlings, Anthony LaMolinara (animation director) and Scott Stokdyk (another F/X supervisor). Although the trio are good-humoured, their conversation only sustains our interest for so long, given that it's always more interesting to see these types of artists in action than to hear them talk shop. Filmographies for the main cast and crew (under "Character Files") plus eleven Spider-Man TV spots, music videos for Chad Kroeger & Josey Scott's "Hero" and Sum41's "What We're All About," and trailers for Spider-Man, xXx, Stan Lee's Mutants, Monsters & Marvels, Mr. Deeds, Men in Black II, and Stuart Little 2 round out the first platter.

Disc 2 is divided into two sections arbitrarily assigned personalities: "Web of Spider-Man," dealing with the comic, and "The Goblin's Lair," concentrating on the Raimi film. "Web..." has the better extras. Under "The Evolution of Spider-Man" you'll find Josh Dreck & Eric Matthies's 25-minute "Spider-Man: The Mythology of the 21st Century," an excellent primer on the origin of the character and his various transmutations over the years delivered through interviews with a few of the good men who drew him, such as John Romita ("The Norman Rockwell of Marvel," says Todd McFarlane, meaning it as a compliment) and his same-named son. Addressed at the end of this piece is "Issue 36," the recent Spider-Man adventure scripted by J. Michael Straczynski that dealt with 9/11 head-on. (Aside: here and elsewhere, Stan Lee is the lone interviewee shot in 16mm.)

Next comes the exhaustive "Spider-Man Archive," which provides, with astounding precision, synopses for every issue (as far as one can tell) of Spidey published between 1963 and 2002. Other step-frame galleries under "Evolution...": Rogue's Gallery (self-explanatory; offers history and weapons/power statistics for each baddie); the curiously compiled "Artist's Gallery" (a.k.a. "Peter's Darkroom"); and "The Loves of Peter Parker"--profiles of Betty Brandt, Gwen Stacy, The Black Cat, and Mary Jane Watson. Capping off the "Web" section proper are hints and tips for the Spider-Man videogame from Activision. As an on-again/off-again Spider-Man reader, I appreciated the extent to which this DVD filled in gaps in the mythology for me.

"The Goblin's Lair" contains two weak promotional specials--"The Making of Spider-Man" (25 mins.) and "Spider-Mania" (40 mins.)--produced for HBO and the E! Network, respectively. Both waste their running time rehashing the movie's plot, but at least E!'s making-of takes the fan's perspective into account. Tributes to Sam Raimi ("Director's Profile") and Danny Elfman ("Composer's Profile")--seven minutes apiece--are fawning things, with the edge going to the Elfman segment for its willingness to hear instruction from the former lead singer of Oingo Boingo. Screen tests for Tobey Maguire (in which he goes Bruce Lee (okay, maybe more like Bruce Li) on a band of thugs bleeped as often as Ozzy Osbourne on MTV), JK Simmons, the CGI Spider-Man (phenomenal--trust me), and key make-up and costumes and a lame 3-minute gag reel finish off the serviceable package, not counting ROM-enabled weblinks, videogame promos, "comic to film comparison," and a nifty option to scratch your very own commentary track for Spider-Man. Originally published: November 1, 2002. 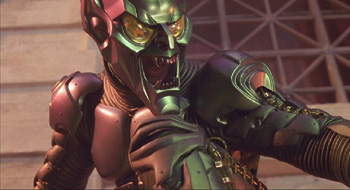 SUPERBIT
by Bill Chambers Owners of the original Spider-Man DVD who don't have any disposable income and consider themselves bigger fans of Spider-Man the movie than of Spider-Man the character are urged to trade up for the Superbit release, available just in time to expand the vortex of hype surrounding Spider-Man 2. Although captures weighing the fullscreen version of the SE (reviewed below) against the Superbit's 1.85:1 anamorphic widescreen transfer wouldn't prove much other than the disparity in aspect ratios, the Superbit platter boasts a much more expressive colour palette, blacks that approach pitch for a change, and detail so microscopically fine that, while Gobby's costume now officially looks stupid, the CGI has, conversely, never been more convincing, since all that compositing work is finally discernible. (The Lord giveth...) If the disc's DTS track is superior to the 5.1 Dolby Digital alternative found on the previous DVD (and included here as well), the mix still sounds a bit rushed--it's the image that benefits most dramatically from the Superbit treatment. Violating their no-extras policy for Superbit titles, Columbia Tri-Star has tacked on a chummy commentary from stars Tobey Maguire and J.K. Simmons, who remind listeners off the top that Spider-Man was actually their second film together after The Cider House Rules. What Maguire lacks in humility he makes up for in dry wit ("This is Times Square...Burbank"), and for all his movie-star petulance (sustained grudges about the day they made a cast of his torso and the unreliability of the Spidey costume's zipper), he redeems himself in such pithy summaries of his good fortune as his closing statement: "It's cool to play Spider-Man." Originally published: June 14, 2003.