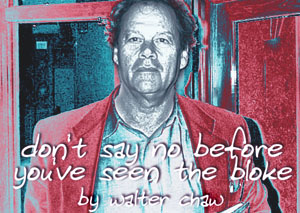 June 15, 2003|A large man in a rumpled suit with a large clutch of papers and a VHS screener tucked underneath one arm, Bruce Beresford, the Australian director of some of the best films of the past thirty years (and some of the worst films of the last ten), is the model of expansive, self-deprecating charm. An experienced opera director and a member of the Aussie New Wave, which began filling the void in the late-'70s and into the '80s left by the American cinema succumbing to the call of corporate-fuelled decision-making, Mr. Beresford--whose made-for-cable epic And Starring Pancho Villa as Himself is set to debut in the near future--sat down with me at the 12th Aspen Shortsfest to talk about everything from the topicality of his Breaker Morant to the inexplicability of his Double Jeopardy.  I started with the underseen Beresford gem The Fringe Dwellers.

BRUCE BERESFORD:Where could you have seen The Fringe Dwellers?
FILM FREAK CENTRAL: Import VHS in the late-'80s--we had a good local video store before it was swallowed whole by Blockbuster.
BB: (laughs) I didn't know it was ever available here at all. An all-amateur cast of Aboriginals. Kristina Nehm was amazing--it was tricky because everyone said it couldn't be done, you see, because every time I said that I was going to do a film with an all-Aboriginal cast--not that they were amateur, but Aboriginal--they said, "Oh, you can't make a film with Aboriginals, you know, you could get away with one or two maybe, but not a whole cast. They won't show up, they won't be reliable, they won't learn their lines, they'll shoot for two weeks and disappear," you know, all this kind of stuff. It was complete prejudice, none of it turned out to be true of course, but that was the kind of thing that you fought against. It was very tricky on top of the climate of misunderstanding. I mean, these guys were from reservations and country towns and the like on top of everything else so they weren't at all experienced performers.

That sympathy for aboriginal cultures translates into your handling of the Iroquois in Black Robe.
I guess it's of interest to me. When I was twenty-four I went to Nigeria for a few years working as a film editor and it was such a culture shock, growing up in Australia and suddenly being the only white man in this unit full of black men. I developed, I think, an interest and appreciation of cultures that were completely different than mine and from what I was used to. I found them intriguing, to try to work out why people valued different things, how they thought of things in different ways, how environment and culture conditions people. Black Robe, I hope, doesn't demean the Indians in any way--they were a tough lot, and complicated.

Does your experience in Nigeria inform what seems to be a recurring character of "the outsider" in your films?
I suppose it does, maybe unconsciously it did. I was there for a couple of years and there were a couple of other Europeans living in the town I was in, but I didn't mix with them much. You do, you know, start to see things from a different point of view.

You made Mr. Johnson much after you'd been to Nigeria.
Yes, right--that was, what, ten years ago, but I read the book while I was in Nigeria because the guy who'd written the book, Joyce Cary, had written that based on his own experiences and I knew where it'd taken place, I could tell from the book, and we filmed in all the areas where it'd happened. There was a reunion of sorts with the mates that I'd worked with--we shot a few hundred miles from the town I'd lived in before, but some of them came out to see me. Nigeria at that point had really gone downhill a lot. When I was there in the Sixties, there were phones, railways, buses, communications--all sorts of things. When I was back to make Mr. Johnson, all those things had gone--nothing left, no police even--terrible. To send a message you actually had to use a messenger.

Without any kind of musical training, you've become well-respected as an opera director. Did you find your experience as a film director compatible somehow?
I don't think it's really that compatible, I suppose. I'd really been interested in opera when I was about sixteen, and I really like staging them. I don't know how good I am at it, but I've enjoyed doing them and it's a bit like staging a play, really, I'm aware that everyone's watching from a fixed viewpoint and that really challenges you to get your effects through different means. Lighting, the sets, and lighting patterns, and stage groupings, and of course the music, but it's fun to do--but doesn't relate too much to film. There is one thing, though, I suppose, and that is that I always try to get my singers to don't do that ridiculous over-acting that they tended to do though it's much less common these days. The thing is to try and get them to avoid grand gestures and ridiculous melodramatic positionings, it tends to work better.

Did you see The Turandot Project?
You know, I haven't. I've seen numerous productions of "Turandot" of course, but not [the film by] Zhang [Yimou]--he's a brilliant director, I just saw Hero. It was fantastic. (laughs joyfully)

Tell me about the Australian movie culture in the late-'70s.
Basically the government made money available through the arts council so instead of people applying for arts council money to be painters, or for the literary grant and stuff like that, they set up a special fund to kick films off. It was quite an enlightened sort of move and the thing was that you could go along to this sort of government bureau with scripts and stuff and get finance, or part finance for films. It kicked off the whole industry, kick-started it, because now they do it less but of course now it's established and needs it less.

Your early films, and I'm thinking up to Breaker Morant, have a roughness about them--is that based on any sort of vérité influence or is it more a product of the budgetary constraint?
(laughs) Low budget. It's not conscious influences if there are some, but of course I always did see a lot of films. I was film-crazy from the time I was a kid--the documentaries that I saw as a kid were all National Film Board of Canada things. Television didn't even come there until the late-'50s. There were movies that always made me want to be a director, you know. There was a film that wasn't very good by John Ford called They Were Expendable. It's set in the PT-boats in the Pacific--in fact it was on television a few weeks ago and I watched it--it's not a very good film but there are some brilliant scenes and the way that the emotions were handled I thought, "Gosh, I'd really like to do that."

I was stricken with the moral and ethical similarities between the world of Breaker Morant and now, in the midst of the Iraq War.
(enthusiastically) Yes, that's true. There were even mineral rights at stake in the Boer War, weren't there? But I suppose those issues recur through history. The Boer War should never have happened, y'know. At the time the British went down there to fight the Dutch, there was a huge outcry in England. It was a terribly unpopular war. Sort of like this thing now--there were big movements against it. I remember going to work for this older gentlemen who, God, he could remember that period. There were huge demonstrations against it.

I read that you tried to cast Daniel Day-Lewis as David in King David.
I did. What happened only was that I said to Paramount at the time that we should really use an unknown in King David--because any actor that you use for such a famous figure, you're going to get a laugh. You have to put a face in that no one associates with anything else and they said that's all very well, but who? So I say that I saw this young actor in a play in London, he's never made a movie, and you should use him. And they say no, they don't want to use an unknown, but I say that before you refuse you should come to London and see him. Saying "no" before you see the bloke is I think silly and shortsighted--come and see him and then say "no" and I'll accept it. But they never did come. Daniel really wanted to do it, too, but honestly I don't know that he would have helped that. (laughs)

Tender Mercies has one of my favourite lines: "I don't trust happiness."
Yes, typical Horton Foote line. After I'd done Breaker Morant, a huge number of scripts came flooding into me--dozens and dozens. I sat down to read them and most of them were genre pieces I wasn't that interested in, y'know, and then the script for Tender Mercies turned up and I rang up the producers to say that I'd do it before I'd even finished it. I was so excited by it, just wonderful, economic work--not an awful lot to it, very tight.

On the flip side, there's Double Jeopardy. What happened there?
(laughs) Phew, Double Jeopardy, what a scream. I was hoping you wouldn't bring that up. My agent thought it'd be a good idea to do a commercial film and I've got nothing against big commercial slam-bang films--there are good ones, you know. Most of them are terribly formulaic and not very interesting, but I've got no particular prejudice against them, so I was quite happy to do one. But Double Jeopardy, as soon as I got into doing it, well, the first thing you realize is that it doesn't make any kind of sense at all. I was dealing with all these executives at Paramount who thought much more highly of the script than I did. I thought it was maybe a passable commercial script that needed a lot of work and they thought it was a great commercial script that didn't need anything done to it. There were a helluva lot of battles but that's true whenever you do one of those studio films--they get very anxious, very, very cautious. You get a lot of lunacy, I think, because there's so much at stake.

Bright spot about Double Jeopardy, of course, is the introduction of Bruce Greenwood to American audiences.
It was a helluva struggle getting Bruce. I'd seen him in a few Canadian films and we had to get someone to play the husband that the audience didn't think would reappear--of course the trailers give it away anyhow, but that's another issue. If you cast a well-known actor you know he's going to come back. So you need a good actor who no one would expect to see again--so we tested a variety of guys and then I said that there's a Canadian named "Bruce Greenwood" that you should use. And they absolutely refused--they said that you can't do that and I said, "Look, let me do the test and if you don't like him you can say 'no' and I'll accept it"--it was King David all over again. So I call [Paramount head] Sherry Lansing and say that these guys are being mad, so she let me test him and she called me from the viewing theatre and said, "You were right, cast him." He's a terrific, terrific actor, (laughs) so there's a bright spot in every dark cloud.